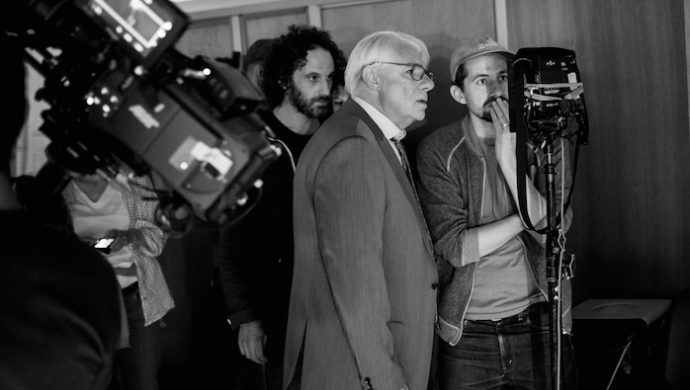 In the past few years Tom Haines's music video outings have been showcases for some big characterisations, from the privileged thug in UNKLE's Money And Run, to the hallucinating raver in Jon Hopkins's Collider.

Now he's had the chance to make a video for new music from New Order - one of his favourite ever bands – and he's created another memorable character with an ageing TV host who, after taking some bad news, slips into his own world of entertainment at the studio. So we asked Tom how the process came together, and how he came to cast his producer Sarah Tognazzi's actor-director father Ricky in the lead role.

Promo News: This is your first music video since Jon Hopkins’ Collider over two years ago. What’s the appeal for you of making them these days?

Tom Haines: I still love music videos, still believe in the power of them, and get inspired when I see something incredible. I think it’s a great place to try out ideas, grow as a filmmaker and get exposure you can’t with other media. As Emily Kai Bock said at the MVAs a couple of years ago, they are Art and should be regarded as Art in the same way features are. But that said, the path can be treacherous.

Where did the story come from - inspired by the song or something you’ve wanted to make for a while? And what was the key thing that made it appealing to New Order?

I took my cues from the Italo Disco sound that the track has. It conjured up something fanciful, laced with acid colours, bordering on tacky, but then there’s the slightly melancholic lyrics Bernard sings which underpin it – classic New Order juxtaposition – and through pitching ideas at them and discussing them with Bernard, I arrived at this character.

"Music videos should be regarded as Art in the same way features are. That said, the path can be treacherous."

I love films and characters that traverse backstage and frontstage within a narrative, like Network, or Philip Baker Hall in Magnolia - there’s something fascinating about the private interior lives of public personalities. And then because of the Italo soundtrack it felt natural to give it a European feel, place it in that weirdly saturated world you might discover zoning out in a hotel room on your holidays.

Some Seventies-era British TV entertainers have become associated with terrible acts and abuses of their power. Your character seems more benign, but how should we read his relationship with the young dancer?

I’d like the reading to be benign. I didn’t have any subtext in mind, or even anything romantic. I just wanted her to be the only one who ‘saw’ him, and felt there was something sweet and sincere within that, and it could be expressed platonically.

"Sarah Tognazzi was understandably quite apprehensive about working with her dad - but I thought he'd be perfect."

Who did you cast in your leading role, and did you suggest that he model his performance on any particular old school TV star?

The lead actor is Ricky Tognazzi, father of MVA winner Sarah Tognazzi. Originally I’d approached him through Sarah [who produced the video] for ideas for other Italian actors – Sarah was understandably quite apprehensive about working with her dad. But I looked up his work and talked with him on Skype and thought he’d be perfect. In fact I thought, we’d be really lucky if he says 'yes'. But he was into it and gave us 100%, which on a huge promo day, is not an easy thing when you are in every shot.

Where did you shoot the video and what were the biggest challenges of the shoot?

We shot in the national TV station of Slovenja – the Slovenian BBC if you like. There was a station manager there who was a huge New Order fan and backed us shooting there, which was unprecedented. Division, our service company, said they don’t even let big paying commercials in.

We set-built on Friday and Saturday and shot on Sunday, which meant that the studios were mostly unused and we could have the run of the entire building. In terms of challenges, there were so many moving parts that it was a lot to cram in to one shoot day - and I was nervous about the choreography, which I’ve normally ad-libbed but here I had to make sure it all ran like clockwork.

You have a more linear Director’s Cut with an additional scene in the TV host’s dressing room where he inhales oxygen. Why is that important for you in telling the story?

I’d always seen the video as more linear. At one point Steve Annis [the DoP] and I even discussed the possibility of a one-take, but that would have been suicidal. I felt that as a linear edit you get more of a connection to the character that then builds to a more satisfying pay-off at the end. The oxygen mask came to me as an anecdote from an industry contact that works closely with these type of personalities, and I fell in love with the idea of our host needing a very distinctive crutch for his malaise.

Francis Wallis teams up with long term collaborators The Bloom Twins, in his ethereal, …

Charlie Sarsfield directs the third instalment of Apple Music's The Agenda Live, for "Queen of The …