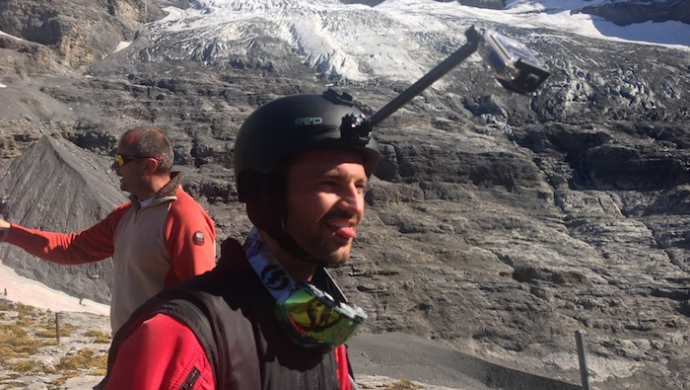 With a terrific campaign orchestrated by this year's UKMVAs's Best Commissioner winner, Dan Curwin, each new Rudimental music video has become an event, and a must-see. They've told action-packed stories in all corners from the globe - about breakdancers in the Phillippines, one-legged BMXers in LA, and Shaolin tiger-carers in Thailand. How do you top those?

The answer, for the video for Free (featuring Emeli Sandé), was to turn to Stu Thomson, extreme sports director par excellence, who came up with an idea to film surely the most extreme sport of all - wingsuit flying. The video sees wingsuit flyer Jokke Sommer flying across the Alps from the Eiger - filmed by another wingsuit flyer travelling behind him. And it also incorporates a storyline of a bullied young boy, finding another kind of freedom on the roof of a tower block, back in London.

We caught up with Stu Thomson to find out more about his credentials for making the amazing video for Free, as a former BMXer who has gone on to direct acclaimed Red Bull film Imaginate - and how he made the Rudimental Free video.

Stu Thomson: I recently filmed and directed a Red Bull viral project called 'Imaginate' with one of their Scottish athletes, Danny Macaskill. The film has had some pretty amazing success since it's launch earlier this year with 10 million YouTube hits so far. As a result Red Bull decided to run a shorter version in UK cinemas, to run alongside the trailers. The Rudimental project was all just a product of circumstances and good timing really, I had began working with the team at Mind's Eye TV at the same time as they met with Rudimental's commissioner Dan Curwin. Dan had just seen Imaginate in the cinema when they met, and when my name came up in conversation he asked if I'd pitch an idea for the new video.

The concept and shots are breathtaking. Where did the idea come from?

I come from a background of extreme/action sports – I was a professional downhill mountain biker many years ago. So the idea to feature a wingsuit came to me straight away as soon as I listened to the song. It has a big epic feel to it that suits big landscape cinematography, and that's where it took me when I listened to it. It perhaps sounds a bit of a cliche, but I think as a general belief in human nature there would be no greater feeling of freedom than to fly. So the name of the song and the lyrics made the flying theme and a wing suit the obvious choice to me.

I'm assuming you weren't flying!? If not how did you over come the problem of not being "on set" for half of the music video?

It was mostly really down to good planning, in addition to also having a helicopter with a cineflx mounted that we used for some of the shots. Having worked with many action sports athletes before though, I know that they are generally passionate and educated on filming and showing off their own sport to it's best. Many of them now make a career from their popularity on YouTube rather than competition so there is both enthusiasm and knowledge of filming there.

With that in mind the first port of call was to contact Jokke Sommer – the flyer I wanted in the film – and chat over the details of shooting POV style footage from a following wing suit flyer. Obviously I have to make sure everything fits the concept and narrative but it is Jokke who knows the jumps routes and what is possible for him to do.

Jokke and our flying camera man Ludo brought so much to the video. We'd set up each jump (3 in total), know the route they would take so we could set up ground camera points and then we'd be in constant contact leading up to the jump from our helicopter. After each jump Ludo would then show me the footage and we'd talk through what we needed from the next jump. For me the footage these guys get makes it more special and really helps the viewer imagine actually flying.

You have an obvious love for storytelling. Why do you think that is?

I think it stems from beginning my filmmaking career making short web clips of bike riding.  In the world of those types of sports (BMX, skateboarding, etc) there are millions of videos all over the web and so much talented cinematography on display. As incredible as this can sometimes be, I've always felt that viewers really identify with even the simplest of story lines. Over time I've tried to develop this with my own filmmaking as its both something I love doing and it also set my work apart from most in that industry. As I've now moved away from solely sports work I've continued to build on it. With the Rudimental film, as amazing as the wing suit shoot in Switzerland was, as a director I have now done that type of shoot for many years. It's often the narrative side where I get excited and the shoot in London with our young actor Lewis was no exception.

With a new name, Cut Media has a new beginning, what's next for your production company?

Cut Media has always been an exciting project for me. Initially starting as a mountain bike video website in 2008 (named MTBcut) we soon began to create promos for cycling brands and it has now grown into a great little creative team and production company. We've worked making promos for a wide range of clients over the years, and since the work with Danny Macaskill reached a wider audience it has really taken off. I do enjoy many of the other sides of a production as well as just directing so it's been a fun trip and great learning process. This year though I've also been working with Mind's Eye TV who are London-based (as opposed to Scotland where Myself/Cut Media are from), It's been a new experience for me and something I've really enjoyed. The Rudimental video has been our first job together and working with a bigger crew and being able to focus on just directing has been refreshing. I'm really happy with how it's been working out and the potential for the future looks good!

* Check out Luke Tierney's blog, Word Is Cheap, or his Twitter @wordischeap, for more thoughts on his favourite music videos.