The Stones, Obama, Cuba and me - Paul Dugdale on making 'Olé Olé Olé!' 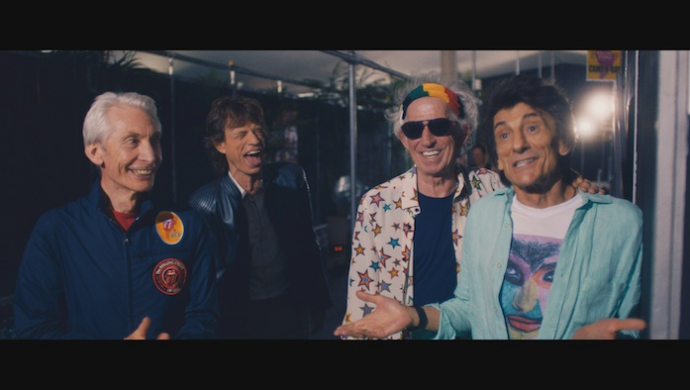 They have been together more than fifty years, but The Rolling Stones keep rolling on, hungry as ever. Their latest album Blue & Lonesome came out last week, together with a video starring Kirsten Stewart for Ride Em On Down directed by Francois Rousselet. And a new documentary has also just been released that chronicles a remarkable Stones tour, even by their standards.

The Rolling Stones Olé Olé Olé!: A Trip Across Latin America is the story of the band's tour of early 2016 through 10 Latin American cities, culminating in the Stones' first ever concert in Cuba, in front of an estimated 1.2 million people.

Paul Dugdale, who had worked with the band several times before, including filming their Hyde Park shows in 2014, was tasked with capturing this unique tour, and its outstanding climax. One of the UK's top live concert directors, Dugdale had a broader brief than usual in that Olé Olé Olé! draws upon the people and the places, the local cultures and the bond between Latin American fans and the band, as well as featuring numerous exhilarating performances.

Promonews talked to Paul Dugdale to find out more about his experience working with the greatest rock 'n roll band in the world, on their latest, greatest adventure - and how Barack Obama's visit to Cuba on the same day of the concert nearly derailed the project.

Promonews: How did the project come about? And how much time did you have to prepare for the shoot?

Paul Dugdale: We had an existing relationship with the band from previous films so for this one they reached out direct to us around the middle of 2015, planting the seed that they might play Cuba in the spring of 2016, and that perhaps we should think about ideas for a new project.

From when [executive producer] Julie Jakobek called me to say our treatment was green-lit, it was literally a month to the first shoot day at the end of January. So it was an incredibly intense four weeks of pre-production, for what was a logistically incredibly broad and logistically challenging film: ten different cities with multiple contributors, locations, and the biggest rock 'n roll band in the world thrown in for good measure.

PD: Yes, the Cuba thread of the story just seemed too good to not capitalize on, but at the same time we really didn’t want to make a straight tour film. Not that there’s anything wrong with that, but for this band it's really been done to death over the years. So we saw it as an opportunity to cast our net wider and explore the people they meet and the bands relationship with Latin America as a whole.

Themes of rebellion are so prominent in most of these countries, and with many of them having literally banned rock 'n roll in recent history, it seemed like a great opportunity to tell that story and hold a mirror up to the ultimate rock 'n roll rebels themselves.

• It’s subtitled ‘A Trip Across Latin America’, but is the focus primarily on the show in Cuba?

PD: I describe it to people as being a film about the band's journey up to playing Cuba. The circumstances and scale of the Cuba show are really unique, and it’s certainly the dominant thread in the film. The ‘trip’ provides greater context and helps give the significance of the Cuba show context, because we are able to dig deeper into certain themes along the way and learn about other stories each of which supported this sense of rebellion in some way.

• The concert in Cuba happened at a critical moment in the country’s history. How did you incorporate that huge political and cultural moment into the film?

PD: Well, that part was a little more stressful than we had anticipated. When the idea to play there originally came up, it was because diplomacy between Cuba and the United States was thawing a little and it made doing a show of this scale with a British band viable. It’s not the first time British artists have played there of course, but doing something of this level of production and scale is a whole different ball game. They reported 1.2 million people were in attendance so it felt like it affected the whole of Havana.

"The gig was pulled [when the Obama visit was announced], and it was genuinely a possibility that it might be cancelled indefinitely" - Paul Dugdale (centre)

A date was set for the show but then out of the blue it was announced that Obama was going to be the first US president in 80 years to visit Cuba. At first that was great for the film, but he wanted to go on the same date as the gig. The two things happening at the same time was impossible for the Cubans to manage so the gig was pulled, and it was genuinely a possibility that it might be cancelled indefinitely. The result for the film was way more genuine jeopardy than we had bargained for. But in doing so it really put a microscope over what was happening in a political and cultural sense, and it made the whole concert and the band’s visit incredibly poignant.

We already had someone shooting in Cuba for weeks ahead of the show capturing the build up, so we were incredibly lucky to essentially have someone there on the ground with a visa and allowed to film from before, during and after the Obama visit was announced. This allowed us to get incredible reactions and genuine feeling from the people of Cuba themselves, real and raw. These genuine reactions are an important barometer to the feeling of the country. Myself and the film’s incredible producer Sam Bridger thought it really important to tell a lot of the political / cultural aspects of the Cuban story through the eyes of real working people and collect honest unfiltered reactions which are sometimes difficult in a nation ruled under those political circumstances.

• What was the logistical challenge of shooting in Cuba? Was it much more difficult to achieve your usual high standards of production?

PD: It was a challenge but the production company JA Films and the team that myself and Julie Jakobek were lucky enough to work with, particularly line producer Simon Fisher were utterly incredible in executing something that was a total logistical nightmare. Just booking hotels at that time in Cuba took much more of their time than it should have, but again its something that I’m incredibly proud of that we were able to make something that ended up pretty uncompromised under very difficult circumstances.

• What’s it like working with the Stones? How hands-on do Mick and Keith get when it comes to editing their performance?

PD: We have a good relationship after having made four films now, so it’s a real pleasure and all pretty relaxed and jovial to be honest. It’s certainly a collaboration and conversation rather than them being too overbearing which makes it really pleasurable.

• What is the best environment to enjoy 'Olé Olé Olé!'?

• The Rolling Stones Olé Olé Olé!: A Trip Across Latin America, out now on DVD, also available to view on Channel 4 on demand in the UK until mid-December 2016.