Steve Glashier - Five Videos That Made Me 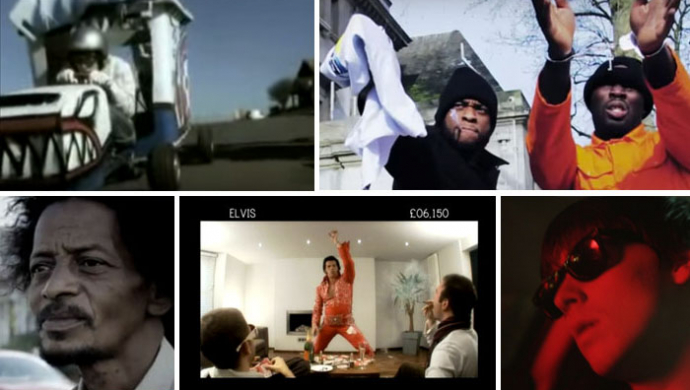 Steve Glashier is one of the UK's most prolific music video directors. He's made hundreds of promos for a hugely diverse range of artists, from Fatboy Slim to Blood Red Shoes, South Central to Chrissy Hynde, and many more - but he has also rigorously maintained his non-conformist status over the years.

Mainly working out of Brighton (although his and partner Sean Stuart's company is called NTSH London) his impressive output has been matched by his often iconoclastic and controversial concepts. His talents extend to directing and producing the music TV show The Porter Report and launching a parallel career as a stills photographer.

Now he has relocated to somewhere even cooler than the Sussex coast – Berlin. A new branch of NTSH will open in the German capital early next year, while NTSH has also signed a raft of new directors to their roster.

So we thought it was high time that we had a proper catch-up with Steve. And with his depth of experience of music videos in the past decade, we asked him to look back and talk about five crucial works from his career - starting at the start, with his rip-roaring 'wheelie-bin go-cart' video for Goose's Black Gloves.

Steve Glashier: This was my first commissioned video. I started making music videos on a whim in Brighton back in 2006. Self-taught would have been an exaggeration at the time, when really I had no idea what I was doing or what was involved in making videos. Nevertheless, I launched myself into whatever I chanced upon and within my first year I had completed a shoot for Blood Red Shoes that lasted 22hrs, as well as a GameBoy Orchestra come mosh pit for DJ Scotch Egg.

I was becoming increasingly curious as a videographer and wondered what to do next. At the time I’d heard the Holy Grail of videomaking was to do a Fatboy Slim video. I decided to go to Skint Records with an idea for a video - Wheely Bin Races – and pestered them until they gave me something. I didn’t get the Fatboy Slim video, as they didn't have a record out, but they commissioned it for their new signing Goose instead.

"It turns out if you get someone to wear a hi-viz jacket, you can do whatever the hell you like."

We shot the video over two days across Brighton, blocking off streets, we ran riot across the city. We didn’t have any permits, but as it turns out, if you get someone to wear a hi-viz jacket, you can do whatever the hell you like.

Recklessly, we drove converted wheely bins - converted without the luxury of brakes – down hill after hill and pushed them back to the top each time to go again. The band were speeding mere inches away from concrete; no attention was paid to health and safety at this point in the game.

Careering through Brighton’s notorious South Lanes at 6 am, we narrowly managed to avoid shop windows before throwing the ad-hoc vehicles in the back of a van and leaving sharpish to avoid the police. For the video’s final shots, where the wheely bins overturn, our editor played stunt-double. He left the shoot with more than just a few scratches.

I've always worked with a fiercely independent, committed crew to the extent that the same people all go from making music videos to later creating a TV show together (The Porter Report). Working like this keeps things small and consistent and I try to do the same today - I've only really worked with two editors throughout my whole career. At the time of the Wheely Bin races video no one involved had a clue what they were doing: shooting, editing, anything. We were able to do it because no one thought that we couldn’t. It was a total DIY guerilla operation.

SG: After the Goose video I was catapulted into making videos with real budgets. I got to do my Fatboy Slim video, a girl hoola-hooping to Old Pair of Jeans. Midway through the shoot I get a call out of the blue from actress, Juliette Lewis. She had seen the video I made for The Lodge wanted to offer me the music video for her band, Juliette And The Licks. A week later I'm in London shooting it with her and then it premieres at 11pm on Channel 4. That quick.

Soon after this South Central approached me, and the idea for Castle Of Heroes was born. South Central’s attitude was very much 'if you’re making a video for us, you have free rein over it'. We thought about what we liked, and it resulted in a one shot of rock’n’roll hedonism. The budget was spent on pure excess. The video was half-real: obviously we didn’t shoot the stripper at the end but the paramedics are real.

Video No. 3: Shadrack and the Mandem 'Guns And Pork'

SG: This video was a long time in the making and then crazy and difficult to film. Careering around London, again with no permits, making too much noise filming a group of people going a bit mental on the high streets and outside tower blocks. Of course London was not very welcoming of this kind of behaviour. As soon as the video was released it blew up within days, it was huge.

All of this was happening at a time when viral videos were suddenly a desirable thing. The
following are my favourites because they are all high concept but done in a rudimentary way, and mostly enabled by new technology.

I made a video for Jimmy The Fingers on the Nikon DLSR the first day it came out. It was before I realised the limitations of a rolling shutter and was forced to shoot it all as a lock-off shot. The Fatboy Slim Champion Sound video is the first video ever to be shot on a cameraphone.

"Doll & The Kicks... made front page of the Brighton Argus with an interview with the girl whose party was 'wrecked'"

The viral I had most control over was for Doll & The Kicks - You Turn Up ‘A teenage house party goes wrong when the house is gate-crashed and ransacked’ read the video concept and later the headlines. We asked a music blog to release photos from the “party” as if it had really happened. It made front page of the Argus newspaper with a further two page spread inside. There were interviews with the girl whose party was 'wrecked' and everything. It was a provocative marketing experiment, but also a bit of a joke.

This risky era in video-making was killed off with the video for South Central's The Day I Die, and its POV sniper massacre. I wanted to push it, and get a bit closer to the edge. Unfortunately the timing wasn’t right and it was described as Columbine-esque.

The backlash meant I had to put a stop to wild ideas and learn how to shoot “proper” music video, really learn the craft of directing: how to make artists look good on camera; how to make a performance look great; ideas centred around artists and finally, beautiful cinematography.

Leading into videos of singers in fields, singers in Spanish deserts and singers on horses in the snow. They were made for the likes of King Charles' Love Blood, One Night Only's Chemistry, Nerina Pallot's All Bets Are Off and Bonobo's The Keeper.

SG: On A Good Day was made after reading about community gardens in Detroit, where the majority of produce consumed by Detroiters is grown within city limits. I though it would be great to use the budget for a better a cause, and decided I wanted to build a community garden for people in one of the most deprived areas of Detroit.

"I loved the idea of subverting the money for something good: the band gets a video but the money actually helps someone."

The artist was on-board with this idea so I found a plot of land, and before the budget was even finalised, I went online, bought it and handed over the deeds to a local community leader. I loved the idea of subverting the money for something good: the band gets a video but the money actually helps someone. It's an idea I've tried to pursue again a number of times but no one's gone for it.

SG: In nine years of doing this I've made around 250 music videos. It’s an absurd number for anyone, and it doesn't even include the TV shows, documentaries and adverts. I just keep shooting. This montage not only represents my career to date, but also charts all the changes in the industry over that time.

The most important thing for me is making this not feel like a job. I've never had a job, ever. Being a filmmaker rather than simply a director keeps me independent and so it remains a lot more fun than it might otherwise be. I’ve had so many opportunities and experiences - all ridiculous and brilliant. I've worked with Hollywood actors like Juno Temple, Harry Shearer and of course, Juliette Lewis.

"The most important thing for me is making this not feel like a job. I've never had a job, ever."

I’ve been to some places I probably would have never been like the Amazon, India and Las Vegas. I've had the joy of spending millions of pounds of other people’s money on outrageous ideas and beautiful images. I get to build things and blow things up. I get to run wild and do things that would otherwise be impossible, without the excuse of making films.

I really appreciate the close working relationships with artists who have given me the most creative freedom, enabling me to create video campaigns for their entire album. Most recently this has included Chrissie Hynde and the band, Postcards From Jeff. I want to keep shooting, I want to keep things rolling. I just directed a video for The Strypes, set in a traffic jam, a great video for a great band. I've got more videos lined up to make this month for Tiger Cub and Traams.

• Check out even more of Steve's work at the NTSH website