Smashing It – Travis's Fran Healy on his video directing debut 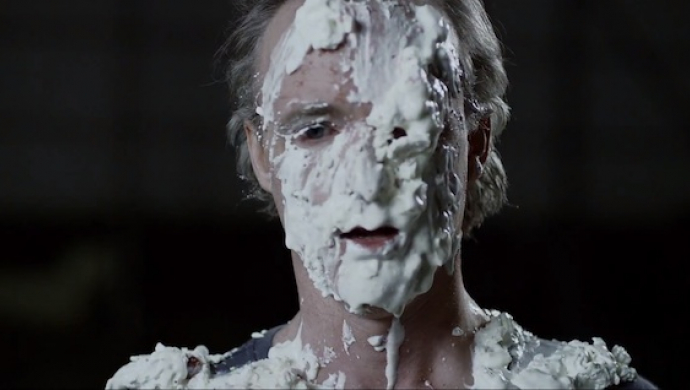 Over the years Fran Healy has been the main front-of-camera talent in numerous videos for his band Travis, and worked with some marvellous directors, including Jamie Thraves, John Hardwick, Anton Corbijn, Dayton & Faris and many more. With a brand new Travis album released this year we've already had the deadpan comedy of the Another Guy directed by Wolfgang Becker.

But Fran has now gone and taken the plunge himself, directing videos for two tracks from the new album - his first for the album's first official single, Where You Stand. Fran is on-camera too - taking quite a lot of sadistic punishment from a nameless female. So we spoke to Fran to talk about the video, and his multi-tasking...

PROMO: Why did you decide to go more 'hands-on' with this music video and direct? Is filmmaking something you've always nurtured, or something developed more recently?

FH: None of the treatments we received felt right. I'd written/art directed the video for our teaser song "Another Guy" which Wolfgang Becker directed and it had turned out nice, so our project manager Emma Greengrass suggested I treat for this too.

Travis have a rather wonderful back-catalogue of music videos. When you've been in a band for a while and you have so much experience to draw from are you more tempted to look at things and think 'You know, I could do that as well'?

Did I think I could direct? Not really but since moving to Berlin, and being around Wolfgang and X-Filme, I learned if you surround the idea with an experienced watertight team - a great producer, great art director, a great DP, and a great first AD and a shit hot editor then things get done no matter who is in the director's chair. The job of a director then becomes more about having a clear vision and delivering that in one piece.

Can you walk us through the concepts and ideas behind the video? Obviously it isn't nice to see you harmed, but you really have made it amusing. Why use yourself as the target, rather than bringing in an actor?

The song is about sticking with someone no matter what – through thick and thin, sickness health, etc. And the video is a visual representation of this. It came from the first line of the song "Bumper car me left of right, I'll take a thousand knocks". I originally had our guitarist Andy in the role as he is way funnier actor than me. But it became clear, as I was the face of the band, it would be better if I did it. Realising my role as a supporting actor and making the role of the female the main one was important.

Although I suppose you're no stranger to being a target in your music videos - I seem to remember you doing the North by Northwest and getting shot at by a spitfire in 'Writing to Reach You', getting pushed off a wall as humpty-dumpty in 'Coming Around' and even getting attacked by death himself in 'Walking in the Sun'. Is there a running theme, or are these unfortunate coincidences?

Yes, there definitely is a running theme. John Hardwick started it. Thanks John.

Director Charlie Sarsfield continues his collaboration with Kojey Radical with the video for Payback, featuring Knucks - and adding a few more famous faces too, at a swish …