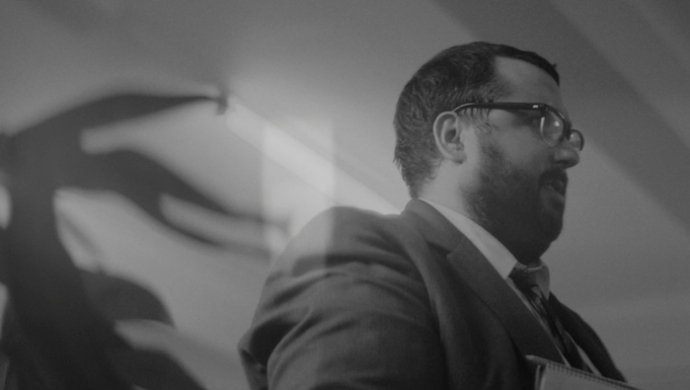 In the past few years Two Door Cinema Club have put themselves in the hands of some of the finest young music video directors around, from Megaforce and Canada, to Sam Pilling, Jul & Mat - and now Brewer.

That is, the brothers Alex and Ben Brewer, who recently directed the TDCC video for Changing Of The Seasons. The young American directors came to London to shoot a period piece, evocatively recreating the sense of the swinging Sixties, with the band cast as a rock and roll band, holding a big press conference which, in keeping with the times, leads to chaotic scenes.

It's the latest of a series of videos where Alex and Ben have shown their considerable talent and versatility. And we spoke to them about the process, and the challenges of making the video...

PROMO: The press conference and the ‘are you surprised…?’ question – was that the starting point for the idea of the video?

Brewer: The initial idea was inspired by footage of various Bob Dylan and Rolling Stones press conferences of the era. You had a real mix in the journalism community - there were some members of the press who got it, some people who liked to think they got it, and other journalists who down right hated it. So we thought it would be fun to cast Two Door Cinema Club in that role as the polarizing rock and roll enigma. We knew we wanted journalists to ask questions that ranged from thinly-disguised bits of hero worship, to blatantly insulting jabs, with the idea that the blatantly insulting question would inspire a full-blown riot among these otherwise proper squares.

The specific question "Are you surprised…"  actually came from Two Door Cinema Club. We had written our own version of the insulting question – which we thought was hilarious – but it got vetoed on set by the powers that be. TDCC saved the day though. We asked them if they'd ever been asked a really passive aggressive or rude question and they came up with the perfect thing.

Are the band trying to make a statement about their success? That it's somehow unlikely (as the journo suggests), or do they feel that they have been unfairly attacked by the press, since having some success?

Not at all. I think in actuality the second part of that question was "...considering how young you all are?" which if you think about it, is really more of a compliment. The goal of the video from the start was to portray Two Door Cinema Club as these classic rock and roll stars, going back to a time when the rock star was this new kind of animal. It's an outdated concept if you think about it because so much insanity has happened since the early days of rock and roll that the idea of people still genuinely being shocked by musicians is hard to fathom. So the intention of the video was more about having fun with a specific era and a specific scene.

It has the look and the joi de vivre of a classic 60s movie – a Fellini, French New Wave, etc. Why is it set in the 60s? Was that always going to be the case?

Yes. We knew the band wanted to do something a little more rock-and-roll and destructive for the video, so we decided to go back to the Golden Age when the genre was new and exciting and just starting to become a catalyst for all of these cultural movements in the 60's. Shooting any period piece is a gift for a director. When you don't have a lot of time to rehearse actors, brilliant costumes and sets and props can help build the reality of the characters for the actors very efficiently.

You have a lot of elements – a big cast, period setting, and telling a story. What were the biggest challenges about making the video, from a production point of view?

Well, you can talk to our producer Sarah Tognazzi about that one! We had such a phenomenal team on this, we can't praise them enough. When we came up with the concept, we wanted to do something that would have a lot of visual interest, that would give the audience a glimpse into another time.

As directors, we always try to plan with the idea in mind: "What if we don't get everything we can dream up?" You try to be realistic and think about what version of the idea you can pull off with the minimal number of elements, so that it still retains the things that make it interesting. However, this production met all our expectations and then some. Sarah got us the perfect location and filled it with enough extras to create three separate convincing mob scenes. Our wardrobe stylist, the incredibly talented Hannah Glossop then outfitted all those actors (with multiple looks depending on the scene) with such exquisite attention to detail. It was astonishing.

Even with the healthy amount of extras we had, we still reused certain people for multiple scenes and each time they were transformed by the hair and make-up department. And our art director Hayley McDonald did an amazing job finding all of these special props and set decoration. She made sure everything was period accurate, right down to the sugar glass bottles that were smashed. Everything you see in that video is the result of a wonderful and supremely hardworking crew.

How long did you have to shoot the video, where did you shoot it, and how controlled was the mayhem we witness in the video? Did you storyboard everything?

We shot the whole thing in one 13 hour day at Greenford Hall in Greenford, London. When you only have a day to film and wrangle several scenes of total chaos, everything has to be well planned and choreographed because you only have so many takes before you have to move on. We didn't storyboard but we did create layouts of every space in Photoshop and then we mapped out all the blocking  and camera moves. We had the names and faces of all the actors memorized to speed up the complicated blocking process.

Even with all that planning, once you put people into a relatively confined space and have them go crazy, the chaos is pretty convincing. But it is controlled. Every action is cued and the timing and coordination is pretty precise because those scenes involve some complex camera moves.  We couldn't get over the level of talent we had on set though. Between our crew and all the actors,  our respect for the London film scene went through the roof.

What can you reveal about your working style as a duo? Do you have individual strengths or do you just share all aspects of your directing duties?

Yes on both counts. We do share all aspects of the directing process but we also have different strengths and styles in regards to the same responsibilities. Creatively we're both very in tune. We never go into a project unless we both understand it creatively and understand how it should be executed. That's very important and as a result we can each offer insights and suggestions during the course of a production that push it in a direction we can both agree on.

Despite all the planning that happens prior to shooting, once you show up on set you are still being thrown curveballs all day. Some things are just unpredictable. Sometimes there are happy accidents too. You might see a shot differently the day of the shoot, or realize that there's something you want to highlight or explore that you didn't anticipate beforehand. In those moments it's helpful to have someone who can look at it and say "yeah let's go for it" because you're both on the same page.