Sam Brown: "It's been a ten year dream to work with Pyro Boy" 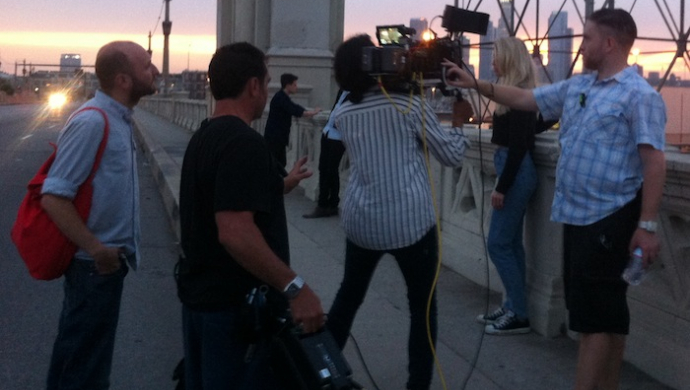 Sam Brown first made his mark as a music video director, with his work for Corinne Bailey Rae, James Blunt, Foo Fighters and many others. Then he became one of the UK's top commercials directors, and his outings in videos have, not surprisingly, been a lot rarer. In fact, his last one was for Adele's Rolling In The Deep nearly three years ago – which is now probably the most viewed British music video on YouTube of all time (at currently around 420 million views).

But now he's back, with a video for a relatively unknown band, London Grammar, and a video that has all the hallmarks of a labour of love. It features a man who literally turns himself into a human firework display, for the benefit of his beloved daughter.

So we talked to Sam Brown to find out what prompted this return to music videos for London Grammar's Strong, and the genesis of his amazing 'firework man' film - and working with 'Pyro Boy' until the fireworks bounced off the camera lens...

Promo News: This is your first video since Adele’s Rolling In The Deep. What lured you back to music videos? How much did you know about London Grammar before you made the video?

Sam: I'd heard of them. The record company had approached me about doing the first video, but we couldn't get the dates to work and they ended up making a very fine one with Bison, which turned out to be one of the best things I've seen in a while, so I was sort of glad it'd worked out that way. Anyway, it piqued my interest for the second single because they looked like an interesting band, interested in interesting things.

Where did the idea of the firework man come from? Did the song provide the inspiration? Presumably this amazing suit already exists?

The idea grew from a line in the song: 'if a child cries what would you not give them?'. The video was intended as a simple allegory for parenthood. I was thinking about the way we do everything for our children, selflessly and without question, with the unspoken understanding that one day they'll do the same for us. So in the story the man looks after the girl, and then right at the very end the girl looks after the man.

The guy in the suit is Pyro Boy, an astonishing eccentric called Wally Glenn. It's been a ten year dream to work with him, but I'd always felt like I wanted to fit him into a story somehow and couldn't think of the right idea.  It's well known that I'm a pyromaniac. Music videos have pretty much been a way of exploring that obsession. I'm always trying to find ways to explode things.

How long did it take to get it together and why did you shoot in LA?

We had a couple of weeks prep, and shot it over three evenings. We shot in LA because I was looking for a location that was vaguely apocalyptic. There are great swathes of LA that look like a scorched and ruined planet. Nowhereland. I'd actually shot close to the viaduct on another project, so it was the first place I thought of which is great because I hate location scouting more than anything. Loads of great movies had been filmed down there. It's a very strange place indeed. Best avoided at night.

Was there an element of danger in shooting the man in the suit? How long was it spurting fireworks – and how many times were you able to shoot it? Presumably your cameraman couldn’t get too close….?

We did a lot of work in adapting his act for the video, compressing what would normally be five minutes worth of fireworks into less than 30 seconds. To the naked eye it was indescribable.

It was only really dangerous for Wally. I think he's been in and out of hospital a few times doing this sort of act. The hairiest thing is when fireworks get trapped between his body and the ground, or one flies down his pants or something.

Autumn [Cheyenne Durald] and her crew were fully suited up. Autumn is such an amazing DP. She's all-action. We started about 30ft away with the camera, but got braver over the seven takes, until the fireworks actually started pinging off the lens. There are a few of these shots in the film. We all got rather blasé

towards the end. I sense Wally sneaked a few more fireworks in there too. One shot clean through my legs... I have a vivid recollection of turning to watch it fizz away along the viaduct.

The video feels like it could be part of a longer narrative – was there a backstory about the father and the daughter that you could expand upon?

I'm glad it seems like there's a backstory because the video is meant to feel like a fragment of a much longer narrative, in which they've probably done this thing together many times. It's a practised ritual. Their secret way of speaking to each other.

Clearly with something like this you’re working within budget limitations that you don’t have to deal with making commercials. In what ways is it a different process for you?

I've learned that there's never enough money or time no matter what the budget is, whether it's thousands or millions. The ambition always outstrips the resources, and the basic problems and challenges are the same all the way up.

In videos there's less structure, less money, less refinement. But there's also less talking, less wastage, and less compromise. You're free to try things out. People put their trust in you. It's depressing how quickly good ideas can evaporate when you have to explain or justify it to others. You can lose confidence in something that was really good, just because somebody else doesn't understand it. What's great about promos is there's no idea development, focus groups or pre-production meetings: either a label get your idea or they don't. Either you do it or you don't do it. It's simple.

What are you working on now – and any more music videos in the pipeline?

I'm shooting two commercials in tandem with each other, one here and one abroad. I would like to do another video before the end of the year, when I've scraped myself off the floor.

And out of interest, what of your music videos to date are you most proud of, and think most fondly about now?

I'm proud of the first James Blunt video I did. Not necessarily for the film itself, but how it opened up my film making and for the first time gave me a voice that felt like my own and not someone else's. It also showed me the value of taking pretty sizeable risks.

It all started a couple of years ago as OMG! Cameras Everywhere!, when experienced camp counsellors-turned- tyro music video directors Daniel Scheinert, Dan Kwan (aka DANIELS) and Isaac …

Rapper's delight in this rap fantasy to real-life promo. Like any boy Rejjie dreamed of balling during the mandatory school trip to the French capital. Unlike every other school kid his …