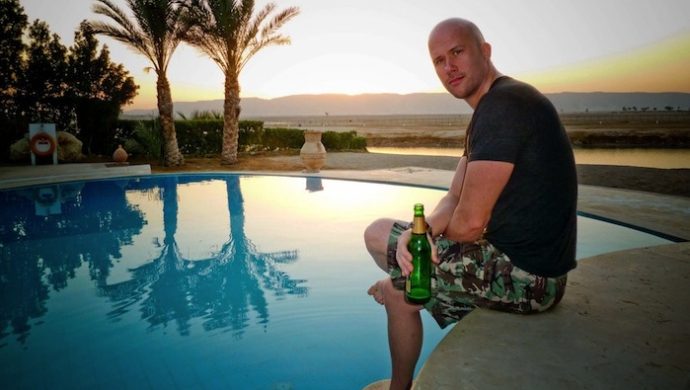 Tony (a youthful 38) is a born and bred Londoner and lives in Shoreditch. And he now has new representation, having just signed to Barnaby Laws's new London operation of Worldwide Production Agency. He's also joined Steve Jacob at WP-A in the US.

Previous occupations: I started out at ELC (the Electric Light Company) as the guy that fixed all the broken lights, before I went to uni. When I got back I started pursuing the path to DoP by joining the team at KIT Cameras, Simion Minett’s old firm. I soon realized driving flight cases to and from set wasn’t the right angle for me! So I went back to the lighting route and became a gaffer for 12 years, working with highbrow DoP’s from around the world. It gave me the lighting experience from multi million pound movies to table top packs.

Favourite music video of the past 12 months? I LOVED the “DJ Snake, Lil Jon - Turn Down for What vid, only in music video world would you be able to go up to your client and say “Right well for this vid I want to shoot a guy f*cking his body through the structure of a building infecting everybody with his f*ck lust”…!!

Favourite video of all time? Wow that’s a tough one..! So many favourites, but it has to be one of the classics. I can't pick, there all amazing for different reasons, but I don’t think anyone could argue at the greatness of the following: Basement Jaxx - Where's Your Head At; Jamiroquai - Virtual Insanity; Aphex Twin - Windowlicker; Fatboy Slim - Weapon of Choice; Madonna – Frozen

Last movie you saw (and was it any good)? Killing Them Softly – beautiful use of some old Panavision glass and sublimely lit by Greig Fraser, who also lit another brilliant piece of cinematography (Snow White and the Huntsman). It’s a little mainstream for some taste and not all that “arty”, but when I left the cinema, my feeling was “Wow - he killed the imagery on that movie..!"

Favourite directors: Love love love working with Ryan Hope, we’ve done some belters together; also Mike Sharpe has great attention to detail and his pre-production is immense; and Nabil, I've shot for him once out in Bucharest, would love to do some vids with him.

Last gig you went to (and was it any good)? I'm off to see Interpol at the Camden Roundhouse, hopefully it will be good. Never listened to there stuff before!

Favourite bands/artists: I love Banksy work, and a big fan of some of the graphic novel artists – in particular Leinil Francis Yu.

Currently reading/favourite book? The Time Machine by H. G. Wells. Read it recently on a trip away, a fascinating perspective on what was then (when written) cutting edge innovation (a box of matches.!)

What was the first music video you worked on - and what were you doing on that job? Many many moons ago, it was a video being shot at Three Mills “A” stage (not around anymore). Dan Landin was DOP I was just bringing some extra lights over from ELC, and was in awe of the jungle of equipment and people.

Favourite job of the past 12 months? The Cheryl “Storm Flower” perfume ad for Rankin – a big three stage affair, with all the toys. And music video-wise, by total contrast, the Kill It Kid – Caroline.

Directed by ioweyouth I shot last summer for NTSH, a very very limited budget job that my whole team pulled in for. We managed car rigs and all sorts. The opening scene in the kitchen, well happy.

What’s the next Big Thing you’re working on? Got a nice Mario Testino shoot in the pipeline.

What would most improve your life? Work-wise, owning Panavisions entire stock of glass..!!

Best moment, or fondest memory, of your career thus far? Every day I step up to camera, doing the job I love.

Worst moment? Has got to be in my old gaffering career. I rigged a T12(light) in the celling of a “actively used” warehouse (lots of cash worth of products sitting in there) and unknown to me there was a sprinkler system hidden right above the lamps position… It emptied the whole 4 tones of water out of the system….. Oops..!!

Miraculously got away with out damaging anything. Well, apart from the T12 and the Green screen that saved the day by shielding the water flow ….

Biggest frustration? Amazing ideas being held back due to clients fears over a “save pair of hands”

What’s the big issue or issues facing music video makers right now? Ever-shrinking music vid budgets, and the obsession of the ridiculously small timeframe. A treatment gets approved on the Monday, and they want to shoot on the Wednesday…. Why..?!

Person you most admire? My dad – he’s a bit of a legend. Being a top end gaffer for many a year, he worked on some biggies. Like Stanley Kubrick’s 2001: A Space Odyssey and Where Eagles Dare – to mention a few!

What advice would you give to someone starting out in music video production? Music video production, I'm not so sure. But to those aspiring DOP’s out there….learn learn learn. It's no good just bugging every DOP on the planet with “can I watch you work/shadow you”. Go down to camera houses learn the kit go down to lighting houses learn the kit, then when you do get your self on-set you will be useful to the people your working for and be arming yourself with the knowledge to move your career forward.. Oh and shoot shoot shoot…. J

Any hot tips on who will be the future stars in music video in the next couple of years – directors or otherwise? Markus Lundqvist, is going to clean up. I’ve had a bunch of his treatments under my nose, all visually striking bold cinematic idea’s cant wait for them to gain the momentum they deserve, and start shooting them.