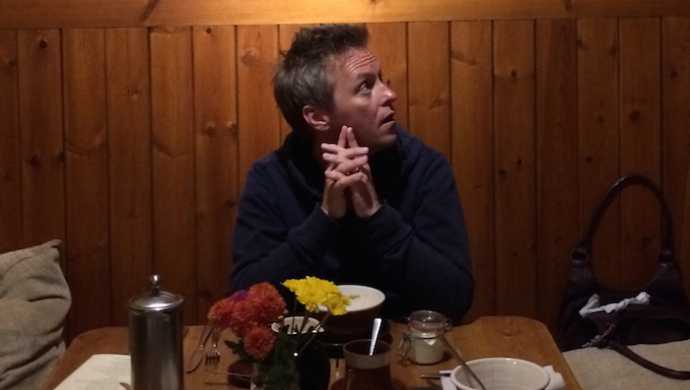 Once upon a time Tom King flirted briefly with stardom in indie-band Land Of Barbara. Then he got into production and in the past 20 years, Tom has made hundreds of music videos and commercials - constantly shifting roles between directing, producing and exec producing. He's also MD of Gas&Electric, and now, with G&E's tenth birthday coming up in June, he's fostering a slew of new directing talent with a new partnership with OB Management. Originally from Perivale, 45 year old Tom now lives in Wivenhoe in Essex with his wife, two kids and a rabbit "that refuses to age".

Education: Watching late night films on BBC2 on a black and white TV; creating VHS mix tapes from episodes of The Tube; staring out of a car window on a long journey whilst listening to the Beatles White Album; Berkshire College Of Art & Design.

Favourite music video of the past 12 months? Joywave's Somebody New by Keith Schofield.

Favourite video of all time? Too many but these have to be amongst the favourites: Foo Fighters' Learn To Fly; Duck Sauce's Big Bad Wolf.

Favourite publications/websites: Not strictly either but whilst shooting in Sweden on an early call time I tuned into the shipping forecast on Radio 4. The perfect oasis of calm in a mad world.

Favourite drink/drug: 16 year old Langavulin, neat and double, preferably sat in a whisky chair next to a proper open fire.

Last movie you saw (and was it any good)? Supermensh. I know its not a feature film, but it's a fantastic lesson in energetic documentary making by Mike Myers.

Last gig you went to (and was it any good)? Sadly too long ago. Bob Dylan at the Albert Hall. An extortionate ticket price but well worth the history (if he never plays there again).

What was the first music video you worked on - and what were you doing on that job? A Ruby Turner video circa 1995. I was a runner, and overslept after a gig with my band and arrived at the shoot very late. A lesson I shall never forget.

Currently reading/favourite book: Hegarty on Advertising. Try and read it every month.

What’s the next Big Thing you’re working on? Setting up a memorable tenth year of Gas & Electric. We're celebrating 10 years of G&E in June.

I set up Gas&Electric in 2005 to create a melting pot of creativity. Diversity across genres and disciplines is key. Over that time have steered a firm course through one recession, shrinking budgets and technology changes, and have moved into directing and producing content and commercials.

What would most improve your life? A camera that floats and small enough that it can go anywhere; good scripts; the William Hill bookmakers below our office to be converted to a fine eating establishment; more time, money, peace and understanding; and the shipping forecast to be piped through tannoys everywhere.

Best moment, or fondest memory, of your career thus far? Trying to direct an actor who was wearing a mask to pretend he didn’t have a mouth whilst trying to eat a sausage.

What’s the big issue or issues facing music video makers right now? Apart from the blindingly obvious fact that labels and agencies undervalue the craft of filmmaking and insist on a Rolls Royce but are only prepared to pay for a Mini, it's… freedom to be creative and not conformist.

Person you most admire? Video directors everywhere for their constant determination to achieve great results whilst fitting square pegs in round holes. Additionally my family for keeping me sane. Professionally, Tommy Cooper and The Two Ronnies.

What advice would you give to someone starting out in music video production? Be patient, be yourself, listen to advice, be strong, expect it to go wrong, be prepared, write a shot list, remember the shot list, change the shot list, sleep well, be bold, eat well, take a deep breath, press record.

Any hot tips on who will be the future stars in music video in the next couple of years – directors or otherwise? The drone director.

Roisin Murphy's directing debut: "The pressure was on"