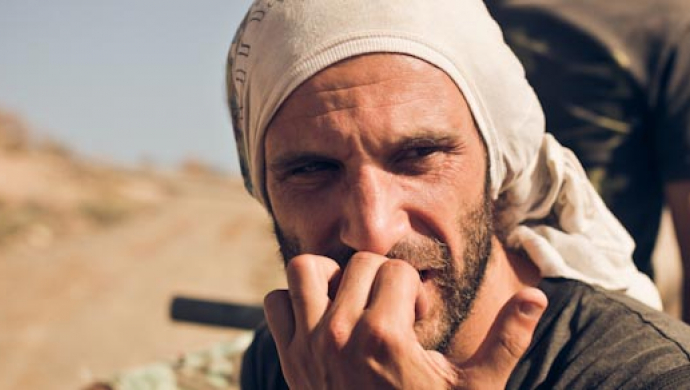 The latest respondent in Promo News's new series of Q&As is one of the most highly regarded and sought-after DoPs in the business. Steve Annis's many credits include Calvin Harris's Bounce, UNKLE's Another Night Out, and Jon Hopkins' Open Eye Signal – for which he won his first Best Cinematography In A Video award at the 2013 UK Music Videos Awards. He lives in London.

Education: The Surrey Institute Of Art And Design. But I failed the degree. There were modules that were supposed to part film degree that had nothing to do with film, so I refused to finish these modules on principle. Stupid arrogant foolish youth. The lack of degree hasn't affected my career

Favourite music video of the past 12 months? Don't Stare At The Sun by George Bellfield. Was an honour to finally work with George on Arthur Beatrice earlier this year. He's a true artist and visionary and not afraid to let me go and do my job – which is to serve him to the best of my abilities

Favourite drink/drug? Xanax, over the counter Melatonin, cider, gin and tonic with ice and lime

Last movie you saw (and was it any good)? Out Of The Furnace. A truly remarkable cast with Woody Harrelson on amazing form as a vicious greedy hillbilly. Christian Bale was, as always, committed 120%. Shot in 35mm anamorphic by the very talented Masanobu Takayanagi who also shot The Grey. I love the fact he's chosen to show us Braddock through the best possible format available, a format that people are supposed to use for widescreen epics.

Last gig you went to (and was it any good)? I forget – so long ago. Maybe TV On The Radio in Shepherds Bush! Or Interpol also at Shepherds Bush. But the best gig ever was Blur at Manchester Uni back in 1993. Only 100 or so people there and Damon sang many songs inside the crowd. A joy. The worst ever gig was Blur at the Glasgow SECC after the Great Escape album sold millions. Full of screaming girls and me feeling utterly bewildered.

Currently reading/favourite book? Mr Mercedes" by Stephen King I'm reading right now. Call me sad but king is one the greatest forgotten authors – forgotten by literary snobs. He's done so many genres, not just horror but pulp, drama, romance, sci-fi, thrillers, political... I can hear many many people laughing at this choice. Fave ever book is "The Corrections" by Jonathan Frantzen, and "Thin Red Line" by James Jones.

What was the first music video you worked on - and what were you doing on that job? As a focus puller it was a video for a Scandinavian singer called Stina Nordenstam. As a DoP it was for Tunng. The song was Jenny Again and the director was Tom Haines. I remember how proud I was when it appeared I'm one of the last print editions of Promo News back in 2007.

What’s the next big thing you’re working on? Recently back from a two week epic job in Montana for Reynald Gresault at Iconoclast. We shot a huge film that encompasses 4 - 5 tracks for a scandanavian band called The Dö. It involved kids, drugs, horses, hookers, lost love, car crashes, indians, graveyards, and lots more.

What would most improve your life? To be able to leave my little girl Finn and girlfriend Tya for overseas jobs without feeling so much pain

Best moment, or fondest memory, of your career thus far? Far too many for just one so another list below in no particular order. Shooting my first NYC job with Ben Newman for DJ fresh; First UKMVA nomination for best cinematography; finally winning Best Cinematography UKMVA 2013; getting repped by Sheldon Prosnit in the USA and getting my work visa and union membership; my first Calvin Harris video for Bounce; working with Florence and Ben Mendelson for "Lover To Lover"; UNKLE "Another Night Out" selected for Camerimage 2012; every hour and every moment of every shoot day and the freedom I was allowed on the Open Eye Signal shoot

Worst moment? Doing a shoot for Bullet For My Valentine with a huge rain machine. I got over-excited and ran under it when the camera wasn't bagged properly. After shooting amazing close ups the camera fizzed and died. My focus puller Ahmet turned it upside down and water ran out the camera. The producer wasn't too pleased as it was only the third or fourth set up. Luckily we had insurance. Sorry Gail

Biggest frustration? I'd say the severe drop in budgets over the past five years. But that said, all the jobs I'm most proud of I've worked for no money and the budgets have been below 15K. This tiny budget means no interference from label or commissioners. So the initial frustration actually turns into joy and escape.

I guess it's frustrating the lack of nerve to use 16mm or 35mm much anymore. But the loss of so many labs and the nature of celluloid means people get naturally afraid. Film is still so ahead of all the rest.

Person you most admire? My many camera trainees who I've worked with over the years who often travels miles and miles to work for free and then drive home for two hours tired after a 16 hour day. I cannot express how much I admire this love and passion and need and desire to work, and gather knowledge and hope to be a success. I spent years and years doing this without fear. I expect the same from all my crew so it fills me pure admiration when I see it.

Also my focus puller Ahmet who had been there for me since day one. He's was a loader when I met him, and many people shunned him a little because he was new school and they were a little afraid. He's now the best focus puller in the UK and never misses a beat.

Your favourite (or most overused) phrase? "We've gotta shoot this on 35mm"

What advice would you give to someone starting out in music video production? Listen to everyone and no one. Surround yourself with people you know and trust who will be honest about your work. I love and adore criticism as it makes me a better DoP. It's vital to see this and be aware of this and step back from the experience of the shoot compared to the finished product.

Be nice and respectful to everyone on set. It's a cliche but the runner making tea could easily turn into a megastar director. I've seen it happen

Any hot tips for future stars in music video, directors or otherwise? George Belfield has only shot three videos so far but they're all amazing.