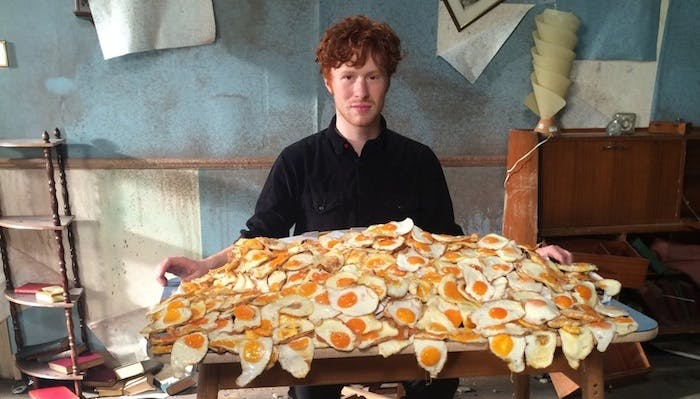 Oscar Hudson started out making skateboarding videos for his friends, before setting off to uni, and since he graduated he's continued to hone his skills as a filmmaker through a diverse range of projects: documentaries, fiction and non-fiction shorts, fashion films – and lately, some excellent music videos.

His latest for Darwin Deez's The Mess She Made is based on a playful idea that sees Darwin matching his face with historic figures found on international banknotes. Before that, he directed two videos for Gilligan Moss, including Choreograph, a meticulously-timed piece which sees family's morning routine repeated endlessly. And now Oscar, who is 25 and lives in Tottenham, north east London, has agreed to complete the Questionnaire.

Education: I have a degree in Anthropology from Sussex University that I got for writing about the Apocalypse & Phantom Limbs.

Favourite music video of the past 12 months?

Favourite video of all time? Gassafelstien, Pursuit by the consistantly brilliant Fleur & Manu, and Chemical Brothers Let Forever Be by Michel Gondry.

Favourite food/restaurant: Thai stuff. I like it spicy as hell and doused in fish sauce & lime juice.

Favourite drink/drug: Those little glass bottles of beer from Lidl.

Last movie you saw (and was it any good)?

Last gig you went to (and was it any good)? Business Lunch. They played a gig in my front room. It was very good. The leader singer snogged a decapitated goat’s head and pulled its tongue off with his teeth.

Currently reading/favourite book: Infinite Jest by David Foster Wallace. I’ve been reading it for the past seven months and it’s staggeringly brilliant but it’s so damn long I’m afraid I’ll never finished it - but I think the book is trying to make me feel that way.

How did you get a start in the business? I first picked up cameras to make skate videos with my friends. Then I bought myself a cheap DSLR and fell into doing bits and bobs for online mags like i-D & Dazed and things slowly started picking up from there. I got a big leg-up into music video biz from Sam & Kim at OB Management - who’ve had my back in a big way ever since.

What was the first music video you worked on - and what were you doing on that job? It was a video for the old Yorkshire rock band Terrorvision. I was "DPing" (read: waving a 5D around) for my good pal Spike Morris. He’s gone on to be a talented DP himself so we’ve swapped roles.

What equipment do you rely on most to do your job?

Favourite job (or jobs) of the past 12 months? My video for Gilligan Moss’s Choreograph (below) was a very satisfying one. It was quite a complicated set-based-trickery concept involving lots of identical twins and lots of precisely timed choreography. I was confident but nonetheless the first time you call action and see
the whole thing actually working it’s such a thrill. The last shot of that video - the big zoom out with the mountain of eggs might also be the best image I’ve ever made.

What was the most challenging job you’ve worked on? The follow-up video we made for Gilligan [for Ceremonial] was a real tough shoot. It was an outdoor night shoot involving building multiple sets in a field and the dragging of a shirtless man behind a truck. I learnt that you really, really don’t want to leave yourselves breaking down nightclub sets in cold dark fields at 5am.

What’s the Next Big Thing you’re working on? I’m working on making films inside people's bodies. It's gonna be microscopically huge.

What would most improve your life?

Best moment, or fondest memory, of your career thus far? I was really pleased to get to make the Darwin Deez video (below) - he’s had such amazing films from some seriously brilliant directors - I feel like a total imposter next to those guys. Also my short film Lord & Lidl screened at the BFI London Film Festival last month - I was pretty proud of that.

Worst moment? Back in the early days we had a petty falling out with the lead performer of a film we had just spent a very full-on ten days driving around Europe shooting. We never had him sign a release form ('cause who needs legal shit, right?) and he was threatening to block us from using his image. He was in every single shot. It was a total nightmare at the time but we got it sorted in the end and the film ain’t bad either.

Person you most admire?

What advice would you give to someone starting out in music video production? If you want to direct music videos - but you’ve never made a music video - then no one is going to ask you to make a music video. So just get started. The sooner the better. Find a band that you like and convince them to let you make them a video. Great ideas don’t have to cost much. Surround yourself with interesting people and look outside of film for inspiration - the best ideas come from strange places.

Any hot tips on who will be the future stars in music video in the next couple of years – directors or otherwise? My Gang. They’re the best. When we started out we were totally faking it- just making it up as we went along. But now everyone is getting seriously, seriously good at what they do and people keep trying to steal them from me. Aaron Z. Willson is a miracle-working producer. Luke Moran Morris is the most enthusiastic and talented art director - a credit to anything he’s involved with. My DP Ruben Woodin-Dechamps has the golden eye. All of ‘em - they’re the best… so hands off! (only joking - obviously give them all tons of work).