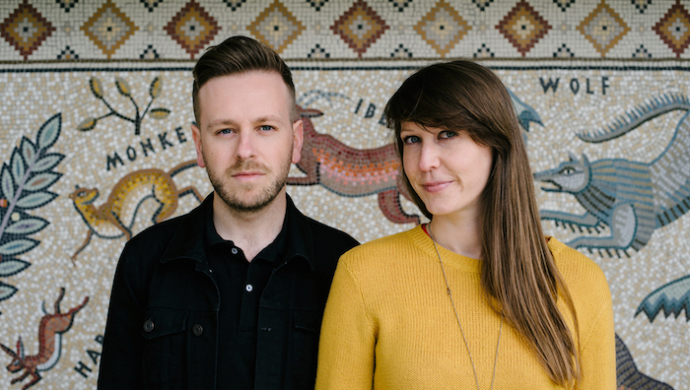 Mathy Tremewan and Fran Broadhurst - aka Mathy & Fran - are a directing duo (and real couple) who's captivating, sophisticated visuals have graced videos for the likes of Anna Calvi, Russ Chimes, Bipolar Sunshine, Kodaline and, recently, East India Youth - their darkest video yet. As his surname suggests, Matty comes from Cornwall, while Fran hails from Cambridge. They now live in Hackney, East London. So we sent them the Questionnaire to find out just how cool they really are...

Education: ​Mathy: Fran and I both studied Film in Southampton, which is where we met.
Fran: Yep - Southampton is where creativity and love blossomed. Though I’m also proud of my City & Guilds in Experimental Mark Making.. very grateful my parents never tried to make me more academic.

Previous occupations: M:  Teaching assistant, record shop employee.
F: Cleaner… I know my way around a floor buffer.  Also worked in a theatre, spent a few years in script development at Working Title and was a Director’s Assistant on a feature.

Favourite music video of the past 12 months? M: Hiro Murai’s Never Catch Me for Flying Lotus is quite something. Biased as I’m a bit obsessed with the record, but HARRYS’ new one for Toro y Moi's Lilly is proving very enjoyable.
F: I loved Warpaint - Disco//Very

Favourite video of all time? Mathy: The Replacements - Bastards of Young. Fran: God Lives Underwater - From Your Mouth, though I could also watch Robyn - Call Your Girlfriend on an endless loop.

Favourite food/restaurant: M: Any food that comes with a bottle of hot sauce.  I also feel like I’ve pretty much existed on houmous and pitta bread my entire adult life - if venturing out for a flatbread fix then maybe Mangal 2 on Stoke Newington Road.
F: Rasa on Church Street... and I've just discovered coconut yoghurt.

Last movie you saw (and was it any good)? M: Montage of Heck – mixed emotions
F: The all too honest answer is Idle Hands - it’s terrible, but came from watching Beyond Clueless, which is infinitely better.

Last gig you went to (and was it any good)? M&F: Sleater Kinney at the Roundhouse. Tremendous.

Currently reading/favourite book: M: I’ve just started reading The Black Eyed Blonde by Benjamin Black. As for a favourite, I’ll go with pictures and choose William Eggleston’s Guide.
F: A Modern Way To Eat - brilliant vegetarian cook book I got for my birthday. I could spend a long time discussing the intricacies of buckwheat.

What was the first music video you worked on - and what were you doing on that job? M: Chopping a cucumber on screen in a video a friend of ours made – I’m not sure it ever got released so my knife skills are sadly not on show to the world.
F: Mine was a self-directed, produced and edited number for my Art GNVQ.  I cast myself as the Lady of Shalott, wore my mum’s old wedding dress and went off to jump in a lot of dirty rivers.  It got a distinction.

"Favourite job of the past 12 months? M&F: Seeing how many people we could fit into a BMW for East India Youth."

What’s the next Big Thing you’re working on? M&F: Writing our first feature. If not big at least relatively long!

What would most improve your life? M: A technocrane. F: A better memory.

Best moment, or fondest memory, of your career thus far? M: Sitting in the boot of a Volvo listening to actress Jessica Raine sing along to Kurt Vile.
F: Working with Anna Calvi.

Biggest frustration? M: The abandoned ships.
F: Too many cooks.

Fran: The big issue is directors keeping ownership of their work, and surviving when more is increasingly being asked for less.

Person you most admire? M: Fran!
F: Mathy is the most brilliant person I know.  And anyone who refuses to have a Plan B.​

What advice would you give to someone starting out in music video production? M: Surround yourself with people you love and admire.
F: Work with people you can learn from.  Don't be afraid of what you don't know. And be kind.

Any hot tips on who will be the future stars in music video in the next couple of years – directors or otherwise? M&F: The awesome production company we’re working with - My Accomplice.

Amitybloc directs a breezy, easygoing promo for Dexter's I Like Me.

Potter Payper and M Huncho join forces in the explosive promo for Catch Up, directed by Darnell Depradine.

Comedian, broadcaster and BUG host Adam Buxton hosts a radio documentary about the British influence on the early days of MTV, to coincide with the 40th anniversary of the launch of the network, …

Potter Payper and M Huncho join forces in the explosive promo for Catch Up, directed …

Amitybloc directs a breezy, easygoing promo for Dexter's I Like Me.

KLVDR directs a palpably luxurious video with a brutal twist, for Skepta's return with Nirvana.