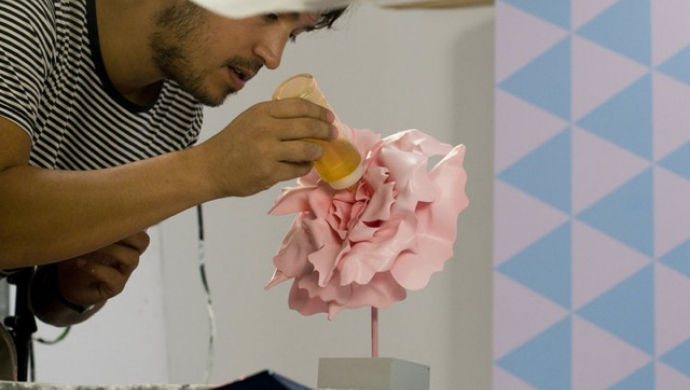 Raised in Exmouth, Mark Connell, 35, has become a leading production designer working across fashion, commercial and music videos, and one of the go-to art directors for high-end pop videos in the industry. Not bad for someone who ran away from home at 17 to join the Navy.

Recently, Mark dazzled us with his second music video collaboration with Dawn Shadforth on Hurts' Lights, following up their work last year on Polyna, Angel. Mark has also worked on numerous videos with Emil Nava for the likes of Ed Sheeran, Jessie J, and Kwabs – and that's just his most recent work in music video. So we thought it was high time get to know the man behind the stellar design work just a bit better...

Education: I went to uni in Falmouth and studied Yacht Design. Falmouth was an amazing place to live and study.

Previous occupations: Well I’ve done a couple of things… I ran away to the Royal Navy and worked as a Sonar Operator on Submarines when I was 17. I then left the Navy as I was spending all my time drawing boats and went and studied boat design. I then started building boats for a while before moving to London to work at an architectural practice.

Favourite music video of the past 12 months? Sam Smith's Lay Me Down is a perfectly executed, simple idea. Ryan Hope is amazing at that, and it has some great camera work by Jake [Scott]. And I also really enjoyed a very heartfelt video by Bouha Kazmi for Jamie Lawson, Wasn’t Expecting That, really just a lovely piece of storytelling. And Dougal Wilson's new Stealing Sheep video is amazing.

Favorite video(s) of all time? Impossible question, there are too many... but Michel Gondry takes it every time for me. He was the first director that made me look at videos as an art form. So let's say Around The World by Daft Punk or Knives Out for Radiohead - I love the art direction in that video. But I could have easily said, Sledgehammer by Peter Gabriel. That blew my mind when I was 13!

Favourite food/restaurant: Cirrik 2, the Turkish Restaurant in Dalston. Turkish is the food of Kings.

Favourite drink/drug: I recently became a Dad so it’s less of the drugs and more like a good bottle of red wine or an Old Fashioned.

Last movie you saw (and was it any good)? The Man From U.N.C.L.E., I loved it. I had no idea what was going on with the story, but it was a feast for the eye, great styling and art direction.

Favourite directors: Very tricky! For me, in the past 10 years, it's been Michel Gondry, Spike Jones and Chris Cunningham.

"Art department-wise Gondry was a game-changer. If you look through his work he uses every theatrical trick in the book."

So much to be learned from just looking at his back catalogue as well as lots to be learned about not sticking to the rules and breaking convention. More recently I've loved the work of Luis Cervero, both his current work, but also his work whilst he was at CANADA. When I first saw the Battles' Ice Cream and the video he did for Justice, New Lands I was blown away. I recently filmed a really fun commercial with Luis, that was really cool.

Last gig you went to (and was it any good)? Man, I’m showing my demise into middle age but it was a jazz gig at The Crypt in Peckham. It was a bunch of London-based jazz artists but I don’t recall names. But yes it was great, I don’t really like gigs so much. I always loved to party, that’s why I loved rave and disco culture, but these days I find I can completely lose myself at a jazz gig.

Currently reading/favorites book: I’m currently working on a shoot in Canada where I’ve been designing a wood cabin/house in a fishing village so I’ve been diving into my art books on Wood Cabin and Scandinavian design.

How did you get a start in the business? One day, my good friend and director Terry Hall said “Hey, can you make me something?” I was like, "sure, no problem". Next thing you know we had shot a fashion film and I was credited as Art Director. At about the same time I also hooked up with another director Alex Turvey and we made a music video in his apartment. I didn’t even know there was a job like [art directing] out there until that point and since then I’ve spent every minute of the last 6 years doing this job."

What was the first music video you worked on - and what were you doing on that job? A music video shoot for Cheatas by Alex Turvey. We built a set in his living room based on the childhood sketches of the lead singer. We projected the sketches onto large white boards and animated them. It honestly was a very pure experience and it’s a feeling I try to recreate every time I shoot.

What equipment do you rely on most to do your job? It would be too boring to say my Mac … so I’ll say my eyes. Without them it’s impossible, and its taken me a long time to learn to trust them.

Favourite job (or jobs) of the past 12 months? A short film I made with Dawn Shadforth for the Saatchi and Saatchi Director’s Showcase, it was like nothing else I’ve made this year. No Art team, just a tiny crew making a short film in a day.

What was the most challenging job you’ve worked on? Really hard to say, I think one of the best things about being an Art Director are the constant challenges, you’re constantly problem solving and I really enjoy that.

What’s the Next Big Thing you’re working on? Well, I’m just prepping a couple of nice videos with Emil Nava. He’s back from LA and it's great to see and work with him. I’m also shooting a commercial in Canada that’s set in a beautiful fishing village so that’s a lovely change from Black Island. Also, I'm shooting a brand film for Mulberry with Alex Turvey.

What would most improve your life? Nothing really, I’m happy with the way things are.

Best moment, or fondest memory, of your career thus far? Lately I’ve been lucky to work with some people I really respect on rewarding projects. But really its impossible to relive that buzz you get when you start out and you’re making fashion films, music videos whatever it might be and you all hit the pub after the shoot and you’re all high as kites from the work you’ve just done.

"I look back at some of those jobs I did with Terry Hall and Alex Turvey and I still really like them and recall every moment of the shoot and how much fun it was getting drunk and talking crap afterwards."

That doesn’t happen so much anymore but I still like a drink after a shoot. It’s a great privilege to love what you do and love the people you work with.

Worst moment? Worst moments work-wise for an Art Director happen after the shoot. Crunching numbers is a big part of the job but not that much fun, until you get good at it and going under or on budget can be a little rewarding.

Biggest frustration? I don’t really have one, but I would say making videos/film should be fun and it’s a team sport. If we all look out for each other rather than stand by and watch people make mistakes then I’m sure the production world would be a better place. Luckily, on the most part, that’s how it is.

What’s the big issue or issues facing music video makers right now? It’s a changing playing field, nothing stays still for long. The hardest part is mostly that a lot of great ideas have already been done. It's likely if you think you’ve come up with a great idea for a video, a good set design or groundbreaking camera move someone has already done it. So I guess what I’m saying is that having originality comes at a premium and the industry should support filmmakers with brave new ideas.

Person you most admire? First and foremost my father, RIP. But in my work life I would say Terry Hall who helped me get into this line of work by taking a gamble on me. Terry was instrumental in helping me realise I could be a good art director and challenged me creatively until I learned to challenge myself.

What advice would you give to someone starting out in music video production? Aiming this at people in the Art Departments: Work hard and be brave. Never say no, there’s always a way, you just need to find it
or make it. Don’t count the days you’re working or look at the clock, it’s very competitive and you need to work really hard. And be brave with your ideas and suggestions.

"Don’t be scared to be creative and suggest things to your art director or director. Try and make work that stands out. To be bold is a lot more fun."

Any hot tips on who will be the future stars in music video in the next couple of years – directors or otherwise? There are a lot of good people coming up – directors and crew. I’ve seen a lot of change even in the last five years. But I would like to say people like my little brothers Matthew and Melvyn Connell. They
just love shooting videos. Matt’s a young director and Melvyn aspires to be a DoP. They have a passion for being behind the camera and you couldn’t stop them shooting if you tried. It's got under their skin and its what they do 24/7. So I wish those guys the best of luck.

Also art directors James Hamilton and Scott Parrish are really great talents at Made Workshop and all the girls at Studio LUNE are an incredible bunch of model makers, stylists and set dressers.

Videos Of The Month: September 2015

Dougal Wilson on Morris dancing with Stealing Sheep: "I was trying to say ‘Isn’t this cool?"

Yes, this really is a music video for rock legends Deep Purple. They're back with a just-released …