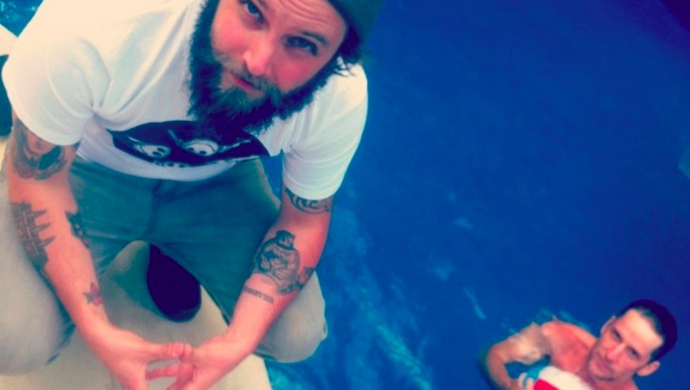 Toronto-based filmmaking team Scott Cudmore (above, left) and Michael Leblanc formed their production company Leblanc + Cudmore in 2008, and have carved out a prolific career for themselves ever since. Michael is the DoP and producer while Scott writes and directs, but in the past year or so they have also been collaborating on directing, resulting in a stream of impressive, eye-catching music videos for Belle and Sebastian, Fucked Up, Spoon, Alt-J, Timber Timbre, New Pornographers, METZ, and Travie McCoy.

Furthermore, Michael recently wrapped his sixth feature in Italy for Tony Romano and Corin Sworn, and has shot other features such as Canada’s first Yiddish feature film The Pin, and No Stranger Than Love with director Nicholas Wernham. Recently the pair also entered the world of commercials, working with clients such as Cadbury, Visa, Mitsubishi, and the Ontario Lottery and Gaming Commission -and receiving multiple Bessie Awards for their campaign for AMI as well as twice nominated for the Prism Prize.

Leblanc+Cudmore have also been the recipients of the prestigious Arthur Lipsett Award for Innovation and Unique Approach to Music Video. And these marvellous Canadian filmmakers still found a moment to complete a tough little examination known as the Promo News Questionnaire...

Previous occupations: ML: I was a 2nd camera assistant with IA 667 in Toronto.  Before that I worked as an on set dresser for mostly MOW’s in Halifax and previous to those jobs I was an actor and musician. I’m still a musician.
SC: I helped manage a couple of video stores for a while, as well I did DVD subtitling - basically creating the subtitle sets for Hollywood films and TV shows like Gilmore Girls and things like that. Did that for a couple years while I was starting out trying to make videos and things.

Favourite music video of the past 12 months?

ML: I would have to say Ian Pons Jewell’s Señorita video for Vince Staples. The ending really took me by surprise and made me think.

SC: It’s tough to pick because there are always so many great ones but probably Daniel Wolfe’s Iron Sky video for Paolo Nutini. Was that more than 12 months ago? Recently Colin Tilley’s video for Alright by Kendrick Lamar really blew me away. Ian Pons Jewell’s Señorita video for Vince Staples is an amazing piece of work.

Favourite video of all time? ML: Michel Gondry’s videos for Around The World by Daft Punk and Let Forever Be by The Chemical Brothers woke me up regarding music videos and I still feel they’re some of the best videos ever made.
SC: I really don’t know if I have a favourite of all time. I know that the ones that really inspired me in the beginning were the ones by Jonathan Glazer - Karma Police, Rabbit in Your Headlights… The Lost Cause video by Garth Jennings was another one that left a big impression on me early on. The first one with the balloons.

​Favourite publications/websites: SC: IMVDB.com is an amazing resource for music video [Never heard of it - ed]. I probably don’t follow blogs as heavily as I should because I know there are so many amazing ones but I’m trying not to be on the internet as much. It’s draining.

Favourite food/restaurant: ML: Mmmm… I’d probably have to say it’s a tie between Japanese and Italian.  My favorite restaurant is just down my street and it’s called The Federal. I eat there all the time!
SC: Indian food. And there’s a restaurant in Toronto called The Atlantic that is probably my favourite restaurant, run by a chef named Nathan Isberg who is incredibly innovative, always interesting, amazing guy. Song by Night + Market in Silverlake is another favourite.

Last movie you saw (and was it any good)? ML: I saw Mad Max. I didn’t like it very much but it certainly was entertaining with lots of action.
SC: Last movie I saw was The Kingsman, and yeah, it was good. A lot of fun. I’m not usually into action movies actually, but I liked this one, it was clever.

Last gig you went to (and was it any good)? L: I saw my friend Brian Borcherdt’s band Dusted and they were great!
C: I saw Spoon in Toronto recently, it was amazing…such an amazing live band.

Favourite bands/artists: ML: That’s really hard to say.  Recently I’ve been listening to a lot of Neil Young, Holy Fuck, Timber Timbre, Bruce Springsteen’s Nebraska, Joy Divison, Canned Heat, Jean Michel Jarre, Brian Eno, Leonard Cohen and the list goes on. The bands that influenced me when I was in my 20’s are Sebadoh, Guided by Voices, Belle and Sebastian, Fugazi, The Misfits (Legacy of Brutality), The Pixies, Stoned Roses, The Who, The Kinks, CAN, T-Rex and many more!

SC: Oh man, there are so many. Right now I’ve been listening to Tame Impala, Caribou, Jamie xx, Jennifer Castle, Mount Eerie, Timber Timbre, Phosphorescent, The Soupcans, Pusha T, Real Estate, Run The Jewels, METZ, Snowblink, Viet Cong…that’s just the stuff that I’ve been listening to a lot lately. I honestly can’t pick favourite artists of all time because I love all styles of music and come to things in need of certain sounds or moods. But I’ll throw the names Leonard Cohen and Neil Young and Sonic Youth out there for good measure.

Currently reading/favourite book? ML: I’m reading The Elegant Universe by Brian Grenne and The Power Of Now by Eckhart Tolle.
SC: I just finished reading 2666 by Roberto Bolaño recently, and it blew me away. It’s definitely one of the best books I’ve read recently. It was actually really inspiring from a cinematic point of view, the way he describes minuscule events, like somebody getting out of a car, or a sound…kind of elevates those small things into the sublime. Currently I’m just reading some short stories by H.P. Lovecraft.

What was the first music video you worked on - and what were you doing on that job? ML: I worked as an actor on a Rankin Family video.  They’re a band from Nova Scotia. I was pretending to play the guitar parts. The second video I work on was called It Could be Love by Camouflage Nights. I directed that with my friend Ian McGettigan.
SC: A long time ago I took a bunch of Super 8mm footage that I’d shot for fun and cut it together into a music video for Martin Tielli, who is a Canadian music legend as far as I’m concerned…he used to play in a band called The Rheostatics. I wouldn’t show it anybody now, but it was how I started.

Favourite job of the past 12 months? ML: My three favorite jobs are easily The Timber Timbre and Spoon videos we just finished. I loved how they turned out and we had a really nice time working on them.  I also just got back from shooting a feature in Italy with my friend Tony Romano.  That was also lots of fun.  Meeting Tony’s family and visiting Calabria was something I’ll never forget.
SC: I loved working with Spoon. That video meant a lot to me from a creative stand point. Also our video for Grand Canyon by Timber Timbre, that also meant a lot to me personally.

What’s the next Big Thing you’re working on? L: Still waiting to hear. :)
C: I don’t know yet!

What would most improve your life? L: Seeing my family a lot more.
C: Moving to the country.

Best moment, or fondest memory, of your career thus far?​ L: I remember feeling really happy when I found out we were going to shoot the Belle and Sebastian video.  They used to be my favourite band and really opened my eyes to a different kind of catchy inspirational melody. I toured Europe in 1996 with their tapes in my Walkman.  Doing a video for them was pretty special.
C: It was an honour being given the Arthur Lipsett Award by the Prism Prize - that meant a lot.

Worst moment? L: Scott and I have not had any worst moments.  Things have been pretty smooth.  But before I knew Scott, I flashed a magazine on a big TV show here in Toronto when I was a 2nd AC.  It was the worst moment of my career and I immediately retired when I finished that day.
C: I think we’ve been pretty lucky and haven’t had too many of what you could call a ‘worst moment’.

Biggest frustration? ML: I think I get frustrated when people say they’re going to do something and they don’t.

SC: We’ve been pretty lucky. It can be frustrating when you love a treatment and excited about the project and it gets rejected or doesn’t happen for whatever reason, but you have to just take those things in your stride because they’re bound to happen.

I can’t count too many horribly frustrating things happening, but I’m generally a pretty laid-back guy and I don’t get frustrated that easily actually. Maybe there are things that I should be more frustrated about and I’m just not.

What’s the big issue or issues facing music video makers right now? ML: I think it’s budgets. But the community of filmmakers in Toronto are great and everyone always tries their best to make the money work so I can’t complain.
SC: Budgets are tough these days. They just are, but that’s the way that it is. You have to try to find ways around that and still achieve the vision… that is probably the biggest challenge.

Person you most admire? ML: These days I’ve been admiring young parents.

What advice would you give to someone starting out in music video production? ML: I would say be kind and respectful to others and listen as much as you can.  Take advice from the people around you and allow the film making experience to be as collaborative as you can.

SC: Just keep going, keep making stuff, even if you have to shoot it on a hi8 HandiCam in your backyard - just keep going.

Obviously you probably don’t have to shoot on something like that these days as it’s getting easier and easier to access gear affordably, but generally, yeah, just make things as often as possible and don’t be afraid of it maybe not being the best thing ever. You’ll just get better and gradually start to figure out what your style is.