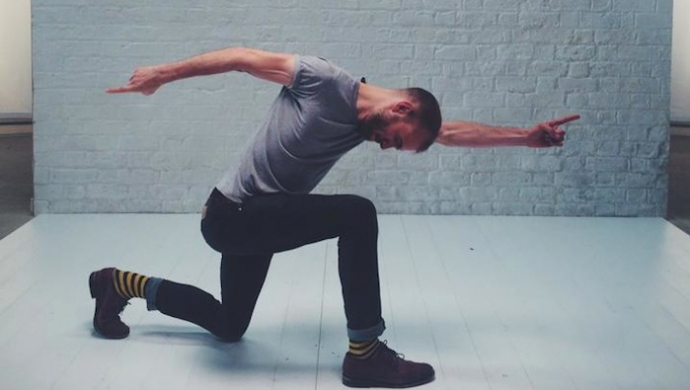 Joe Connor's background in theatre, film projection and (ahem) mime, has been put to good use in his chosen career - he's become one of the UK's most exciting and prolific music video directors.

In the past year Joe's directed videos for Paul Weller, The Courteeners, Blitz Kids and Don Broco, among others. He's now working on a new project with Weller, and just completed a new Courteeners video and ads for legendary designer Paul Smith. We managed to pin down the self-confessed hyperactive 28 year old - originally from Warrington, now living in North-East London – long enough for him to answer our traditional set of questions...

Education: I trained as a theatre director at the Central School of Speech & Drama in London, which is where I got really interested in clowning and mime. I started a theatre company called Parrot {in the} Tank at Central with a few mates. We ended up doing really well, toured all over Europe, had shows at the Roundhouse, the ICA and even managed a sneaky West End run at the Arts Theatre. Didn’t do too badly for a bunch of 20 year old (mostly drunk) mates. All our shows have no words, they’re super-visual. So in the end, moving over to music videos was so natural.

Previous occupations: Various bar jobs, three terrible months at H&M. The best was three years as a 35mm Projectionist at the Everyman/Screen on The Green – getting paid to watch films, splice them together, learn the craft was the best job in the universe.

Favourite music video of the past 12 months? Too many faves – Turn Down For What is complete genius, Iron Sky blew my damn brains out, as did Chandelier and Hiro’s Flying Lotus vid. But I got to say I have a real soft spot for Rob Brandon's Solo Dancing video [for Indiana] because I heard the in-joke before he’d shot the video, so it makes me smile every time I watch it.

Favourite video of all time? I have panic attacks at my own inadequacy every time I watch Gondry’s Let Forever Be video. Same with Wax California by Mr Jonze.  Both those vids are at the extremes found in music videos – the insanely intricate and complex and the insanely simple and clean.

Favourite food/restaurant: I’m a human dustbin so anything goes in. Fave restaurant is probably Yum Yum in Stoke Newington, on my doorstep. Great Thai.

"I feel really privileged to be working at the same time as so many talented people and experience, in terms of creativity, this 'second coming' of the music video format."

Last movie you saw (and was it any good)? I’m an ex projectionist so I’m a cinema freak. I go as often as I can, so the last film was genuinely Padddington, which is super un-cool for a 28 year old with no kids to say, but fuck it. It had interesting reviews and I thought it was a brave film made by a good filmmaker.

Favourite directors: The holy trinity of The Coens, Paul Thomas Anderson and Chaplin. Add to that Spike Jonze, Gondry, Scorsese, Kubrick, Buster Keaton, Lynch, Gilliam and Orson Welles and you’ve roughly got my taste down.

Last gig you went to (and was it any good)? Probably Francobollo – and yes - they’re crazy good. It’s a band full of mates and their gigs are always anarchic, raucous evenings of ridiculousness.

Currently reading/favourite book: Currently reading Big Sur by Kerouac. FavE book will always be The Rum Diaries by Hunter S Thompson – you can feel the heat off the pages. Me and a few mates all read it at the same time when we were like 19 and it just resonated. The Grapes of Wrath is probably one of the most important books, it changed me.

What was the first music video you worked on - and what were you doing on that job? Can’t remember the actual first one I did. I remember the first kind of proper one was for my mates The Moons – where I hand cut out like 3000 pieces of paper and shot it on my kitchen work top on my girlfriend's birthday. It took like four of us a solid week to make for literally no money – like 0 pennies. I still love it. Technically it could have been so so so so much better but it was a bunch of mates making a video for mates which makes it special.

Promos have been key for me, a really important way for me to tell stories and try techniques out and grow as a storyteller. They're so playful which is what I love. It's very similar to the process I have in the theatre, which is to take a nugget idea and explore it, find a way of expressing it and getting it out. I feel really privileged to be working at the same time as so many talented people and experience, in terms of creativity, this 'second coming' of the music video format.

Favourite job of the past 12 months: Paul Weller. He’d seen my work and agreed to do the video with The Moons, and after that he got in touch with me which was crazy flattering and we made a really interesting video together in a 30 foot kaleidoscope

What’s the next Big Thing you’re working on? Staying alive – my life’s mission.

What would most improve your life? A garden

Best moment, or fondest memory, of your career thus far? My work for Band Of Skulls – it’s still the benchmark for me. I’ve grown so much since making those videos but, fuck, they were fun to make. And people really resonated with the first one – it got me signed as a features director to Independent.

Worst moment? Toooooo many to count and too embarrassing to recount

Biggest frustration? I’m hyperactive – sometimes I get excited and lunge in front of the wrong people which makes me frustrated because you only have one first impression and I end up kicking myself because I’ve been lunging all over the gaff around super-important people. Having said that I’m a world-class lunger and I have a constant Indie Knee (that’s a medical term for anyone who frequented the Metro in Tottenham Court Road)

What’s the big issue or issues facing music video makers right now? More so than budget I think it’s time – everything’s treatments asap, shoot tomorrow, delivery asap. I totally get why it is like that, but it would be great to just have an extra week on everything as I think sometimes the crazy deadlines just cut your time to mull on stuff and squeeze the best juice out. How cool would it be to mull over an edit or a shot list for an extra week and make sure it’s perfect.

Person you most admire? My mum without a doubt. She’s a nurse, specializes in psychiatric care and dementia. Everything she does, everything she touches her focus is on being there to serve and support. If she’s never met you she’d treat you like you’re the most important person in the room and her humble approach and humility floor me – words can't describe. Life’s all about looking after each other no matter what state we find each other in.

What advice would you give to someone starting out in music video production? Go and do it. Don’t think about it, just find a story, find some music and make something happen.  My dad always said you have to nail your flag to a post at some point – it means don’t worry about how it turns out or what people will think of what you make. It’s a journey and you only get anywhere by taking steps so just do it already.

Also – find people whose work you like and take them for a coffee, chat to them and meet people. Most people in this business will go anywhere for a cup of coffee, so go find out first-hand how people made the work you like.

Any hot tips on who will be the future stars in music video in the next couple of years – directors or otherwise? I’m biased but my fellow Chief-ians Sing J Lee and Nate Camponi all kick out really crazy good work. Also my best buddy Sam Bailey has sort of gone back to clowning and running our theatre company – if he ever decides to come back to music videos he’d be the best in the world at it – that man is an untapped wealth of complete genius.

Ethan + Tom capture the surrealism of suburbia, in their dreamlike coming of age …

Femi Ladi directs a thought-provoking promo for Guvna B and D Double E.

Lorde returns with a new sunny and carefree attitude with Solar Power, epitomised by the beach-set …