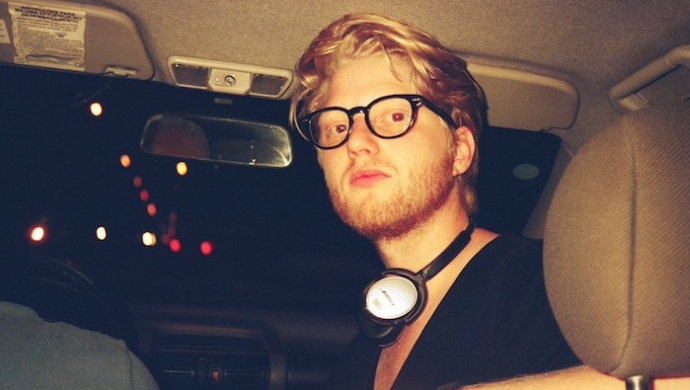 Over the past couple of years, 25 year old Jake Scott has steadfastly refused to allow the fact he shares his name with a well-known director to distract from him becoming one of the most sought-after young DoPs in British music videos.

Jake's worked with directors such as Mathy & Fran, The Sacred Egg, BRTHR, Emil Nava and Andre Chocron - and his exceptional work on Chocron's video for London Grammar's Nightcall earned him a Best Cinematography nomination at the UK Music Video Awards 2014 last November. So we thought it was about time we asked Jake - who's from Hastings and now lives in Homerton in London - to tell us some more about himself...

Education: Traditional education and I didn't really get on, we went our separate ways as soon as possible.

Previous occupations: When I was 15 I ran a sound system with a bunch of friends, putting on club nights and vjing - turns out being the promoter was an excellent way of getting you and your under age friends into nightclubs. When I first moved to London I got a job at The London Film School as a sort of technician and rushes runner, spent most of my time trying to eaves drop on the seminars.

Favourite music video of the past 12 months? Well Saam totally smashed it with his Viktoria Modesta hyper pop vid. Paul Gore's Paloma Faith tryptic was a real beaut too!

Favourite food/restaurant: Chambers in Lauriston Village - the only place you can get a Turkish-English breakfast.

Last movie you saw (and was it any good)? 'l'apollonide' by Bertrand Botello. I dig Josée Deshaies' lighting, thanks to Ramon Ayala for recommending me this. Also just caught Inherent Vice, which is an awesome movie with super strong photography.

Favourite directors: There are so many, but if I have to name names, Sophie Muller and Dawn Shadforth of course, Marie Schuller, Alex Turvey, That Go, Andre Chocron, Ryan Hope, Francois Rousselet, Sam Brown... I could go on!

Last gig you went to (and was it any good)? John Maus somewhere south of the river, years ago. He was like really really tall.

Favourite bands/artists: The DØ's new album is crammed full of great singles. Keep an eye on Kelala when her first album drops this year too.

"Best moment? The tingles every time I get rushes back from the lab. Don't think that'll ever change."

Currently reading/favourite book: Favourite book would be 'Of Human Bondage' by Somerset Maugham. Someone should option a modern day adaptation of that actually.

What was the first music video you worked on - and what were you doing on that job? I'm not entirely sure, but one of my first assisting jobs went on until 5am. I didn't know about overtime or anything and thought it was amazing how committed the crew were. Everyone just works until the jobs done, right?

Favourite job of the past 12 months? Shooting the Lapsley video with Noel Paul recently was a real pleasure, an exercise in minimalism. Also working with Marina and the Diamonds was great, ever since Kinga Burza's 'Hollywood' video I've thought she was an amazing performer, and she more than lived up to it.

What’s the next Big Thing you’re working on? I have something pretty special cooking with the talented Ryan Hope, look out for his new Sam Smith video.

What would most improve your life? A tiger!

Best moment, or fondest memory, of your career thus far? The tingles every time I get rushes back from the lab. Don't think that'll ever change.

Worst moment? Being at the bottom of a muddy hole, in a field, in torrential rain, when the AC informs me, that finally there is literally nothing dry left with which to clean the lens anymore, so it's a wrap.

Biggest frustration? How conservative the music industry often turns out to be - this never fails to surprise and disappoint me.

Person you most admire? Ahmet, my first AC, for being a total rock. All directors, it takes a lot to put yourself out there and stand by your idea.

What advice would you give to someone starting out in music video production? Most people genuinely want to help you out, you just have to make it really clear what it is you want and how passionate you are about it and you'll have a half descent chance of springing to their mind when an opportunity does arise - then work of your arse off because if you don't there's a whole queue behind you that will. Oh and for gods sake get a driving license

Any hot tips on who will be the future stars in music video in the next couple of years – directors or otherwise? Naor Aloni is one to watch for sure. Noel Paul & That Go have been doing some really creative work, we'll be seeing more of them I'm sure. Keep an eye on the runners!