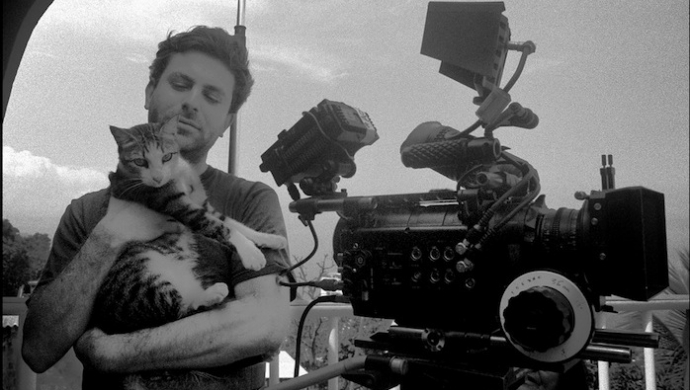 Ian Pons Jewell has been one of the most distinctive directors working in British music videos over the past few years. He won an MVA award for one of his first videos for Jargon VA ft Tinie Tempah, also directing clips for Crystal Fighters, DJ Shadow and others before moving to Bolivia, where he directed the video for Naughty Boy's La La La (ft Sam Smith), one of the most viewed videos on YouTube ever. He's had a very busy 2014, working in the US, South America and the UK on videos for Odesza, Cold Specks, Pearls Negras and Naughty Boy again - culminating in his recent video for Paolo Nutini's One Day featuring Joanna Lumley. Born in Menorca, Spain, before growing in England in various parts of the country, Ian's now back in London - for now...

Favourite video of all time? Torn between two. Gessafelstein – Pursuit, which knocked me for six when I watched it. For me, it captures the indifference of the universe that we've been thrown into. Then Rubber Johnny by Chris Cunningham. Even though it's classed as a short film, it's  the most intricately designed music videos I've ever seen. Mind boggling.

Last movie you saw (and was it any good)? A Hard Day. South Korean film that I saw on the plane. Really enjoyed it but the end dragged out a bit. The highlight was him putting C4 in a dead guy's behind to blow up his enemy!

Last gig you went to (and was it any good)? Some sort of noise night at Cafe Oto, one of the worst gigs I've even been to. They twiddled with some homemade electronics to create this constantly repeating noise. The crowd had their fingers in their ears, pretending to rest their heads on their hands. Worst 5 quid I ever spent.

Favourite bands/artists: Damn that's a tough one. This year I'd say James Blake.

Currently reading/favourite book: “Borracha estaba, pero me acuerdo.” (I was drunk, but I remember) by Victor Hugo Viscarra. He's like the Lebowski of Bolivia. My favourite book is probably Cat's Cradle by Kurt Vonnegut.

"Scripts not happening is usually the biggest frustration... a whole little world of characters and story you've lived in for a little while suddenly dies!"

What was the first music video you worked on - and what were you doing on that job? The first music video I ever worked on is the one I directed for Otto Von Schirach – Aliens Visiting Me. We made it for about £70. The protagonist, Christopher Prior, has been in a lot of my work since, including my last for Paolo Nutini. He's the gentleman dribbling gold liquid.

Favourite job of the past 12 months? That's a hard one. At a push I'd say Naughty Boy – Home. It was my first proper shoot in the USA, I felt like a little kid going to Disneyland.

What’s the next Big Thing you’re working on? A music video for a track from Disney's “Frozen”!

What would most improve your life? An all-in-one programme to be able to work with a script and shotlist on top of the music's timebase, for when I'm structuring the video in pre-production. Maybe it exists?

Best moment, or fondest memory, of your career thus far? Directing Joanna Lumley would be the biggest career highlight for sure. But my fondest memory is meeting the genius that is Gaia Borretti who has edited all my work to date. I needed to learn Avid for a job in London, but had no money at all to pay for lessons, so I checked out the skillswap section of Gumtree. I searched “Avid” and it came up with a posting that said “I teach you Avid, you teach me English”. I wrote to her and we met for a coffee, we thought it would be a great exchange and at the end of our coffee she gave me a DVD of her work as she'd just moved to London. I got home and put the DVD on and my jaw dropped. I watched this beautiful film she had made with found footage and sound, it was stunning. I immediately asked her if she would be up for editing my first ever music video for Otto Von Schirach, which we made in 2009. She said 'yes', and we've worked together closely since. Thank you universe. Anyone out there needing an editor, I cannot recommend her highly enough.

Worst moment? Having a video canned, but rightly so as it just wasn't up to scratch. I was really lucky in that everyone was so lovely about it, and I got to take away invaluable lessons.

Biggest frustration? Having one of the best scripts I've written as the favourite, for a track I was head over heels for, but it then not happen due to changes in the release schedule. Depressing. It's one thing when they go for another script, but it hurts when it's just bureaucratic. No one's fault, just one of those things in music video world. Scripts not happening is usually the biggest frustration, but it's more of a sadness, because a whole little world of characters and story you've lived in for a little while suddenly dies.

What’s the big issue or issues facing music video makers right now? Budgets, as always! There's lots of smaller issues that would make life easier though. Sometimes I feel there could be more time for production than is given, sometimes it feels like videos are rushed for a delivery date, which is then moved back at the end. More transparency with the amount of people pitching, some times you realise every director you know has received the same track as you, making you wonder just how many people you don't know are working (for free) for days on a pitch they won't get much focussed attention on. The issue of sometimes not being allowed to upload your work to Vimeo is absurd and needs to be sorted out. We make music videos for the art of it, but also it's the way we can properly paid work through other projects, it serves as a portfolio.

Person you most admire? It would have to be my mum and dad! I know a lot of people who go into creative work can get a lot of stick from their parents at the start. Some I know never did the course or job they wanted to due to pressure from their parents. Mine have been supportive throughout.

What advice would you give to someone starting out in music video production? Keep busy, always have a project on the go. Seek honest criticism and listen to it. Keep an eye out for likeminded people and build a team. Your comfort zone expands on every new project you do, so go outside of it, even if it's just slightly, every time.

Any hot tips on who will be the future stars in music video in the next couple of years – directors or otherwise? In terms of directors making amazing work and yet to be signed I would say Alan Masferrer. His work has so much heart it in, something I love in music videos. I'm really excited to see what he'll be doing in 2015. The videos he's done to date are so different in style, but have his voice throughout them, LOVE his work. Then there's Allie Avital Tsypin of BANGS who I had the pleasure of getting to know recently . A true Surrealist amongst the Tumblr-Surrealists. She's amazing. Such tight videos, beautifully strange.

Abbie Stephens, whose video for George The Poet is one of my favourite videos of this year, and again, so much heart to it.  Her videos are so tightly made. Then there is Valentina Avayu, a good friend of mine who lives in LA. She's made a handful of videos with pea-sized budgets and they're STUNNING. Check her video for Jez Dior – Clean Me Up.

Filip Zaluska directs a stirring exploration of desire, love and betrayal in his exceptional …