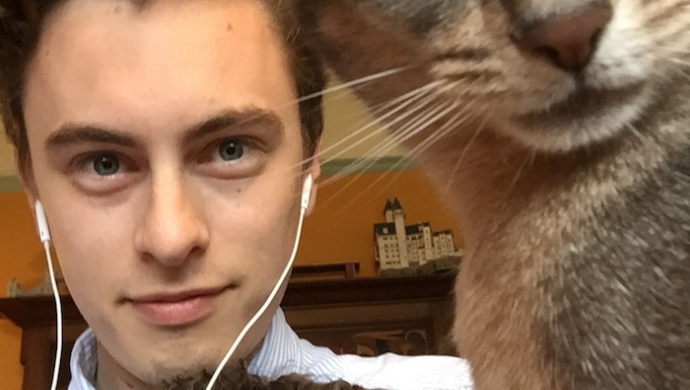 Fred Rowson (that's him on the left) is 26 and has been directing music videos for about four years. After his videos for Police Dog Hogan, Friendly Fires, Marshall F and Dubbs v Borgeious he officially signed to Colonel Blimp in 2014. Since then he's teamed up with pop-dance sensations Years & Years, shooting the videos for Foundation and Shine - the latter for a live interactive broadcast in a Channel 4 ad break.

Previous occupations: Film critic for an atheist website and magazine; Event producer at BAFTA. I once ran a film competition for amateur filmmakers to shoot 3 minute movies about London edge-lands. One film was titled ‘Wolf Woman of the North Circular’.

Favourite music video of the past 12 months? It’s a tie between: Les Sins, Bother by Picture Pictures, and/or Cage the Elephant, Cigarette Daydreams by Mark Pellington.

Favourite publications/websites: The New Yorker, Gawker. Anywhere that I can read either long, salacious profiles and gossip. I used to read Deadline a lot.

Favourite drink/drug: I love a martini. Or a gimlet.

Last movie you saw (and was it any good)? In the cinema, Mistress America. So good. Noah Baumbach and Greta Gerwig are making really great, incisive movies right now, all about characters who you’ll probably recognise. On DVD: To Have And Have Not. Pure pleasure.

Favourite directors: Paul Thomas Anderson. I love listening to him speak. His whole approach is the right approach, I think. Howard Hawks. David O. Russell. David Fincher. I’m going to say movies here, too, because there are some one-offs that I love, rather than necessarily the
directors: Chinatown, Grizzly Man, Fred Astaire & Ginger Rogers, all the Jackass movies.

Biggest frustration? Anyone who can’t make their mind up. Decisions are good.

Last gig you went to (and was it any good)? I saw Years & Years and Kanye West at Glastonbury.

Currently reading/favourite book: I have a bad habit of reading more than one book at once. Right now it’s Spillover: Animal Infections and The Next Human Pandemic by David Quammen, which is about how diseases like SARS and Ebola infect humans from animals. Alongside that is Perfidia, the
latest James Ellroy novel (reading James Ellroy is such a filthy experience). Favourite is hard: Moby Dick, The Long Goodbye, Hangover Square. Jurassic Park.

What was the first music video you worked on - and what were you doing on that job? Directing Police Dog Hogan’s Shitty White Wine. I’d only directed a short film before this and years before. I pitched the idea to James Studholme at Blink, who is also the lead singer in the band. I so badly wanted the gig that I told him I could probably do the whole thing for about four hundred quid. He looked at me for a moment then said he’d give me a bit more than that.

"We spent most of the budget on renting a horse."

Favourite job of the past 12 months: Has to be my video for Years & Years’ Foundation. Definitely my favourite song I’ve shot a video for, and a real labour of love from every one who worked on it. I hope that watching the video gives you a really visceral reaction. It freaked the fans out, so I was very
happy about that. I especially enjoyed the YouTube comments: “this scared the living shit out of me” and “kick me in the fucking face” were highlights.

What’s the next Big Thing you’re working on? I’m about to shoot a short film about a woman with a haunted oven.

What would most improve your life? South London. The more time I can spend there, the better. It’s very green, and filled with good people.

Best moment, or fondest memory, of your career thus far? Probably it’s been the experience with my short film, Woodhouse. Winning prizes with it, getting a Vimeo Staff Pick. Just having people respond so positively to something that came out of my head. That was really nice.

Worst moment? A great commissioner once said to me: “What we do isn’t brain surgery. Nobody’s going to die”. So, like, I try to keep things in perspective: it’s never been that bad. My first video with a major label was cancelled the day before the shoot because the artist literally disappeared. That wasn’t fun. But it’s pretty hilarious in hindsight.

Person you most admire? It has to be people. The ones I know: my editor, Ryan Beck; my first ever (and hopefully last ever) DoP, Jaime Feliu-Torres. Years & Years’ manager, Martha – she’s unstoppable; everyone at Blink and Colonel Blimp – Nathan, Paul, Corin - they’re the best. People I don’t know: Frank Sinatra, Jerry Seinfeld, Kermit the Frog.

What advice would you give to someone starting out in music video production? If you want to direct, look at stuff that’s not videos! I love paintings, novels, short stories, old photos, myths, rumours, maps, movies, memories, conspiracy theories, poems, statues, places, smells, nightmares. These are all better inspirations for your music video than other music videos.

What’s the big issue or issues facing music video makers right now? Lack of transparency. The whole process can get convoluted, and more communication would really be wonderful.

Any hot tips on who will be the future stars in music video in the next couple of years – directors or otherwise? Ollie Hogan is going to be a big art director. That boy works hard. Director-wise, it’s all about Colonel Blimp! But most specifically Pedro Martín-Calero. One day he’s going to be frightening. He’s already frightening.

Dawn Shadforth on Hurts' Lights: "Haven’t we all been there?"

Oscar Sansom captures a Royal Blood performance for a US talk show, with the excellent …