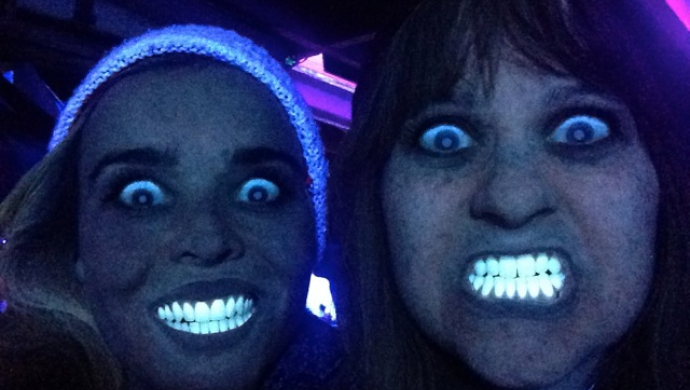 Directing duo De La Muerte are Debbie Scanlan (above left) and Liz Adams, who have established themselves as top exponents of the modern pop video with their prolific output in the past two years, working with the likes of Kyla La Grange, Hudson Taylor, Dido, Bakermat, Indiana - and most recently with their high-adrenaline promo for Higher by Sigma ft. Labrinth, shot in Innsbruck. Liz is 29 and grew up in Saffron Walden, Essex, while Debbie, 28, is from Ireland. They both now live in London, and De La Muerte are on the roster at Burning Reel.

Previous occupations: L: Editing mostly. Except that time when I was a masseuse which was the worst.
D: Cleaner, gardener, horse trainer, photographer

Favourite music video of the past 12 months? L: Was Chandelier in the last 12 months? Or Paulo Nutini Iron Sky.
​D: FUCK - Is it Sia’s Elastic Heart? I gave that a good old watch...

Favourite video of all time? L: That's too big a question, it depends on my mood.
​D: Terminator 2. I know it’s not a music video. I cannot think of a favourite music video. It’s so so hard.

Favourite publications/websites: Liz: I read Empire a lot and Vogue. And I get life advice and cat gifs from Reddit.
Debbie: Clickhole.

Favourite food/restaurant: L: Sushi for sure.
​D: Chillis, oysters or, you guessed it... Potatoes!

​Last movie you saw (and was it any good)? L: Does The Jinx count as a movie? (no, its a miniseries - ed) I've been telling everyone I know about it because it's incredible. Or I watched Anna Karenina the other day, by Joe Wright. It's so beautiful.
​D: Jurassic World - Mixed review: the raptors running was a highlight…

​Last gig you went to (and was it any good)? L: A friend's band called Childcare I think - they're amazing.
​D: Die Antwoord - yes, it was amazing. Thank you for asking.

Favourite bands/artists:  L: Not sure I have one right now. I'm listen to a lot of podcasts at the moment. Visually - Sia, Beyonce, Kanye West, Lana Del Rey are all fabulous.

Debbie: Woodkid, Alt J, anything from the New Orleans jazz scene of the 1920s - Oh god I’m kind of bad with music - considering my job... I like listening to rain and thunder sounds on the computer... does that help?

​What was the first music video you worked on - and what were you doing on that job? L: Kyla La Grange - Been Better (the first version). We made the second version later too. Debbie and I did everything really, we didn't have any money or crew! Just horses and a dog.
D: Same for me - Kyla La Grange's Been Better. We were literally doing everything on that job. I was riding a horse, making fireworks, location scouting, and doing make up. Also stopping the spiders attacking Liz in the Barn which was pretty hardcore…

​Favourite job of the past 12 months: L: Sigma and Labrinth up a mountain in the snow was so much fun.
​D: Our time in Austria with Sigma and Lab was brilliant - really funny times working with our team and getting so cold and tired we thought we might die. That or on a rooftop in LA last year for Bakermat - everyone was just lovely, and lovely food, and lovely warm sun.

What’s the next Big Thing you’re working on? L: That's a secret.
D: Oh we couldn’t possibly tell you that... ;)

What would most improve your life? L: Bernard's Watch.
​D: Oh God…. Living by the sea again...

Best moment, or fondest memory, of your career thus far? Liz: I'm really lucky that I get to work with one of my best friends - so there's a lot of good memories of all the stupid things we get to do.

D: Probably that moment that follows a shoot. The huge wall of tension just about to collapse - the hysteric laughter - all the hugs and short breathing over stupid jokes when you are all about to die. That and being asked at so many shoots if we are the runners - That will be a sad day when they stop mistaking us for young-uns...

Worst moment? L: That moment when you know you fucked up and it's definitely your fault.
D: Accidentally letting off a glitter cannon in one of our team’s face…It was the wrong way round. I still feel terrible - It’s making my feet hurt thinking about it. I think Liz will say the first shoot in the West of Ireland...Dammit… I didnt plan for the storm in JUNE!

Biggest frustration? L: That Jurassic Park might never be a reality.
D: Let’s say lack of communication on a larger scale.

Person you most admire? L: In work stuff - runners. In real life - my dad.
D: Hummm…. ​Either Paul Newman or maybe Loki or my mental family.

What advice would you give to someone starting out in music video production? L: This is really annoying advice, and not really advice, but you have to work REALLY hard otherwise there’s not much point.
D: OMG DONT DO IT! No seriously - Just make sure your worth is realised. Learn loads - don’t be a dicklord and trust yourself. We are all making this up as we go along - whilst learning as we go...

Any hot tips on who will be the future stars in music video in the next couple of years – directors or otherwise? L: Robots like the T-1000 - they don't even need makeup.
D: I hear there is a kind of hoover robot being developed that can pretty much do everything we do so I look forward to that. I really look forward to that.