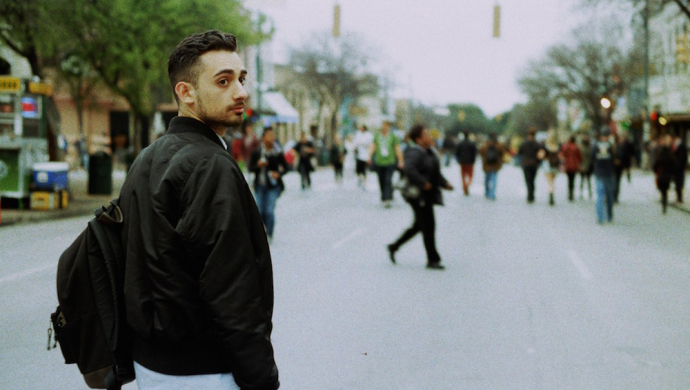 At 24, Chris Toumazou has already proved himself to be multi-talented music video-maker. As a director he has helmed acclaimed videos for Tropics and Cloud Boat, while as a co-founder of burgeoning production company COMPULSORY he has signed and produced several up-and-coming directors from far and wide (including Norway and Canada). Born in Chiswick, West London (of French and Greek parents) his work both as a director and producer has earned him UKMVA nominations as well as being selected at various festivals such as SXSW, BBC Music Video Festival, and International Music Video Festival Paris.

Education: I attended The Arts Educational Schools then went to the University of Westminster to study Film & Media.

Previous occupations: At school and university I was all about working at my local Blockbuster Video, which was the most fun had behind a counter since Clerks. General hustling, video designer at the Royal Court Theatre. Then came films and music videos..

Favourite music video of the past 12 months? I think it’s just a little over 12 months now, but personally So Me’s video for ‘Memory’ for Jackson & His Computerband is one of the most beautifully unfolding stories ever told on the format. I’ve always been a fan of smaller intimate narratives, this one feels very human and still warped with visual trickery, a perfect and smart balance for a video. Also one of our directors at COMPULSORY Kevan Funk’s video for Anne Trolle’s ‘Ribbon Arms’ had me shed a slight tear.

Favourite video of all time? ‘Stop The War’ by Speak The Hungarian Rapper. People were unfortunately not ready for this classic.

Favourite publications/websites: I didn’t know there were other publications or websites in public circulation, only PromoNews. So just this one. God is PromoNews. [Excellent answer, and actually true - ed]

Favourite food/restaurant: After a heavy night out I find myself eating the regretful delights of Morley’s fried chicken. That £3.49 wings deal though... But in all seriousness, there’s a small sushi joint near our office called Kisaku that is pretty boss. Also I guess you can’t go wrong with Franco Manca or Brgr Co.

Favourite drink/drug: Drink: A well made flat white served at approximately 9:30am Drug: Not my thing.

Favourite directors: I can only give biased answers, so our selective COMPULSORY roster of directors will have to take priority here, after all we did sign them so they’re very good. They are: Kevan Funk, Thor Brenne, Victor Pakpour, Max McCabe and Nryn.

Last gig you went to (and was it any good)? I watched ODESZA at SXSW this year which blew my mind. Tropics had an incredible show at Electrowerkz, and also Fakear played a banging show there too.

I’m really into this Lebanese disco track by Elias Rahbani at the moment called ‘Liza’. Worth checking out before it gets sampled by Jay-Z.

Currently reading/favourite book: Our head of production Kadri introduced me to B is for Bauhaus: The A-Z of The Modern World, so currently reading that, really insightful stuff.

What was the first music video you worked on - and what were you doing on that job? Like most people I was running. It was on a low budget urban video, not much fun really, but a great learning experience as with anything on set, getting stuck in is how you learn your way around. I was just excited to be on there so made the most of pretty much moving a C-stand and cutting some CTB gel…

Favourite job of the past 12 months: There’s 2 favourites: Directing Rapture for Tropics, and producing the ODESZA shoot in Vancouver.

Directing ‘Rapture’ was incredible to work with my usual family unit of collaborators that always come on board no matter how tough the project was to get going. My DP Rob White really made use of the little he had on the shoot/budget still shooting 3-perf 35mm so I’m very grateful how it all came together.

What’s the next Big Thing you’re working on? I’ll let you know when I hear back from the commissioner.

What would most improve your life? A holiday.

Best moment, or fondest memory, of your career thus far? The fact I walk into an office everyday working with some of my good friends. Also being selected at SXSW for two consecutive years is quite a compliment for us, 2014 for my video for My Panda Shall Fly and this year with our director Max McCabe’s piece for Moody Good.

Getting nominated for a UKMVA for Tropics’ ‘Home & Consonance’ was amazing too as it was one of my first videos.

Worst moment? Taking on a production commission you know you shouldn’t have."

What’s the big issue or issues facing music video makers right now? That there is no split revenue share on YouYube views for the directors and creatives behind the work.

Person you most admire? My parents.

What advice would you give to someone starting out in music video production? Make the right videos, not lots of videos. Become best friends with a good DOP and convince them your the next big thing even if you’re not. They’ll help you get there and vice versa if they haven’t yet.

Any hot tips on who will be the future stars in music video in the next couple of years – directors or otherwise? I’d say the COMPULSORY roster is built on building emerging and hot new talent, but apart from us there are lots of people always coming up. I’m not going to mention anyone until we sign them. You can read about it on PromoNews at a later date.

WIZ: "Being an artist is about confronting the dark side"