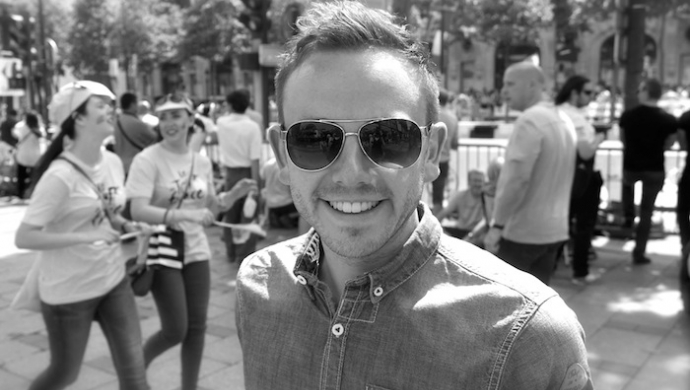 Nottingham-born Chris Roebuck used to be an actor. Now he's now one of the most sought-after editors of music videos in London, cutting some of the biggest British videos this year - including Sigma Ft. Paloma Faith "Changing" by Craig Moore, Jungle's Busy Earnin' by Oliver Hadlee Pearch, and recently, La Roux's Kiss and Not Tell by Alexander Brown. Chris is repped by commercial edit house Cut+Run London, working on a wide range of projects, including commercials, digital content and short films, as well as videos.

Education: The standard GCSE’s and A Levels, but my editing education happened on the job…

Previous occupations: Before editing at Cut+Run, I’d been an actor, runner and assistant editor. Yes…. I did say actor....

Favourite music video of the past 12 months? Alt-J’s Hunger Of The Pine by Nabil. I love this video. It’s such a simple idea, but it’s executed to perfection.

Favourite video of all time? I remember seeing Radiohead’s “Just” by Jamie Thraves as a kid and thinking WOW. That is definitely up there in my top 10.

Favourite food/restaurant: Nandos. I would love to say something a little more sophisticated, but anyone that knows me would know I was lying...

Favourite drink/drug: If I’m going out then an ice-cold beer… But if I’m going out out, then a Red Stag and Coke. Coffee – “liquid adrenaline” – is definitely my drug for the mornings…

Last movie you saw (and was it any good)? I watched Christopher Nolan’s “Memento” again recently - such a great film. I’m a huge fan of all Nolan’s films.

Last gig you went to (and was it any good)? I actually cannot remember...

Favourite bands/artists: Jungle, Hozier, Alt-J, The Heavy. Those are just the ones that spring to mind. I have an eclectic taste in music and am open to pretty much all genres.

"When I first started assisting I managed to delete a whole reel of rushes on a very quick turnaround job. I felt sick. One mistake you’ll only make once!"

Currently reading/favourite book: I’m not currently reading anything but my favourite books are: “I Predict A Riot: Murder, Extortion & Carrot Cake” by Colin Bateman - This was a complete page-turner for me and laugh out loud funny. Love Irish humour! Also, “Shutter Island” by Dennis Lehane - I was lucky enough to read this before the movie was made and I can honestly say the book is better than the movie and considering the movie was pretty damn amazing, that’s really saying something.

What was the first music video you worked on - and what were you doing on that job? Tinie Tempah’s Written In The Stars - directed by Alex Herron. I was the assistant editor on this.

Favourite job of the past 12 months: This is way too hard to narrow down to just one. My fave jobs this year in no particular order were: La Roux “Kiss & Not Tell” by Alexander Brown; Sigma Ft. Paloma Faith “Changing” by Craig Moore; X Ambassadors & Jamie N Commons “Jungle” by Emile Rafael; Jungle “Busy Earnin’” by Oliver Hadlee Pearch & JLW

What’s the next Big Thing you’re working on? Just finished cutting the video for Hozier’s next single, directed by Anthony Byrne. His music is great and I think he’s well on the way to becoming a huge household name.

What would most improve your life? A teleportation device - come on Apple, make it happen!

Best moment, or fondest memory, of your career thus far? This one is hard... I’m proud of everything I’ve done in my career so far so it’s difficult to single out one moment. So I’ll say that I feel the best is yet to come… So fingers crossed I can live up to that statement…

Worst moment? Luckily, I haven’t had many horrible moments, but one scared me a LOT! When I first started assisting I managed to delete a whole reel of rushes on a very quick turnaround job. I felt sick. One mistake you’ll only make once!

Biggest frustration? Tight deadlines and super quick turnarounds. This appears to be becoming more and more common. You need time to experiment.

Person you most admire? Definitely my wife Sarah for putting up with me and being there for me through the good and bad times. This job often comes with really long hours and she is the most understanding and supportive person in my life. I couldn’t do it without her.

What advice would you give to someone starting out in music video production? Get stuck in and stick at it!

Any hot tips on who will be the future stars in music video in the next couple of years – directors or otherwise? I see great things happening for Director Greg Davenport. I’ve been lucky enough to work with Greg since he started making promos and he is going from strength to strength. He has a style of visual storytelling that is so emotional, you really empathise with the characters in Greg’s videos.

Also the Directors at Familia Films (Francis Wallis, Craig Moore and Sashinski). These guys are great and have done amazingly well to build up a production company that is taking the music video world by storm. It’s always a pleasure cutting with them.