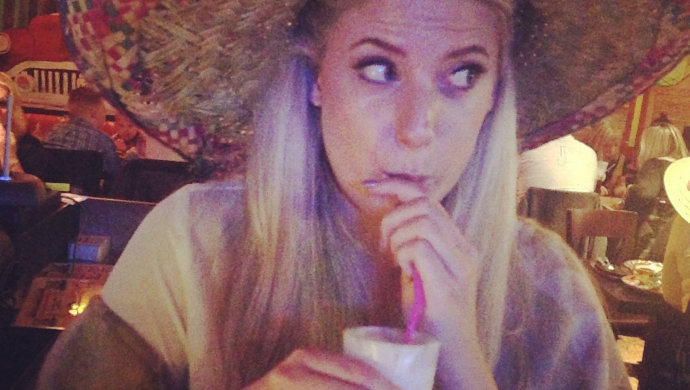 Dead set on working in Music Videos from a very young age, Carly Cussen started off as a runner soon after leaving school and steadily worked her way up until she could direct her own videos.

She cut her teeth by making videos for UK Grime scene artists such as Lethal Bizzle and Tinie Tempah, and eventually went on to doing pop videos for the likes of Olly Murs, Little Mix, Missy Elliott, and many more. Her style focuses on visually heightening artists' performances through clever visual ideas, eye-catching locations, crisp cinematography and energetic dance choreographies.

Some of her recent work includes the ultra cool n' edgy Hip-Hop dance-off for Diztortion's Put Your Love On Me and some lovely utopic summer visuals for Ella Eyre's Good Times. We thought, what better time but the present to get to know Carly better? So we asked if she might want answer our questionnaire, and luckily for us she said yes.

Education: Just plain old comprehensive school. I left at 16 and after months of begging production companies for a chance, jumped straight on set and never looked back.

Previous occupations: Is being a “maker of tea” an official occupation? I definitely did my fair share of that. I think they are called runners now.

Favourite music video of the past 12 months? I really enjoyed Kendrick Lamar's Alright - Amazingly creative from concept to colour. So many elements that just keep layering and layering. Awesome. I also re-watched Elastic Heart quite a few times. Its awkward and bizarrely stunning. I would love to work with Ryan Heffington.

Favourite video of all time? Gaga - Bad Romance, I watched it 10 times on repeat before realising I was obsessed with madness! It's beautifully deranged. It's like 5 people had different ideas and they all contradicted each other but they went and shot them all anyway! Genius!

Favourite food/restaurant? I'm a sucker for spice, but love Mediterranean and Mexican. Humous and chillies… yes!

Last movie you saw (and was it any good)? Yes it really was good, and something I would never usually watch. Fat Girl a french film directed by Catherine Breillat, If you have ever been self-conscious, miserable or had a bitch of an older sibling this will really ring true.

I also recently got into Orange Is The New Black (I know it's not a movie) but I'm addicted…another surprise for me.

Favourite directors? In the world of videos, Ryan Hope, Anthony Mandler, Sophie Muller, Christian Larson, Jake Nava, Dave Ma, Oliver Hadlee Pearch, I would clearly have a field day at Black Dog haha! There are so many directors I enjoy watching. I love Anthony for his colourful yet dark twisted tones, I LOVE Vince Haycock!

Last gig you went to (and was it any good)? The Weeknd, as always just him, a stage and music that I love because I can't relate to it in any way shape or form. Its interesting seeing a whole different world through the eyes of its addict.

Favourite bands/artists: I really like what Banks was making last year. Of course Sia is fantastic. I'm a big fan of Tinashe's earlier stuff, and I recently became a fan of Tink. The more interesting thing is my two favourite genres of music are alternative Hip Hop and classical. At home the only music playing is James Howard Newton. I love being taken out of reality.

Currently reading/favourite book: My favourite books are all very fantasy based, it all started with Phantastes by George Macdonald, as previously mentioned I love either being taken completely out of reality in to a non-existing world of fantasy or being taken so far into a hard reality its not relatable on any level.

What was the first music video you worked on - and what were you doing on that job? Fun question, I was a stand-in/runner on a Max and Dania music video for Jay Sean. I was 16 years old but I still remember the drinks order. Diet coke/pepsi for Max and Earl Grey tea for Dania. And I make a cracking cuppa cha!

Favourite job of the past 12 months: Really enjoyed Wretch 32, 6 words and Alexa Goddard, We Broke The Sky, I love an epic landscape and an honest performance. Both seem to have that essence. And building a mountain of speakers was just hilarious!

What’s the next Big Thing you’re working on? An epic sci-fi fantasy blockbuster with an all star cast and billions of dollarrr…. Nope, I'm actually working on a really interesting narrative video. Something to show off my story-telling side!

What would most improve your life? A helicopter or small flying car contraption?... Traffic needs to go into room 101…

Best moment, or fondest memory, of your career thus far? A tweet from Simon Cowell… or Working with Missy Elliot…? Both are going on my CV haha!

Worst moment? We really want to go there ay… haha. A 27-hour grade which seriously took a turn for the worst after the 18th hour. I don’t think I even have the guts to mentally revisit that day/night/day. Luckily we delivered 3 hours before it was screened at a showcase.

Biggest frustration? What to order for lunch at a grade, the menus in post houses have way too many choices especially at Smoke & Mirrors… I know everyone has been there… way too many opinions and just as you think you know what you want. The post producer (Andy) recommends a place that isn't even on the menu but sounds too good to resist…. it's probably not even frustration… it's the best part of grading.

What’s the big issue or issues facing music video makers right now? Accessibility!! Everything now being online has opened up the accessibility gate.

I guess it's a double edge sword. On one side, it's great to have so many platforms to showcase work. Blogs, websites, social media… all amazing places to promote your art. But the other side of the blade breeds too many people picking up an iphone and calling themselves a director because they shot an ice-bucket challenge. I know art is art BUT now there are 4 music video directors in my immediate family and three of them are under the age of 10! I just cant get taken seriously anymore haha!

Person you most admire? I admire David LaChapelle for being brave enough to do everything he wants… and in the most controversial way possible to mankind!

What advice would you give to someone starting out in music video production? If you are starting off as a runner, make sure you can conjure up a good cup of hot tea... it will get you further then you think!!!!

Any hot tips on who will be the future stars in music video in the next couple of years – directors or otherwise? Charlie Galustian is crazy mental talented. He blows me away with what here hears in music that is often overlooked. I'm really looking forward too seeing what he does in the future.