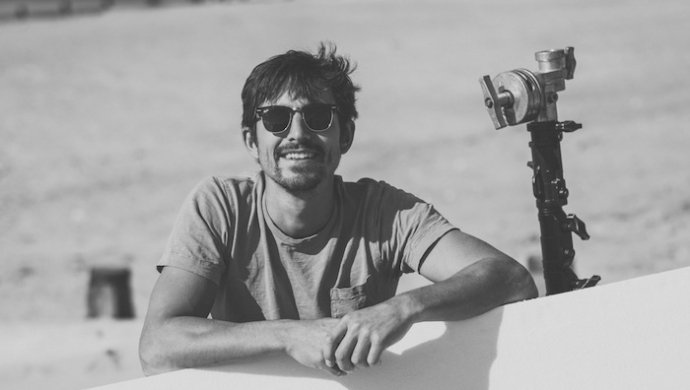 Having started in the lighting end of the business, Ben Fordesman has been one of the go-to DoPs in British music videos since 2012, and the half-Dutch, Essex-raised 29 year old has gone on to shoot numerous acclaimed videos including Duke Dumont's I Got U, Ella Eyre's If I Go, Lapalux's Puzzle, FKA twigs' M3LL155X, and Gabrielle Aplin's Sweet Nothing. We decided it was high time we discovered a little bit more about Ben...

Favourite video of all time? Lucas's Lucas With the Lid Off directed by Michel Gondry. Technically genius.

Last movie you saw (and was it any good)? Sicario, shot by the master Roger Deakins. Yes, it's very good.

Last gig you went to (and was it any good)? It was a while ago now, but I saw the Foals gig at the Royal Albert Hall, such an awesome location to see a gig.

Currently reading/favourite book: Currently reading Psycho Vertical – A true life story self-written by climber/alpinist Andy Kirpatrick. His struggles to live a normal family life whilst climbing some of the world’s most dangerous climbs.

How did you get a start in the business? I made it on to a feature called The Chemical Wedding back in 2007 starting out as a trainee spark.

Having an electrical background gave me a head start in the lighting department. I worked for years on features and TV dramas.

I then went on to gaffer music videos and commercials. DPs coming from a lighting background is less common.

What was the first music video you worked on - and what were you doing on that job? Gaffer on Turin Brakes, Something in My Eye directed by Karni & Saul, a great video.

What equipment do you rely on most to do your job? A good coffee machine makes a huge difference.

Favourite job (or jobs) of the past 12 months? Paolo Nutini, One Day & The Staves, Blood I Bled.

What was the most challenging job you’ve worked on? Every video provides its unique challenges, but one very memorable experience was on Duke Dumont, I Got U three days wearing a neck-breaking POV helmet rig around Thailand in soaring heat. Riding an elephant, motorbike, jet ski, paragliding, bungi jump, kayak, jungle trekking, swimming and many more... it really was physically tough!

What’s the Next Big Thing you’re working on? Working on a couple of upcoming projects with Ian Pons Jewell which I'm very excited about.

What would most improve your life? To live closer to the mountains.

Best moment, or fondest memory, of your career thus far? The Staves' Blood I Bled shoot in and around Mumbai, India with director Nick Rutter and producer Emory Ruegg (above).

I was overcome by the locations and kindness of the people we met along the way, the entire experience of shooting in India effected us deeply.

Upon wrapping we stood on a rooftop overlooking Uran and an almighty storm broke out, we screamed hysterically with joy as the lightning striked all around us, the Navratri nine-day festival continued to flow... The job was wrapped and we had awesome rushes, at that moment nothing else mattered.

Worst moment? I once attempted to be an actor, it was a traumatic experience and I can only start talking about it now.

Biggest frustration? Having to drop shots due to a tight schedule...

Person you most admire? All the directors who write treatment after treatment, wavering fees while others are paid, leading us on the battlefield. And to all my crew who have stuck with me through thick and thin.

What advice would you give to someone starting out in music video production? Entering the industry with a trained skill is useful, I found being an electrician prior to working in lighting helped me to pick things up much quicker. I've come across people who initially wanted to direct but after years in the industry have become very successful art directors.

Get on a set, get used to working as a team, follow the jobs that make you passionate and not rich, expose yourself and be helpful to all departments, you will quickly discover your strengths and weaknesses and the job you end up doing will often find you.

Any hot tips on who will be the future stars in music video in the next couple of years – directors or otherwise? Holly Blakey – loving her work as a director.

Buxton is back with BUG 49 on December 4th and 11th