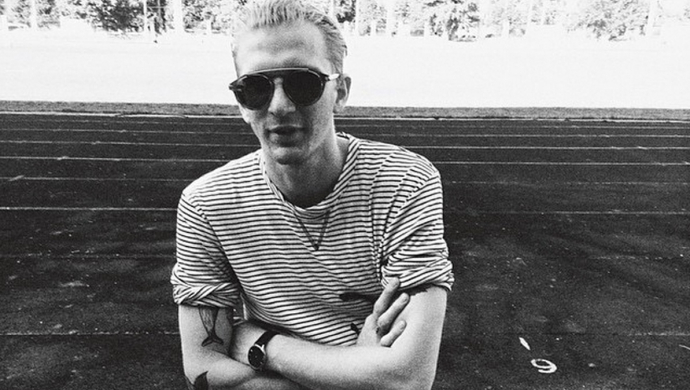 Adam Scarth has been one of the DOPs on our radar as of late, grabbing our attention through his prolific output and considerable range of cinematographic work in music video over the past year or so. In the most recent series of videos for The Maccabees for instance, Scarth captured some lovely, attenuated scenes on infra-red film for Something Like Happiness and employed a myriad of different photographic styles for Marks To Prove It. Our curiosity piqued, we asked Adam if he'd be interested in answering our questionnaire, with a few extra questions thrown in...

How did you start out in the business? When I graduated from university, I pestered enough people for work and I was lucky to land a job on a few features as a trainee. From there I worked up to a 2nd AC mainly working on commercials and music videos for some really great DOPs and focus pullers who I learnt a lot from.

What’s the piece of kit that you depend upon the most, and love the most (two things, if they’re different!)? The piece of kit that I depend on the most is my light meter. I use it on both film and digital jobs and I would be lost without it. I hate the tendency these days to rely on monitors or false colour. I think it’s the only true way of keeping a consistency in your images. The piece I love the most is seeing a lovely stack of 35mm cans when I walk on a set.

When did you decide you wanted to become a DoP? I knew from my teenage years that I wanted to work in film, but I didn’t know then what a DOP was. It wasn’t till I got to my first year of university when I thought I wanted to be a director that I realised that the visual language of a film and how you can tell a story with light and images is what really fascinated me.

What was the most challenging shoot you’ve worked on, and why? I think the most challenging work I did was when I fist stepped up to be a DOP. I got offered a job by a charity for a director and me to travel to conflict zones and places of natural disaster to make mini documentaries and take photographs.

We were away for months at a time and beyond the physical drain of the environments we were in, there was a real responsibility to make true images that represented the lives of people we met respectfully.  This really makes you think about the images you are creating and what they are saying.

What’s your favourite two videos you’ve made, and why? My favourite two videos I have shot are Last Night in Paris, Pure directed by Karim Huu Do and Jungle, Julia by Oliver Hadlee Pearch (see below). I think with both films there was a real chance to tell the story with the images and build a visual language rather than just creating pretty pictures. Both films were a really expressive and exploratory process, which was so freeing for me as a DOP, as there were no constraints in terms of our creative thought process.

Previous occupations: Apart from working at pubs when I was at school and a call center when I first moved to London, I was a Camera Trainee and then a 2nd AC before moving up to DOP.

Favourite music video of the past 12 months? I think the Florence and Machine series by Vincent Haycock is brilliant; it’s really visceral imagery by Steve Annis.

Favourite video of all time? UNKLE, Rabbit In Your Headlights directed by Jonathan Glazer.

Favourite food/restaurant? Favorite food is any kind of fish and my favorite restaurant at the moment is a Peruvian place called Andina.

Last movie you saw (and was it any good)?  I watched Testament of Youth by James Kent the other night. I’m not normally a fan of period dramas and expected a typical Merchant Ivory style film, but instead it really blew me away, it felt very current and real. Rob Hardy did a phenomenal job with the visual language that drew you right into the characters' experience.

Last gig you went to (and was it any good)? To be honest I haven’t been to a gig in a long time.

What was the first music video you worked on - and what were you doing on that job?  I started off working as a Camera Trainee & 2nd AC on drama and commercials so it was a while until I got on a music video shoot. The first one I can really remember was assisting on Paolo Nutini, Coming Up Easy.

Favourite job of the past 12 months: I got to do a great ad last November that lasted 4+ weeks shooting in Tanzania, New Zealand, Thailand and San Francisco, it was a fun shoot. I went into it as the outsider knowing no one else on the crew and by the end I came away with some really close and great friendships. One of the best things about this job is not knowing who you are going to meet next.

What’s the next Big Thing you’re working on? I’ve got a video shoot coming up with my good friend Georgia Hudson which is always fun and I have some possibilities of a few drama projects that are very exciting.

What would most improve your life? People saying “Yes” when I say, “We should shoot this on film.”

Best moment, or fondest memory, of your career thus far? When I was standing on top of a bus in Tanzania, at sunset to set up a shot with two of my really good friends, my gaffer Seth and my then focus puller Felix and all of us realising that we have one of the best jobs in the world.

Worst moment? Back when I was a loader and at the end of a very long few weeks on a drama and I accidently exposed a role of film and had to go and tell the DOP just as they were about to wrap; every loaders worst nightmare.

What’s the big issue or issues facing music video makers right now? I think most people would instantly say budget, but some of the lowest budget videos I have done have been the best. I think the biggest challenge is the freedom for good ideas, a lot of the time I see videos/ideas get so diluted down or manipulated to a stage where they lose everything that made them good to start with.

Person you most admire? After my beautiful wife Sophia who has always been there for me (and put up with me disappearing off for jobs all the time), it would be my regular team Seth Crosby, Pearce Crowley, Felix Schmilinsky (who has left me to start DOPing himself, so watch this space) Eira Wyn Jones, Andrew Fletcher and Malte Hübner. They are some of the most talented people I know and are great collaborators, but most importantly they are really lovely people that I enjoy spending a lot of time with.

Biggest frustration? The lack of diversity on set; it is a very elitist industry as a whole, from music videos through to movies. It is starting to get better but I would love to see more diverse crews in every department at every level.

The greater the mix of people from different backgrounds, the broader the perspective to what we are making and only makes what we are doing better.

What advice would you give to someone starting out in music video production? Make sure that you love doing it. We get to do some amazing stuff but it’s not always the glamorous job people think it is. We spend a lot of time in crazy locations at night working long hours in the cold, mud and rain. It’s not a good job for someone who doesn’t really want to be there, but if you love it even at the worst moments you are still having fun. After that just work as hard as you can on the job you are doing, people will soon notice and then you just build on that.

Any hot tips on who will be the future stars in music video in the next couple of years – directors or otherwise? I think Holly Blakey is a very bold and exciting director and is really going to blow up this year. Daniel Kragh-Jacobsen who is already well established, but I’m really excited to see what he comes out with over the next few years, I think he’s a very exciting director to watch and is on the rise to big things.
I also think there is a lot of talent in my two director friends Martyn Thomas and Claire Kurylowski, and in the cinematography world I expect great things from Felix Schmilinsky.

Videos Of The Month: September 2015