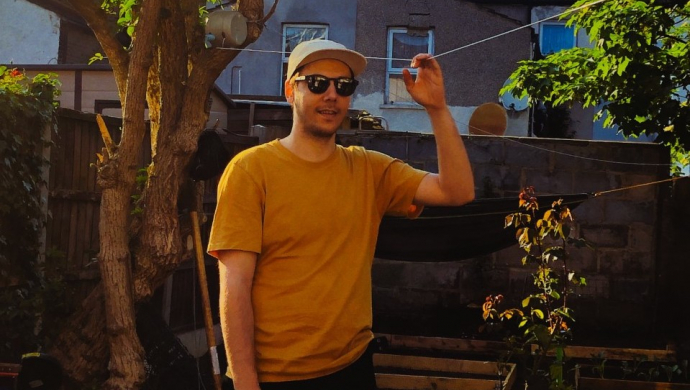 Colourist Vlad Barin is starting to make a name for himself down at CHEAT, and his work has continued now he's been at home the past few weeks. That's actually close to CHEAT HQ, in London Fields, as Vlad who comes from Romania and has lived in the UK for a decade, is now a Hackney lad through-and-through.

The lockdown has had its share of frustrations for him - mainly with the government response to the crisis. But then, as with many people at this time, he finds that cooking nourishes the soul as well as the body...

What were you working on before the lockdown?
As a colourist on shortform, every day you’re working on something different; from commercials to promos and short films. There was quite a lot going on before all this, then a week of widespread panic came when it started and kind of broke that wave a bit.​ In the week before the lockdown I worked on a very beautiful promo with director Dave East, and the last job I did in CHEAT was a short film with DoP Olan Collardy, who is always such a pleasure to have in the room.

What are you working on now?
I’ve managed to keep more busy than I expected during the lockdown to be honest. At the beginning, the remote process took a bit of adjusting to as the feedback window is a little longer. But to be honest that just gives me time to re-think, view it a few more times and decide what to change. Often my notes coincide with the feedback I get and I certainly feel like everyone is a bit more relaxed in their approach, which I like.

I’ve been working on the Gorgon City promo - with myself, producer Mickey Voak and DP Ahmet Husseyin in London, alongside director Eric Maldin of Stadium who was just waking up early in LA to join us on the call.

I also have another promo in the works, shot on 16mm by my brother DoP Tom Doran, and director Sion Thomas for the Welsh band Private World - keep an eye out for this promo!

What's the most surprising, or least predictable thing, that's happened to you during quarantine?
The absolutely disgraceful way the British government decided to deal with this. They knew what was coming. I don’t understand how anyone thought: oh, maybe it won’t hit that hard here. Telling people nicely to “stay home, save lives” doesn’t work and they should have known that.

As an example; they’ve closed Victoria Park if you’re not actively moving. But then everyone just went and sat all weekend in Hackney Marshes - very effective! This is both the most surprising and least predictable.

What's the favourite part of your daily routine?
Definitely having time to do some exercise. I have been mentally preparing to change something in my daily routine for some time, and hopefully this period will help me make it permanent. And just generally having more spare time, I’ve sold some things I had around the house and bought a Voigtländer film camera, which I am well excited about.

In future, maybe everyone will realise we can be more relaxed: no more promos shot today, and released the next day with no grade!

Are things getting harder/better/staying the same?
I’d say I’m getting used to this, but need to be quite strict in some aspects. I do miss being with people for sure. I don't think we can understand yet how this will change our behaviour in society in the future. It might be more difficult to get used to life after... who knows.

What have you learned about yourself during quarantine?
Well, I certainly don’t mind working from home, haha! I’ve been trying to do other activities as well, but also sometimes you wanna just procrastinate all day and basically do nothing. I took up painting about a year ago, and have been trying to finish a couple of pieces while in quarantine, but ended up just going over and over the same little areas of them as I wasn’t happy with what I did - I guess I am still trying to figure out techniques and what not.

I am also planning to apply for a British passport so I started to read up on the 'Life In The UK' test, but it just doesn’t spark my interest much, haha!

Best meal you have eaten/are regularly cooking (send photo, if poss!)
I don’t think I’ve cooked the same meal twice so far! I really like cooking - it’s a struggle in these times as you seem to always be missing one of the key ingredients of the recipe, and I like to stick to my recipes. I made this Chinese orange chicken yesterday for the first time and it was dangerously good!

I made this orange chicken yesterday for the first time and it was dangerously good!

Best thing you’ve watched, or heard, while on lockdown, and why?
I really liked Unorthodox, as it has so much character and really throws you into that story. Also the new Jordan documentary The Last Dance as I was a massive basketball fan growing up and it throws me back into the emotions I used to have as a kid playing ball.  The Hollywood series is a bit nuts in a good way. And also Normal People on BBC3 was so sweet and captivating.

How's your Work/Life balance at the moment?
It’s quite a mix of both and I enjoy being able to do work stuff and life stuff almost at the same time. Maybe everyone will realise that we all can be a bit more relaxed in the future - no more promos shot today and released the next day with no grade on please!

• Vlad Barin is a colourist at CHEAT. Check out Vlad's reel here.

Wes Nelson thrives in a surreal suburbia, in Oliver Jennings' offbeat promo for Nice To Meet Ya.

Up-and-coming singer Haiku has a sensual and intimate showcase for her single Paradise, …