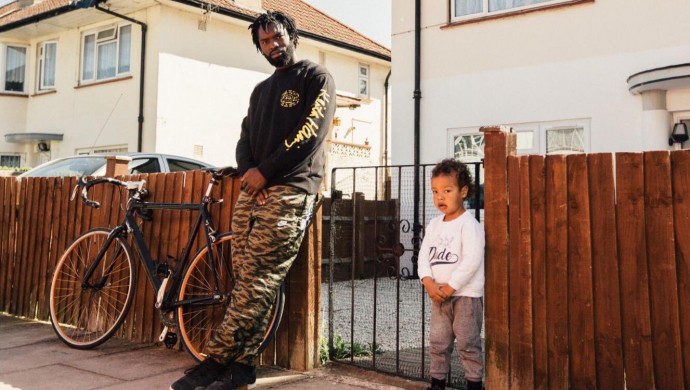 He's one of the hardest working directors in music videos. Now he's forced into lockdown, Meji Alabi (above, with son Godwin) has been enjoying some R&R at home with his family in London, and reflecting upon his achievements, and intense workload, of the past few years.

But then, on top of that, he has also launched his own chat show, talking to music video creatives, on Instagram Live...

What were you working on before the lockdown?
I had quite a few music videos - Jamaica and Nigeria were on the books - and had a few commercials locked in before the lockdown. Also in the early stages of writing some scripts for shorts and such... But who isn’t? :D

I’ve found it’s reignited my hunger to create even more.

What are you working on now?
I’ve just finished post on one promo. In the early stages of VFX for another promo. And just finishing up the final bits of an ad I worked on for a charity. So I spent the first few weeks of lockdown with busy with remote edits and going back and forth with agency. It’s actually been quite therapeutic to execute the process from afar...and also have more time to sit with things.

What's the most surprising, or least predictable thing, that's happened to you during quarantine?
I think the urge to cook my own food - and falling in love with it. And eating breakfast. I actually love going and buying food and making it. Something I’ll actively try and do more in post-corona days.

Also starting up REAL TALK on my Instagram page @MejiAlabi - where I talk to my peers and other fellow creatives about life in the creative industry on Instagram Live. It’s gotten some traction, and I’m not necessarily a public speaker so I found that quite cool. So far we’ve had DP’s Olan Collardy and Stefan Yap, and directors Koby Adom, Olivia Rose Garden, Nabil, and my Black Dog compatriot Leonn Ward. So it’s been an awesome lineup so far. Next up is an absolute legend - Anthony Mandler... really looking forward to that.

What's the favourite part of your daily routine?
Getting outside. I’m up and out at 6:30am for the past week to try and reclaim/relive my former glory days. The weather has been so great that just going for a cycle or a run or to skate is super satisfying. Also playing with the kids outside and teaching them new things is great. I was travelling so much before COVID-19 every one of these moments is priceless for me. It’s my way of turning this negative situation into a positive.

Are things getting harder/better/staying the same?
I’m privileged to have worked a lot last year so I managed to put some aside, so economically I’m ok....for now. But mentally I’d say we’re all getting a little bit restless. It’s a big change. I’ve found it’s reignited my hunger to create even more. I think I’m going to start constructing little short films and camera tests in my house like I used to or something. I manage to keep myself pretty busy.

What have you learned about yourself during quarantine?
It probably sounds cliche by now. That there’s so much more to life to enjoy outside of the filmmaking music video world. It’s so easy to get wrapped up in everything. This quarantine has forced us to take a step back and re-evaluate the important things in life. Certain things that were so important have literally just disappeared so for me it was a much needed priority check. I’m going to make an effort to bring some of these elements into my lifestyle post-quarantine.

Best meal you have eaten/are regularly cooking (send photo, if poss!)
I’ve been on the grill quite a lot - Made some chicken shish-kebab things with pineapple. So good.
Sorry for the low res photo :D

Best thing you’ve watched, or heard, while on lockdown, and why? And the worst...?
I’ve just finished Marvel’s Luke Cage.. I was skeptical at first but it’s really good. Also Atlantics which was great. A third into The Irishman as well.

As for the worst thing I’ve watched....I tend to protect myself from watching stuff I don’t think I’ll like or hasn’t been recommended but I’ve been enjoying loads of memes. That’s bad enough. Shoutout @DirectorsContent.

How's your Work/Life balance at the moment?
Better than it’s ever been.

• Meji Alabi is represented for music videos and commercials by Black Dog Films in the UK and US, and is co-founder of JM Films, based in Lagos and London. See Meji's showreel here.