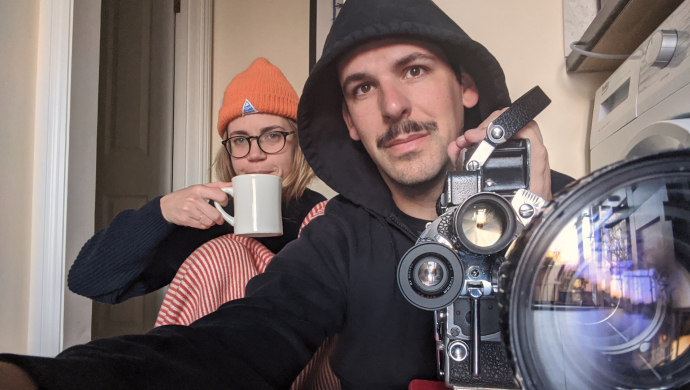 Greg Barnes and his girlfriend Frances Van Jaarsveldt (above) have been in lockdown at their home in Hackney Downs, East London for the past month. But that hasn't stopped Greg's urge to make films. The music video director is developing a sideline as a wildlife cameraman...

What were you working on before the lockdown?
I had just returned from Lisbon, shooting a short travel doc about their food culture. Thankfully that edit took me into the second week of lockdown. Aside from that? Pitches. Always pitches...

I’ve found ways to film anything and everything around the flat.

What are you working on now?
Probably like a lot of filmmakers in isolation, I took the chance to right some wrongs in my edit archive. I managed to re-cut a short ad starring my father that’s been hanging over me ever since 2016.

Aside from that I’ve found ways to film anything and everything around the flat. A cat is outside the window? Film it. Doing the washing up? Film it. The postman is arriv... film it! And pitches.

What's the most surprising, or least predictable thing, that's happened to you during quarantine?
We’ve started to foster a relationship with the foxes who live opposite our kitchen.

What's the favourite part of your daily routine?
Fostering relationships with the foxes opposite our kitchen. We woke up at dawn for almost a week to sit and watch them return from their nights out. I think they’re warming to us.

Are things getting harder/better/staying the same?
It’s hard to say. Some days hit different to others. We’re definitely finding a rhythm.

What have you learned about yourself during quarantine?
Despite being a WFH hermit for almost 10 years now, I absolutely do need society to exist outside for that to feel normal. Turns out I bloody love foxes too.

Best meal you have eaten/are regularly cooking (send photo, if poss!)
At the start of the year I vowed to master Cacio e Pepe. I haven’t yet, but I’ve had a lot of practice. You’d think a three-ingredient meal is simple, but I can complicate anything.

Best thing you’ve watched, or heard, while on lockdown? And the worst...?
We’ve started a film club with our friends; each Sunday we pick a film we haven’t seen and chat about it after on FaceTime... Through that I finally saw Days Of Heaven, and a Colombian film called Monos, both of which I loved.

I also saw Scanners for the first time, which was... Scanners...

How's your Work/Life balance at the moment?
Probably the best it's ever been. But hopefully I can forget all about that glorious zen once we get back to normal.

Jack McGinity on his favourite music videos - by Oscar-winners!