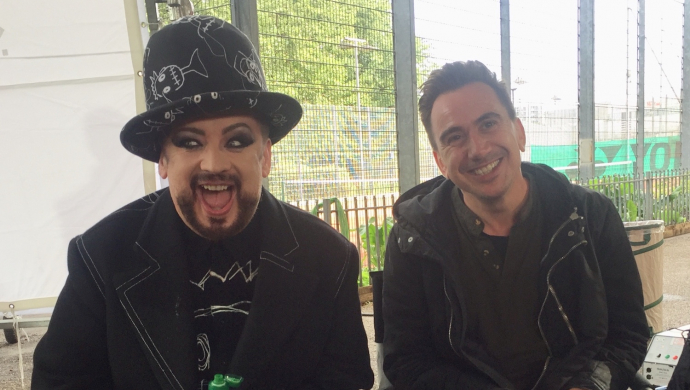 Andy Roberts, music video director representative, is working just as hard during lockdown as in normal times. It can be difficult, stressful and a thankless business... the usual stuff, then - but with bells on.

Andy finds solace by recalling a near-encounter with a pop star (not Boy George, above with Andy, another one), establishing a good breakfast routine, and occasionally watching a few classic music videos from a bygone age...

It was like Shania was looking right at me.

What were you working on before the lockdown?
I was high on life because Marc Klasfeld had just shot a video for JoJo who, I shouldn't need to explain, sang the classic Too Little Too Late. Yes, I am "a gay" and I love my pop. Pop saved my life, but that's another story.

I had just got back from LA where Jen Herrera (Queen of Las Bandas) and I met loads of producers and directors and Shania Twain floated right past us in the lobby of one of the labels. She spun round and laughed (in slow-mo as I remember) and said something charming ("I'll meet you in the garage") to her friend who was patting Jen's dog, the legendary Polly Walnuts, who I was holding at the time. So it was like Shania was looking right at me.

Then we met Declan Whitebloom (who we rep for the US) who cut all her early classic videos and told me some stories (that only made me love Shania more). And I met Jojo Siwa on a Klasfeld shoot. It was a month of powerful Jojos. Needless to say I was high on life (and MedMen). Oh, and I flew there with the glorious Isaac Rentz who'd just been in London to shoot Mabel's Boyfriend video (above) with Semera. It was such a great flight; I finally got to watch the monster flick Crawl and they gave me two meals so I didn't have to choose between meat and veg. The best.

There's a lot of "hurry, hurry, silence" going on, as plans change... I feel for the commissioners.

What are you working on now?
Animation, mixed media, and my patience. There's a lot of "hurry, hurry, silence" going on as plans change at the labels, understandably. I feel for the commissioners. It's not their fault but they probably cop a load of grief anyway because emotions are all over the shop.

Newbies are getting breaks which is fun to see. I guess it's business as usual in a lot of ways (I'm still chained to my laptop) but somehow busier than ever. Our wondrous producers around the world have also been finding some exciting new talent and that's always a buzz.

What's the most surprising, or least predictable thing, that's happened to you during quarantine?
Electrocuting myself after a long, trying day. I didn't see that coming. Took it like a champ though. Then took to my bed (aka my desk).

What's the favourite part of your daily routine?
Work routine: Eating. Closing the laptop. And any time I see a clever FX test land in my inbox fills me with joy.
Dance routine: 80's backup singer moves (whenever I open the fridge in the morning. I don't know why. Gay tourettes?).

When watching the news became too much I made a playlist of comfort videos. That was a good weekend of TV.

Are things getting harder/better/staying the same?
Harder in some ways because different commissioners at different labels in different countries are at various stages of acceptance or lockdown or legal policy, so more back and forth than usual. But easier in others; I finally have a rock solid excuse to stay in and I don't have to cut my hair.

What have you learned about yourself during quarantine?
I can make, and enjoy, French onion soup (thank you, Ailsa Robertson!).

And I can run up a hill if I really want to. I realise it was just quarantine madness. I was wearing trackie pants so I got caught up (like Usher). Felt great, but once was enough.

Best meal you have eaten/are regularly cooking (send photo, if poss!)
I've finally settled into a breakfast routine. The recipe isn't too complicated:

2 Weetabix
1 banana
Splash of yogurt (whatever you've got)
Milk

Best thing you’ve watched, or heard, while on lockdown, and why?
BEST: Padmaavat (Amazon), Self Made (Netflix), Unorthodox (Netflix), Noughts & Crosses (BBC. Go Kibwe!), Avengement (Scott Adkins is Britain's greatest living actor), Ragnarok (Netflix), the Circus Of Books doc (I lived above the shop in West Hollywood in the early 90's but that's another story), My Name Is Dolemite, all the Shaw Brothers movies on Amazon, Longest Day in Chang'an (a series on Amazon. It's like '24' in medieval China), Looking: The Movie, Real Housewives of Beverly Hills.

When watching the news became too much I made a playlist of comfort videos. That was a good weekend of TV. I think everyone should watch Janet Jackson's Pleasure Principle once every few years. And Lionel Richie's Dancing On The Ceiling. I once wept watching that one (just out of one eye). I was in my thirties. It's a long story. But that's the power of music, videos and memory, innit? It's not just "content"; they mean something.

I once wept watching Dancing On The Ceiling (out of one eye)... that's the power of music, videos and memory, innit?

A super smart commissioner once told me that he/she didn't think music videos got really good until the David Fincher era but, looking back on it, I think they were just messing with me. Sadly, I took the bait. I couldn't let that lie. I was like, what about Bob Giraldi? Go watch Love Is A Battlefield! Or what about Can You Feel It by Doug Trumbull?! I don't think they really believed what they were saying though. They may share my love of double denim but they're not a monster. I thought, maybe they didn't have a TV in the 80's. Maybe they were backpacking. You know, empathy.

WORST: I'm loving Gangs of London (The Raid films are incredible) but the old "gay character has to be a drug addict slut psycho" trope in episode 2 was disappointing to see in 2020.

How's your Work/Life balance at the moment?
LOL! I'm just grateful to be working (thank you, Jen!). And in music videos! I mean, Howard Greenhalgh took that photo of me and Boy George. Howard "Black Hole Sun" Greenhalgh. I've met kids who weren't even alive when that came out who got into music videos because of its impact on them. Hence the weird grimace on my face in that photo (I'm pinching myself... through my face).

Also, I'm single and childless, so what else would I be doing? That looks pretty sad in print. I do try and play some God of War at the weekend though, for stress-release. Or Captain Toad: Treasure Tracker if I need to really calm down. If that fails, and I only have a few minutes, watching Jake Nava's Mis-Teeq video for Scandalous, or his Brandy video for Who Is She 2 U. Does the trick every time. Don't get me started on those. That's another story.

• Andy Roberts represents a host of talented directors at Las Bandas Be Brave in London. Hopefully he'll tell us some of his other stories soon.