Q&A: Zhang + Knight on creating dystopias, and working in China 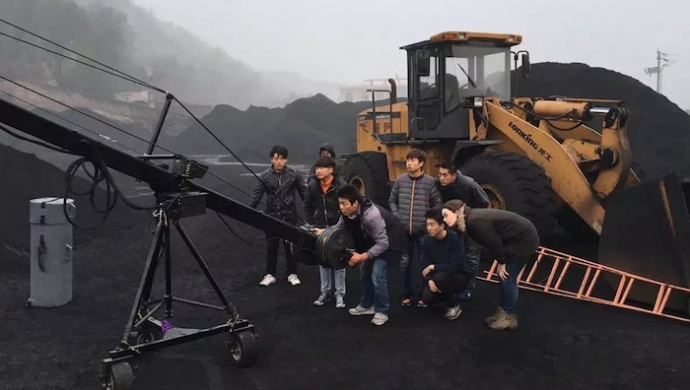 Zhang + Knight have not only had a busy 2017 so far, it's had some hair-raising moments. The directing duo - that's Linden Feng (Zhang) and Hannah Palumbo (Knight, both far right above) – joined Agile Films late last year and they have been impressively prolific ever since, with videos for both up-and-coming artists like Noga Erez, Skott and Songe, and well-established talents like Mark Lanegan, and two for Ghostpoet.

Before music videos, Zhang + Knight worked in China, making officially sanctioned films - an experience that has been a strong influence on their work since. But working in China without the support of its all-powerful government - as they did on their most recent Ghostpoet video for Freak Zone – comes with real risks.

Where are you from? When did you meet, when and how did you start working together?
Z: We’re from Wales and Letchworth Garden City, and we were both last minute entries into the film course
at York.
K: I think the first thing we ever made together was for an exam. We were allocated to the same group totally by accident. It was a music video about a transvestite cleaning lady with multiple personalities. It was not good.

What was the film that kickstarted your career?
K: Notion for Ato (above, below). We used our savings from our illustrious careers as propaganda filmmakers in China to make a music video about our dissatisfaction with our former employers. It took nearly two years and bankrupted us.
Z: My dad told me it was the stupidest decision I had made since choosing to study film.

"My dad told me it was the stupidest decision I had made since choosing to study film," Linden Feng (Zhang) on making Ato's Notion

How has this year been for you so far? What have been the highlights?
K- Diverse. Each shoot has had its highlights: dousing a sofa in petrol, setting it alight and throwing it from the 8th storey of an abandoned building for Dance While You Shoot was a pretty exciting start.
Z - When we were shooting Glitter N Gloss for Skott two of the snow mobiles had to be written off - turns out you shouldn’t really run them on areas with no snow.

K The two Ghostpoet shoots were definitely the most eventful though. For Immigrant Boogie we had to continuously stop the shoot because we were bombarded with these insane hailstorms all day.
Z - Freakshow was crazier. At one point there was a thunderstorm which made all the sewers overflow. We had to wade through a literal river of excrement. And on top of that we got arrested. Any shoot that ends in poo and jail is not one easily forgotten.

Apart from directing videos, what other things do you enjoy doing?
Z: We have a pretty impressive Minecraft base. It’s a death fortress inside a volcano.

What’s your favourite art/film/videos/TV of the past few months?
K: I’m all about handmaids this year. Really loved The Handmaid’s Tale and The Handmaiden.
Z: It’s definitely not current but we’ve recently really gotten into this horror manga writer called Junji Ito. We read a story about this boy who becomes obsessed with drinking cooking oil. I think he ends up drinking so much that he turns into a ball of puss and explodes. It’s just the creepiest thing ever.

"Dystopias let you explore imagined scenarios which really get under people's skin. We also really get off on the sight of concrete" Hannah Palumbo (Knight)

You’ve been exploring visions of the future in your two recent videos for Ghostpoet, Immigrant
Boogie and Freak Show. What’s the fascination with dystopias?
K: Dystopias let you explore imagined scenarios which really get under people's skin. That's why we’ve always naturally been drawn to them. We also really get off on the sight of concrete.

Tell us more about the idea behind Freak Show?
Z: The people seen in Freak Show are insulated from the world. They enjoy the sun through layers of protective clothing, their food is a processed white mush. Even sex and intimacy are experienced through plastic respirators. It’s a fun dystopian nightmare where the synthetic has entirely replaced the organic.

You’ve shot part of Freak Show in China, and also in the UK. Wasn’t the whole shoot supposed to
take place in China? What prevented that happening?
Z: As a Western crew we drew an awful lot of attention. With gas masks and dystopian posters thrown into the mix we started to gather pretty big crowds. We probably shouldn’t have been surprised when the police turned up and deemed the material ’not for the glory of China’. Things kept escalating and before long Katie [Lambert, Z+K's producer at Agile Films] and I were in custody. Knight and our DOP hot-footed it to the airport.

"As a Western crew we drew an awful lot of attention." Linden Feng (top right) on the Freak Show shoot in China

Even though we were finally released, we had spent so many days in police custody that the prospect of shooting the remainder of the video in China felt unpalatable to say the least. So we had to re-conceive the entire idea on a nine hour plane journey.

K: I had no idea what was going on. I knew nothing. I had the hard-drive of footage in my bag and was waiting to call the embassy/get on a plane.

What’s next on the agenda?
Z: We’d love to make something funny next. Still bleak and harrowing of course (someone will probably suffocate in toxic fumes), but it’ll be done in a light-hearted, fun way.

How would you describe this year, in a few words?
K: I’m looking into getting us burner passports.

Where do you hope to be, and what do you hope to be doing, in four or five years time?
Z: Our endgame is to make public warning adverts. Something nasty like syphilis or herpes would be great. But of course we’re always open to other subjects such as drink driving or child obesity.

UK Music Video Awards 2017: Newcomer Awards winners of 2016 on what they have done in the past year

The third episode of the Silent Spaces music series, in which composer/performer Soumik …

ENNY eloquently stands up for women who have been silenced, in KC Locke's powerful black and white …

Alan Resnick and Patti Harrison's latest work for SASAMI takes a dark turn and no one is safe, not …