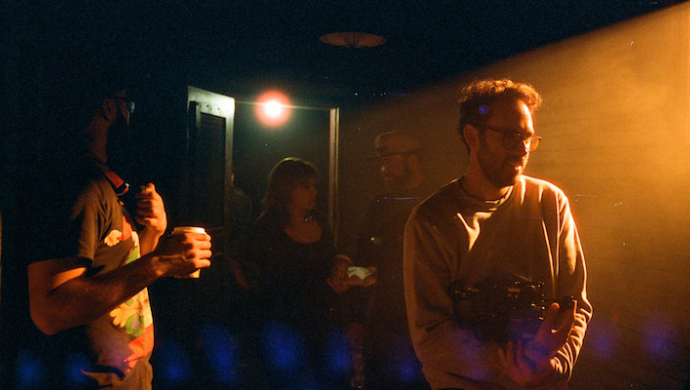 Tomás Whitmore is no stranger to big ideas. Whether it’s getting Mø to float supernaturally in a rocky desert, or constructing some dizzying and seemingly impossible long takes with Snakehips, his aesthetic flair is one of assured cinematic sensibility.

His video for The Hamilton Mixtape's Immigrants (We Get The Job Done) performed by K'Naan and featuring Residente, Riz MC & Snow Tha Product – which came out in June, was nominated at the recent UKMVAs and an award-winner at this year's MTV Video Music Awards –  is no exception. But in this case, Whitmore combined his love of strong visual motifs with wonderfully measured political discourse.

What begins as a train carrying tired and anxious refugees on a journey with an unknown destination becomes the setting for a series of busy workplaces where these travellers become crucial cogs in the American economic machine - garment workers, butchers and fruit pickers, hospital staff, and so on. Then on a subway train 'illegals' gain identity-concealing black bands on their eyes, symbolically removed by Riz Ahmed. Later the train becomes a warzone, and then raided by the police, turning into a place of incarceration - a metaphor for the immigrants journey, hopes, fears, reality and nightmare.

We wanted to know a little bit more about how the Immigrants video came into being, so we tracked down Tomás. He told us all about incorporating ideas from Robert Rodriguez into his own work, finding a production designer’s dream location, and how a short scene from a 1931 movie featuring screen legend Joan Crawford inspired the video in the first place.

LB: How did you come to be involved in the project?

TW: As soon as I heard the track I got involved. It was impossible not to. The lovely Doug Klinger, who had just come on board as my US rep at Reprobates sent the project over, so a hat tip to him. The brief was an open-ended invitation for directors to listen to the song and see what it elicited. I appreciated the label's decision to let the music speak for itself.

I only had a night to work out my idea, so I decided the best thing to do was to make a video treatment cut to the music. Lin [-Manuel Miranda, composer, writer and lead actor of the musical Hamilton] was extremely busy at the time making a movie, so the elevator pitch paid dividends in the long run. The immediate response from everyone it was positive, but sadly the excitement I felt from the pitch waned as the project fell into silence.

"As I began to work out the details, the idea really started to click, the medium became the message. Here we are, on this age-old train of movement and migration." - Tomás Whitmore (above left, with producer Melora Donoghue)

Then, nearly two months later, I got a phone call explaining that the project had disappeared because Robert Rodriguez and Lin had been talking about making the video together. Robert had a whole idea he had put together, but was unable to make it work with his schedule. So now our idea was the front runner, but the only caveat was that we needed to incorporate elements of Robert's idea into our concept. How could you say no to that offer? Thus, the integration of censorship bars in the NY Subway scene came to be. It was a beautiful scenario of melding concepts, and creating a stronger finished product. Seeing Riz rip that bar off his face and emerge from the shadows is one of my favorite moments in the film!

With Hamilton itself being a phenomenon in musical theatre, were you at all worried about employing a more cinematic sensibility?

I wasn't worried, but I was extremely sensitive to the matter. The story is important and it deserves a cinematic approach. The whole ethos of the project is to honour the heart and soul of the immigrant experience, so it had to carry weight. That was the word I kept coming back to in my conversations with my DP Drew Bienemann. In the end we agreed to root the visuals in shadows, a simple, yet strong representation of the immigrant experience.

"The first big win came when our producers found an incredible train yard that had over 50 trains in it."

Speaking of cinematic sensibility - can you go into some detail about some of the films that influenced the work? In my article at the time the video was released I compared it to Bong Joon-ho’s Snowpiercer - was I right, or way off?

To make a film and have it compared to any of Bong Joon-ho's work is a huge compliment, but surprisingly Snowpiercer didn't cross my mind during the pitching processes. The influence came from the train scene in Possessed. I love that scene. It captures so much about life, and it inspired the development of Immigrants immensely.

As I began to work out the details, the idea really started to click, the medium became the message. Here we are, on this age-old train of movement/migration. Suddenly the film became a history of humanity, the movement of people, this never-ending journey. That was the idea that motivated the end shot of a world covered in trains.

Talk me through the production design on this video. It feels like it takes place almost in an endlessly transforming tunnel, and I wondered what the logistics of shooting that were like.

The logistics were wild: four artists, three shoot days, two cities, 10 sets, and a 40-plus cast. The first big win came when our producers, Kimberley Stuckwisch and Melora Donoghue, found an incredible train yard that had over 50 trains in it. From a production design standpoint we had already struck gold. We had trains from every era, in different states of despair, with the kind of texture that only comes from years of use.

"The whole ethos of the project is to honour the heart and soul of the immigrant experience, so it had to carry weight."

Once we knew where we were filming, the only mandate was to infuse authenticity into every decision. To keep us rooted in our decision making we spent a lot of time revisiting news stories and pouring over the work of photojournalists. Spencer Graves [the production designer) and his team did an incredible job at building the worlds, allowing us to be in the spaces while we weren't shooting, to walk around them, to sit and imagine what the movement in them would feel like.

When the clip first came out, you mentioned that the video was a transformative experience - can you talk a little bit about your experience telling these migrant stories and why it meant so much to you?

Arriving on set and seeing every single person on the crew working with so much intention was a special feeling. It was so clear in everyone’s demeanour that they were there for a reason, that they were passionate about the project. Everyone approached their work with such care and honour. It meant a lot because a large part of our cast were immigrants, because my family has its own struggles with immigration, and because there are people going through hell at this moment, all in search of a better life.

"Arriving on set and seeing every single person on the crew working with so much intention was a special feeling."

The most rewarding part of this process has been the response it’s gotten. When we screened the film for the cast and crew, there were countless stories shared that night of personal experience. Stories of people screening the film for their families who had immigrated. To hear people say that the project filled them with pride has been the greatest compliment.

Were there any scenes from the shoot that you’d like to revisit, now that you’ve had a few months to reflect on the finished product?

In terms of what's in the final edit, there's nothing I would change. There is however one scene that got cut that I'm still a bit perplexed by. The scene takes place at an anti-immigration rally, in which the Syrian father, holding his son tightly, has reached the end of his journey towards a better life only to be greeted by hatred. The problem with the scene was that we portrayed the anti-immigrant rally via caricatures rather than fully formed characters. If I could go back I would redirect the scene to reflect America's racism/xenophobia how it actually permeates; bubbling just beneath the surface.

In the end we decided the film was a celebration of the migrant story, and that to include the anti-immigrant sentiment as we had portrayed it would give outlets like FOX the license to write slanderous headlines about the project. And who knows, even if the scene had been directed differently, it could've still been destined for the trash bin.

"The most rewarding part of this process has been the response. To hear people say that the project filled them with pride has been the greatest compliment." - Whitmore (front, with cast and crew on set of Immigrants)

What was it like to have Robert Rodriguez and Lin-Manuel Miranda as executive producers on this one? How involved were they?

Surreal and surprisingly easy. We didn't communicate prior to the shoot, which I took as a strong vote of confidence on their ends, but the two got involved once post began. The biggest note discussed was the aforementioned anti-immigrant rally scene, and it was fascinating to hear Lin, who's obviously no stranger to scrutiny and news headlines, rationalize the decision to cut it.

It was reassuring to have their collective expertise and experience in our corner, but also a big boost in confidence to hear how little they felt needed to change.

An ominous presence tracks a number of individuals on the streets and fields of East London, in …

Jackson Ducasse creates a parodic pseudo-documentary take on the rockumentary genre, set to the …