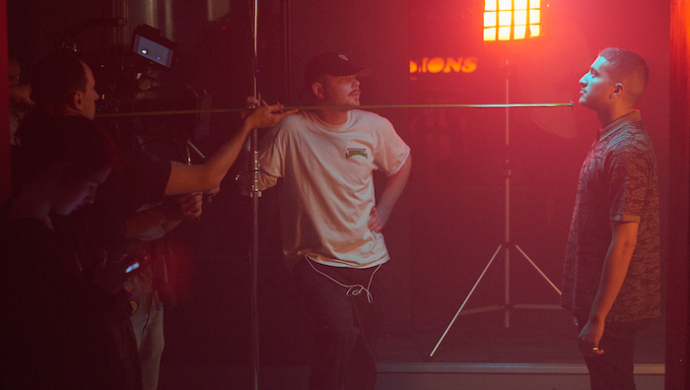 Taz Tron Delix is a director that seems to have exploded out of obscurity in the last 12 months. His mind-bending, multi-layered mixed-media collages are a rich tapestry of sometimes-dark, often-dreamlike imagery that really manages to stick in the dark recesses of your mind.

Two videos he directed, for Oscar Worldpeace and Cartae, are nominated for Best Video - Newcomer awards at the UKMVAs this year. But that's almost the tip of the iceberg of what this prolific as well as visually inventive director has created recently, including two videos for indie rock tyro Declan McKenna (Brazil and Humungous), and a nightmarishly surreal work for Strangelove. And his latest, for JD Reid ft. Novelist's Ready has just been released.

So we decided it was high time we sat down with Taz and take a look what makes him tick.

Promonews: Hi Taz, where are you from?

When did you start making films?

I've been making animations since I was 16 then moved into live action about 3 years ago, because of my background in animation i've always been experimenting and manipulating footage from the beginning trying to use it as a tool to penetrate the viewer subconscious mind.

How long have you been Taz Tron Delix?

I started rolling with a London underground art cult about six years ago called Holy Delix 169, with the great musician and my homie Lord Catpiss aka Onoe Caponoe. That's when the TRON DELIX was born.

"I just have loads of ideas and things I want to try, I want to do it all and cram pack it all in for a super intense experience that grabs your attention for the duration of the film”

With your videos feeling like a stream-of-conscious explosion of ideas, what does the pre-production phase look like to you? How much do you plan and how much do you leave to chance?

In pre-production, its always begins the same: lots of research of images and piecing together mood boards. I get a lot of inspiration from paintings and collages and like to imagine how they would move and come to life on set.

As the process moves on I will start to work out what scenes and shots we would like to capture to sculpt the narrative or joinery of the film, but I don't like every single little detail set in stone. I want to leave room to play. I always find something interesting happens when you leave enough space for the film to grow and take its own life, keeping the creative process exciting as the film takes shape and forms its own voice.

I also like to keep all possibilities open when it come to the edit. This is definitely when the stream-of-conscious comes into play again.

Your work spans seemingly every digital and analogue format possible - what’s your favourite and why?

That’s a hard one, I like them all for different things but I love imperfections and character. So, I would have to say 16mm, I’m sure this will keep changing, haha…

How closely did you work with Declan McKenna to build the visual world in which your videos for him occupy?

With the first collaboration with Declan [for Brazil], I think because he made this song such a long time ago he wanted me to go wild, push the boundaries and bring new life and meaning to the song for him. So he sent me loads of music videos he was digging, including the film The Lux, and an Oscar Worldpeace video I made.

From these references, three things where very clear; we both had the same tastes in aesthetics and experimentation videos, especially retro-futurism. Secondly, the video had to capture imaginations and inspire its audience. The last, but most important, thing was that we had to care about the message in the music and the philosophy that Declan embodies. This had to be delivered in his music in a clever and charismatic way.

At the time, I was mad inspired by collage artwork and films. Looking back, it's quite interesting because the first film I made at 16 was a stop-motion collage, so this was a chance to go straight back to my old playful self, but this time have the knowledge, skills and the tools to achieve whatever my mind wanted.

This format worked so well we wanted to carry on the saga for Humongous. This time me and Declan had a few phone calls throwing ideas around as he explained the thoughts behind this song. In the video, he wanted something to reflect the digital internet age and the things going on in the here and now that can make us all feel so lonely in this mad, mad world we call home.

There’s a huge variety of imagery in your videos - Strangelove’s video in particular looked like a huge undertaking. How do you manage to stay so prolific when the projects feel so broad in scope?

I just have loads of ideas and things I want to try, I want to do it all and cram pack it all in for a super-intense experience that grabs your attention for the duration of the film. I see things a specific way and I guess that's just me!

Your video for Strangelove is considerably darker than a lot of your previous work - with a very paranoid edge to it. Did you approach this video any differently to how you’d normally approach a project?

Strangelove, is definitely the darkest piece I’ve made to date. When approaching all my promo projects I find it very important to embody the artists’ vibrations and persona in the film. This lays a foundation for me and dictates the direction of the video’s tone, setting and the world it belongs to.

So, pre-production processes stay the same but the research matter changes. And after having a few meetings with the group it was very clear we were all drawn to the darkness and isolation of life and how many people could live in such close proximity, but live in completely different worlds.

We wanted to approach the filming like producing music – by shooting/collecting footage over a three-day period then arrange all our samples on the timeline, and let the story unravel in the editing. Personally, I love making and watching dark material so this project was a great excuse to connect with that side of my own personality and I look forward to having more opportunity to explore and dive deep into this side of me.

How do you feel your style has evolved over the past year or so as your surreal collages have morphed into much more hallucinatory, atmospheric experiences?

I feel my style is always evolving as I absorb the world around me, I like to just focus on pushing boundaries and challenging myself with new ways of thinking and playing. Naturally, as I’m exploring different waves and patterns of behaviour, my work will change, morph into something new that reflects and connects with me in that moment in time.

"When approaching all my promo projects I find it very important to embody the artists’ vibrations and persona in the film.”

Your latest is JD Reid ft Novelist's Ready, shot by DoP Ruben Woodin Dechamps on 16mm. How did the pair of you approach this shoot, and working with film, knowing full well that you’d be manipulating the footage after the fact?

Shooting on film for us film-heads is almost like some kind of religious ceremony that must
be honoured and respected at all times. It literally chews up money with each frame, but puts out a wonderful product, so we both felt we wanted to find a balance between the styles and let the 16mm footage shine through with the post and not get buried under the VFX and digital manipulation.

Also, it was important to us that we could have a small crew and strip back to a lightweight setup to capture the energy and dynamic of a buzzing London city.

• Taz Tron Delix is represented for music videos and commercials by COMPULSORY.