Q&A: Daps on working with Migos and Stormzy, and adding a twist to the mainstream 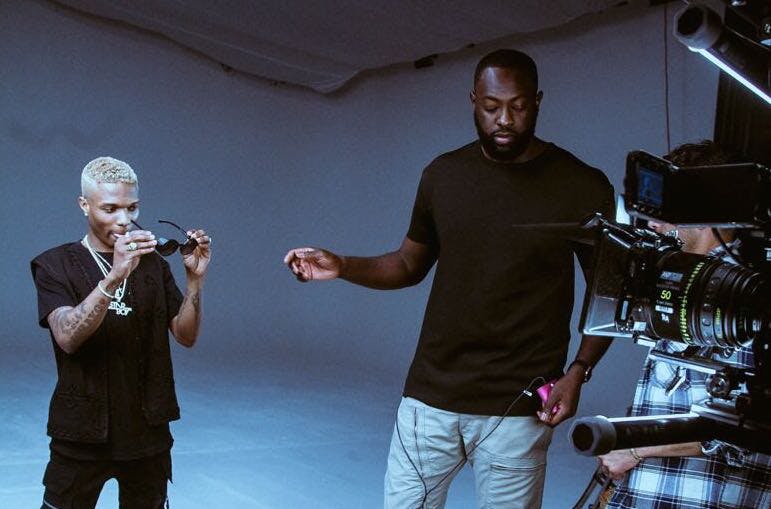 2017 is panning out to be big year for Daps. His ongoing association with Atlanta superstar rappers Migoshas thrust him into the front rank of hip hop video directors in the US. And now his video for Migos's Bad And Boujee is now up a Best Music Video prize at the 2017 BET Awards this month.

But the towering Nigerian-born director (above, right) also has a foot in London too, working wth grime king Stormzy among others on this side of the pond. So we thought it was time for a quick catch-up and find out more about Daps...

What’s your background, when did you start directing? And what’s your real name?
My legal name is Oladapo Fagbenle, but I’ve been called Daps since I was born. I started directing in 2013. Prior to that I was producing videos so that’s where I learned everything.

In the past year you’ve directed all of Migos’s music videos. What’s the key to your relationship with them?
It’s more than business - we’re cool in real life. Creatively, we just merge. I liked their music prior to meeting them and they bring crazy energy to the scenes. Similar to how I’m cool with Wizkid, Davido, or Stormzy in real life. Everyone I direct videos for, it’s easier when you have a rapport with the artist.

The Bad & Boujee video put a different, somewhat tongue-in-cheek spin on hiphop aspiration, and now has become something of a phenomenon. What was the inspiration for the video?
It’s crazy how big it’s become. I love putting juxtapositions in my videos so I knew I wanted to do that with Bad & Boujee. The video is basically the title: Bad (good looking women) and Boujee (affluent, proper, or even stuck up). So I inserted those women into environments you’d never find them in – but had them acting perfectly normal in those environments.

​Now the video is nominated at the BETs in June. Will you be attending the ceremony? And do you fancy your chances?
I’ll be there, ha! Well we’re up against some big time videos but hopefully we can pull it off.

You co-directed the T-shirt video with Quavo from the band. How did that work in practice? What did he bring to that role? Where did you shoot it, and did the snow and ice make it a more challenging experience than normal?
That video was shot in Lake Tahoe, California. Quavo initially proposed a video involving snow and ice, and I then transformed that into a play on the movie The Revenant. The film is based on people that kill animals for fur. The technical name for those people are “trappers”. Migos are “trap” artists. So the whole video is an alternative trap universe. The snow is the drugs, the bows and arrows are the weapons. Trap rappers wearing trapper outfits while trapping.

The snow was a workout! Trudging equipment through all that. And the cold made it difficult too but it was well worth it.

You’ve also worked in the UK in the past year, with Stormzy. How different an experience is it working in the UK compared to the US?
The biggest difference in working in the UK is that the weather is never definite, ha ha. Other than that, I think the US is more suited and used to lavish street videos. But I like working in both.

Having being born (and lived) in Nigeria, growing up in London, living in America – it’s a blessing and unique position artistically. I understand cultures from all three places. So it enables me to work with a 2 Chainz, and a Stormzy and an Afrobeats artist whilst really understanding where they’re coming from.

Is the latest Migos video for Slippery a return to a more old school hiphop video style?
The main parts of the video were shot at Quavo’s birthday party, so it was great to pick up that real life footage. The video can be seen as a nod to the hiphop videos of yesteryear, but I still do my best to add my flavour in there. The composed shots, the gazing into the camera, etc.

What’s do you think is the most important thing you need to make a good or great hiphop video these days?
You need to be able to differentiate yourself from the typical while not going too far left. You can’t lose the audience – they like what they like. But the trick is give them what they’re used to seeing but adding some sort of twist to it.