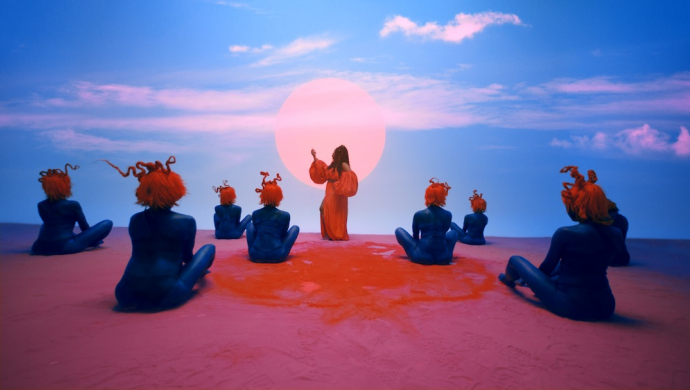 Amsterdam-based Lisette Donkersloot has directed the first two music videos for singer-songwriter NAO's new album And Then Life Was Beautiful, which showcase the singer-songwriter's celestial voice through stylised and very colourful worlds.

In Messy Love, NAO presides over a studio desert populated by extraordinary blue-skinnned, red-haired dancers; and in Wait, naked bodies become islands in an inky expanse of black water.

We spoke to Donkersloot about the two videos, her creative collaborators, and the huge challenges that came with the projects. We discovered that one job went according to plan; the other one... not so much. Both of them provided a real learning curve for this talented young director - which she discusses frankly here.

The two videos appear to be connected in terms of style and art direction. Did you work on ideas for both videos at the same time, or one after another?

Yes I did. I received a double brief to work on treatments for both songs simultaneously. I was instantly in love with both songs, and determined to get this one in.

NAO mentioned she loves a theme throughout and I love some sort of cohesion myself. So it was intentional to give both videos some slight visual connection whilst remaining to be separate stand alone pieces as well.

Did you learn anything about NAO from her previous videos that helped when it came to writing the treatments?

I’ve been listening to her music - and inevitably watching her videos - for such a long time. However I don’t tend to look back on previous stuff. The songs themselves and her new album's artwork inspired me so much, which brought the ideas easily to life.

The bold use of colour is a hallmark of your work, and an important element in these videos. When do you start thinking about the colour palette for a video?

I naturally think in Technicolor. When I start brainstorming and images pop up in my head they arise in a certain colour scheme from the minute they enter my brain. Most of the time I stick to that.

In the treatment... I described NAO as Ganga, the river goddess of fertility and life.

How did you decide on your approach of a studio-based performance for Messy Love?

In all honesty that was more of a budget-led decision.The initial plan was to shoot outdoors in a specific landscape. But when I first heard the songs I immediately pictured dancers and knew it had to be a choreo-focussed video. Also we had a very quick turnaround to produce both videos, so no time to scout properly nor the budget to travel crew, dancers and artist far out of London.

Obviously the dancers are such an important part of the video – how did you describe them in the treatment, and their relationship to NAO? Was that the main ‘selling point’ of the treatment?

In the treatment I described them as 'otherworldly figures or magical creatures', and NAO as Ganga, the river goddess of fertility and life. In the original plan there was supposed to be a river stream within the set which I had to kill unfortunately. I think the oversaturated colour scheme in combination with the dancers was the main selling point to NAO.

When I heard Messy Love I knew it had to be a choreo-focussed video.

You brought Shay Latukolan on board for the video. When have you worked with him before, and what did he bring to this project?

I can’t stretch how amazing Shay is. We met during one of my first music video shoots back in the day where he was one of the dancers. I’ve known him for like six years now. I truly think he’s one of the best in the industry, so I knew instantly I wanted him on this project as I knew he would kill it.

I had bulletpoint ideas of where I wanted to go with the choreo, but his style is just so unique. The way he makes bodies move is very intuitive but unexpected at the same time. So I wanted his vision and signature to come through as well. Apart from his individual style he always brings a high level of professionalism and a great, infinite energy.

Why is Shay described as ‘movement director’ in the credits, rather than ‘choreographer’?

Because he is so much more than a choreographer. We worked very closely on this video and Shay had great input on camera movement here as well, in order to get his choreo across in the best way. Also he is the one who put together the amazing ensemble of eight female dancers.

From the beginning I imagined the dancers to be fully body-painted.

What was your inspiration for the dancers’ amazing look/design? And how did this look/design evolve once you went into production?

One of the inspirations was infrared photography and over-saturation. I wanted to make them look otherworldly in a bold colour scheme. So from the very beginning I already envisioned them fully body-painted in this deep indigo blue with blood orange hair.

However the hairstyle changed a bit. At first I wanted short pixie cuts, but I felt it wasn’t otherworldly enough, so started exploring more gravity-defying hairdos which also led me to the work of Shamara Roper who made the hair sculptures (as I like to call it) for the dancers. She’s is just so creative. She really is a sculptress who uses hair as her medium.

How long did it take to apply the dancers’ SFX makeup and hair styles, and did that impact on your shooting schedule?

We had an amazing creative on board for the body art - Victoria Guggenheim. She is exceptional and was so well prepared. It was supposed to take thirty minutes per dancer, but there were external factors that caused delay which totally sabotaged our strict and precise planning up front.

So it did end up having a major impact on the shooting schedule. But I actually still feel bad for her as it made her rush her make-up art on the bodies which was just very frustrating and very much out of her control. It was a series of unfortunate events.

What were the other challenges of the shoot day?

There were a LOT. Let’s just keep it at that. We ended up having only four and a half hours to shoot everything. Total madness.

Above: Lisette Donkersloot on set: "I knew my ideas were bigger than the budget [but] I thought I could make it work."

How did you develop the idea for the Wait video? And how did the ideas evolve during the production?

I was inspired by a 1970’s book cover from sci-fi writer Howard Fast, in which body parts are disproportioned to surrealistic scale. I wanted to do something similar for this video - play around with scale to create and reveal a surrealistic dreamscape through a slow-paced one take.

During production this didn’t change much. But on the shoot day I had to flip my plans 180 and was not able to shoot anything how I anticipated.

How much of the island/black water effect was created in-camera? Or is it achieved in post-production?

Pretty much all of those effects were done in camera. Except for the shot with NAO’s head emerging from the water. It was planned to do that in camera but ended up having to be fixed in post.

What were the challenges of the shoot? The shots are obviously very considered, so how long did it take to set them up and shoot?

In all honesty, we had a very considered shotlist and camera choreo with timings carefully thought out to make a compelling one-take in which we would establish each body part individually one by one. No cutting back to anything - and there would have the big reveal at the end where everything would come together as this landscape of body parts. None of that was shot according to plan.

It was also planned to be much more three-dimensional, but there were a lot of setbacks and struggles on the day, so I had to improvise and come up with a back-up plan.

We had to make things work in post, which was quite the challenge.

Was this a more challenging shoot for NAO?

Yes I think so. Both of them where actually very challenging, but for Messy Love we had the dancers which gave her a lot of energy and support on the day. For Wait she was performing more in solitude.

What were the challenges of the post production process?

Well my original plan was off the table. So we had to come up with all the solutions to make things work in post which was quite the challenge. The flower island originally had a much smaller part in the video and wasn’t supposed to be introduced until halfway of the song. But those shots and set-up came the closest to the original idea in comparison to the rest, so I decided to make the flower island the focal point of the video in the edit.

My biggest takeaway? Acknowledge the budget and its restrictions at the beginning of the process.

What is the biggest takeaway – or what have you learned – from making the two NAO videos?

My biggest lesson is to acknowledge the budget and its restrictions at the beginning of the process. I knew my ideas were (much) bigger than the budget. But this being my first job coming out of lockdown I felt really optimistic and excited. I thought I could push for everything and just make it work.

But we ran into so many obstacles and struggles during prep, but mostly during the shooting days, as I simply wanted too much for what we had. I learned that the hard way.

Charles Mehling on directing The Rolling Stones' Living In The Heart Of Love. "Things became more raunchy and rebellious."

LEAP, longstanding partners of the UK Music Video Awards, have announced that they are sponsoring the award for Best VFX in a Video at the UKMVAs21.