Léo of Megaforce on Rihanna's BBHMM video: "I'd lie if I said it was easy" 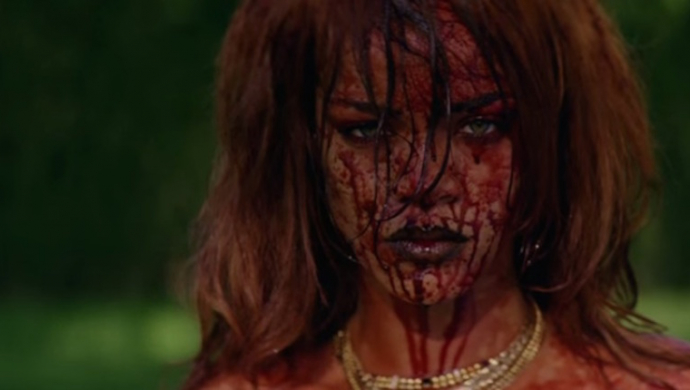 It's the most controversial music video of the year so far, and this revenge fantasy with explicit violence, gratuitous nudity, and a wicked sense of humour has provoked wildly contrasting views and heated debate. What's unarguable is that the Bitch Better Have My Money video sees Rihanna break ground in embracing narrative and acting in her videos, and sees French directing team Megaforce break ground in working with a pop star as high-profile as Rihanna - who is credited as co-director.

We had a chance to ask Léo Berne - one of the four members of Megaforce, with Charles Brisgand, Raphaël Rodriguez and Clément Gallet – a few questions about the process of making the video for Bitch Better Have My Money; on working with Rihanna; and also on casting top actor Mads Mikkelsen as the Bitch...

PROMO: How did this collaboration with Rihanna happen?

Léo: We got a brief in end of January telling us that Rihanna was willing to do a cinematic video about her kidnapping the wife of some guy who owes her money. The basic structure was there. From this starting point, we wrote a treatment to share fresh ideas and give an overview about how we would like to treat it. Some other directors were still in the running [at that point] but after some rounds she finally decided to go for us.

How do you feel about her having a co-directing credit on the video?

Like “art“, “love“ and “cheating“, it’s a word that can have a different meaning for anyone using it. It was an intense collaboration and she was super-involved at many levels. Whatever it’s called, it’s fine for us.

What were the biggest challenges in making the video?

Finding the freedom zone that lies at the intersection of our respective creative circles. Shooting so many scenes in so many locations in a short amount of time with the usual inertia that comes with shooting big stars.

"Instead of kidnapping her, we thought Rihanna could invite her to tea."

Did you have Mads Mikkelson in mind to play 'the Bitch' from early on?

We didn’t even dare hope having him, but we probably underestimated Rihanna’s power of attraction.

How pleased are you with how it's turned out?

Considering all the challenges inherent in projects for artists of that scale, we’re pretty happy of the result.

The video has been greeted with a predictable furore. What would you say to criticism that it goes too far in its depictions of sexualised violence, bondage, torture, etc.?

Instead of having a woman kidnapped, we thought about having the guy’s boyfriend snatched but someone said justly that it could been taken as homophobic. So we then thought about kidnapping his dog but here again this could have been offensive. We then explored the idea of having a neutral character, based on those yellow emojis characters but some weird guy told us that it was racist against Asian people somehow.

So we understood that the problem wasn’t the hostage but the kidnapping itself! So we went back to the wife, but instead of kidnapping her, we thought Rihanna could invite her to tea.

We then realized that it didn’t match the lyrics of the song anymore so we proposed Rihanna to change them. So the title would have been changed into RWWYDST?: Respectable Woman Would You Drink Some Tea?. Unfortunately Rihanna wasn’t open-minded enough for that, so we had to stick to the plan and bear all the critics.

• It seems you’re busy making commercials most of the time. Does it need a big artist like Rihanna to lure you back to videos now?

Our previous video for Brodinski was more indie, wasn’t it? It’s always a big commitment to do a music video – indie or mainstream. When we have the chance to make some money out of it, it’s never big compared to the investment. So we can’t afford do to more than 1 or 2 videos a year unfortunately.

• What's the next thing coming up from Megaforce?

Jake Jelicich makes his welcome return to music videos to direct a high-octane performance promo for Nothing But Thieves.

Luke Lovekin experiences every stage of grief in one evening, in Graham Michael Roberts's …