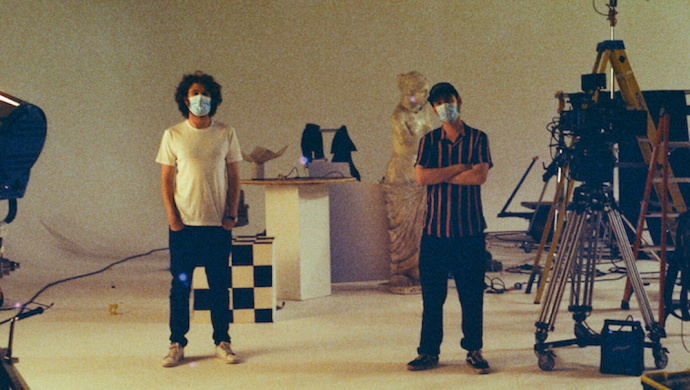 Tom Ringsby and Rhory Danniells have known each other since university days, and having travelled the world in pursuit of their filmmaking careers, they started working together a couple of years ago when they both returned to London. In the past year, they have been laying the foundations for their new company - Intergalactic Studios.

That pandemic-ravaged year was spent gathering some of their favourite creative talents into a visual content company working across different media, styles and skillsets, and producing videos with them in the new normal. Their first promo releases of this year already promise great things - a live performance extravaganza directed by Ja Humby for London funk outfit Franc Moody as well as a blistering set for alternative rockers Shame. Both out later this month.

We caught up with Tom (above right) and Rhory (left) for a chat about Intergalactic - and learnt how they turned 2020’s challenges into advantages.

As directors and producers ourselves, we know exactly what we’re looking for in a production company.

What is Intergalactic and what do you do?

Tom: Intergalactic is a 360˚ visual content studio working across film, photography and animation to create director-driven work that's out of this world. We match-make artists, songs and brands with unique creative voices and visions, then nurture their dreams into reality.

Rhory: Our primary focus is music videos, commercials and branded content, though running alongside our film and video department we’ve got an awesome still photography roster and regularly work with animators, illustrators, graphic designers and other visual artists - sometimes all at once. So we're looking forward to expanding that side of our universe.

Above: King Krule 'Live On The Moon' by Ja Humby

What brought you together? What was your first collaboration? What were you doing before you started Intergalactic?

Tom: Rhory and I met at Bournemouth Arts Uni about ten years ago where we quickly bonded over our matching Director’s Label boxsets and nocturnal habits. We both worked abroad for a few years, Rhory on commercials and promos in Seoul and myself in the music and fashion scene in Cape Town, before reuniting in London and creating our own film hub that has now grown into a production company.

We quickly bonded over our matching Director’s Label boxsets and nocturnal habits.

What were the main reasons and intentions behind starting Intergalactic?

Rhory: To unite our favourite visual artists in an official way; we’ve been creating and overlapping with each other for years. As directors and producers ourselves, we know exactly what we’re looking for in a production company, which makes us better equipped to build one that values creativity above all else.

Tom: The landscape of creative work is changing. Diffusing the borders between agency, studio and production company means we can adapt to each project’s needs, regardless of medium or platform.

Rhory: Several of our directors have features and series projects in production, so Intergalactic will be a place where they can stretch their creative muscles on music videos, commercials and branded content.

What has been your main focus since the formation of the company?

Rhory: Talking with our creatives, and making sure we know what path everyone is on, so we can support their journey. Reaching out to our favourite commissioners, agencies, labels and artists. Letting the world know we’re here and hungry!

Tom: The scale of projects this year has had to be contained of course, and ideas needed to fit with the restrictions. But we’ve adapted with the world and it feels good to know we are still able to safely pull off projects with full crews and big set builds. Ultimately, the main focus will always be to make great work that we’re proud to call an Intergalactic Studios production.

All the creatives we rep are multi-hyphenates donning different hats in various mediums.

What are your next music-based releases?

Rhory: We’ve just finished a couple half-hour shows for two of our favourite UK acts by director Ja Humby as part of our ongoing collaboration with him and his Molten Jets series. With others already in the pipeline we are on a mission to keep music live and surreal in 2021.

Tom: These shoots have actually been the only opportunity we’ve had to see gigs since March, so they’ve definitely been highlights.

Above: Novelist 'One Sec' by Simon Halsall

Who are the directors on the Intergalactic roster? Can you explain why you were keen to sign each of them?

Tom: Everyone on our roster is someone we feel super excited about. Unique voices with immense talent. When we hear about their next projects we can’t wait to see it. So now we’re in the great position where we get to be part of the fun and help them produce brilliant work.

Rhory: Due to the fluid way we work and the direction we see the creative industries going, a big point for us was that all the creatives we rep are multi-hyphenates donning different hats in various mediums. Between all of us, we’re currently working on a really diverse bunch of projects from feature films and podcasts to animation, photography books – and of course, music videos.

We know first-hand everyone on our roster gives their heart and soul for their projects, whether it’s a music video or a commercial, they’re all passion projects. That sort of shared love for what we do, attention to detail and work ethic is what brought us together.

We interrupt this interview to say a bit more about the Intergalactic Studios roster...

Simon Halsall
Simon’s darkly-tinged visual sensibilities first came to light co-writing and directing (with his brother Matt) the breakout short film If I Had A Heart, and the limited series 100 Bullets: Dead Ghosts, before making promos for artists including Novelist and Jamie xx.

Simon is in post-production on a feature documentary he has directed with Intermission Films. He is also currently financing a feature-length horror film as a writer-director with Cowboy Cosmonaut.

Matt Halsall
After making short films and promos for artists like Darkstar and Lil Silva, Matt captured Hollywood’s attention and is shooting his debut feature film Yokai with Spyglass Entertainment this year. He also just sold another feature script due to star Korean actor Don Lee (Eternals, Train to Busan). He is part of Intergalactic’s Korean connection and is available for music videos and commercials set in his home in Seoul, South Korea.

Minha Kim
Minha came to London from South Korea to attend the National Film and Television School where she went on to make award-winning short films leading to her securing representation by Casarotto Ramsay & Associates. Since graduating, Minha has moved from animation to live-action, writing and directing international commercial work as well as the calling-card short film A Perfect Turn, which secured a feature film development deal with Film4.

Ja Humby
Ja’s striking performances are the reason his work has been featured in Vogue, Vice, GQ and Hypebeast. Ja brings new life to the live-performance genre and takes it to the next level by erasing the lines between music video and live concert. Ja has been back in action in 2020 and has several more video offerings as part of his Molten Jets series.

Rhory Danniells
Rhory started out as a high-concept comedy director through a string of surreal music videos. After a stint directing and producing promo and commercial content in South Korea, Rhory returned to London where he continues to balance off-beat music videos with award-winning advertising work. Rhory’s role as a producer has allowed him to collaborate with all the directors on the roster, laying the foundations for what is now Intergalactic Studios.

Tom Ringsby
Tom’s roots are in music documentaries and portrait photography. Progressing into promos through working with artists across the UK, South-Africa and Scandinavia. Tom has amassed a naturalistic, personal and convention-breaking body of work through longstanding relationships with a diverse array of artists, subjects and collaborators.

And now, back to talking to Tom and Rhory...

What were the main challenges of starting the company in the year of the pandemic?

Rhory: At first it was actually more of an advantage than a challenge. Tom and I went into this year knowing we wanted to carve out time to start Intergalactic so the first lockdown in March and the subsequent postponed projects finally gave us the chance to focus on building it properly (shout out to our man Collin with the web developing skills).

Tom: Launching a studio during a global pandemic was a bit of a rogue move, but what we achieved in those first months would definitely have taken much longer under normal circumstances and allowed us to map out our plan for the future.

Diffusing the borders between agency, studio and production company means we can adapt to each project’s needs.

What are your hopes and objectives for the company? Where do you see Intergalactic heading in the future?

Rhory: Hopefully, we’re not still locked inside! We want to be out there creating again as much as possible, expand our footing into all forms of content, then blur the boundaries between them. Our goal is to work between platforms, genres and mediums.

Tom: We want to connect our creatives with clients and briefs to make work that inspires infinite re-watches and double-takes. More 360˚ projects collaborating with artists on artwork, photography, live visuals, BTS-coverage and whatever else to create experiences that live beyond the screen.

This year our main goal is to collaborate with more of our favourite artists, labels and commissioners, and growing our creative family through making bigger and better work - at a safe distance of course.