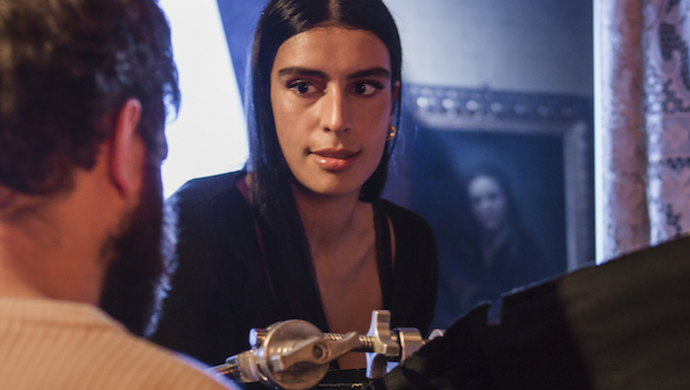 After taking home two awards at the 2016 UKMVAs, Ian Pons Jewell has had a quiet year where music videos are concerned.  If it seems like he has dropped off the map, don't worry - he's just been taking care of business. He's directed over a dozen commercials in the past 18 months. But finally, as 2017 drew to a close there was at last, a new Ian Pons Jewell-directed music video was released - a knockout punch of cinematic surrealism for Sevdaliza's Hear My Pain Heal.

Ian Pons Jewell is a whirlwind - it's hard to know where he is going to be at any given time – but we managed to pin him down for long enough to answer our questions about the Sevdaliza video (above), his eventful 2017, the progress of his career and, frank and fearless as ever, he told us about about weird synchronicity at play in making the video.

LB: It’s been over a year since your last music video. So what have you been up to?

IPJ: Busy doing paid work... just kidding, sort of. I started doing commercials halfway through last year and it caught alight. The projects came in one after the other to the point I was working back to back, often with overlap. So, I just didn't have any time to do a music video.

Because I'd just broken into that world, I was very conscious of riding the momentum. In your first year, it's make or break. That one project that changes everything is then needed to be built on. Every single project is a potential massive step forward, or even a step back. Now I've got some strong commercials under my belt [that includes his commercials for Pixel 2, TK Maxx and Finish] I can afford to step out of a project or two for personal work, which I consider music videos to be.

"The idea came on the first few listens with eyes closed. I could see the whole video. It's hardly changed since that first moment. I had to make it.” Ian Pons Jewell

It's a weird one as a director. You're constantly evaluating your profile and career on every single project. You see directors you admire going off the radar and drying up. It's an industry that feeds off hype and temporary waves, so you have to make the most of the moment. That was commercials for me the last year and half - but still have a big way to go.

Which commercial you've done this year are you most proud of - the one you think that will stand the test of time?

That's a tough one. I'd have to say Finish. It's the one I feel is the most direct lines from the music video work. But I'm also very proud of the Pixel 2 spot. It was such a mammoth job and an amazing experience.

Since you’ve been away from music promos all year, what was it about the Sevdaliza project that hooked you back in?

Sevdaliza herself. She wrote to me almost two years ago about working together and it just spun from there. She was patient too, so that meant I could slot in the video as soon as me and Mauro Chiarello (DoP) had a free two weeks. Anyway, I'm boring you with constant schedule talk... the track was the main show. It hit me hard. Deeply. The idea came on the first few listens with eyes closed. I could see the whole video. It's hardly changed since that first moment. I had to make it. The thought of it not having a video drove me forward.

I'll fall in love with a track and the need to bring the images to it. It's not just feeling like I could make a great video to it, It's the feeling of tapping into the existing visual that the track has in a subconscious reality. It's as if all music has its visual counterpart out there in the collective unconscious which is then tapped into when the director listens to the music.

Sometimes it's so strong and such a pure reaction to the music that it's an existential process, one that has to be materialised and unified. Music and image. Which is why I've been completely heartbroken when a project that was looking good was cancelled, or a pitch I was so sure of wasn't picked.

When and where did you shoot the Sevdaliza video?

We shot it in March in Milan.

"It's not just feeling like I could make a great video, it's the feeling of tapping into the existing visual that the track has in a subconscious reality."

This video sees the humorous elements of a lot of your previous work take a back seat in favour of a slow-burning, surreal, cinematic meditation. Was this a conscious tonal shift for you?

There was no conscious decision in the tone. The video you see is the physical product of a totally subconscious reaction to the music. But I was very happy to be making this type of video as a lot of my recent work does have that comedic element, but I really don't see myself as a "comedy" guy. I really noticed how people saw my work once I was doing commercials. Comedy scripts make up 75% of the briefs that I get. So, it's certainly something I'm wary of.

Sevdaliza’s previous videos all seem to follow a similar visual language (an opulent setting, performative melancholy and physical transformation) How aware of these motifs were you when creating the world of the video?

I love her previous videos. Emmanuel Adjei's work for her is stunning. I adore his work, and can see we share some similar sensibilities, but there wasn't a conscious decision to add to that body of videos.

Music has a soul that you tap into. It would be interesting to have two directors make a video at the same time for the same track and see what similarities occur. Something that's very particular with Sevdaliza though, is that there's not many artists that I can't remove from their music. I cannot remove her. Every track I've listened to, I see her singing it. I see her as a core character. I tend to do videos without the artist, but with her the whole idea revolved around her personality and the power she holds. This has happened on the previous scripts I've written for her music also.

How would you summarize the relationship between the characters, and what they represent?

I see them all as characters in such need of each other that as soon as one is gone, the entire fabric of their reality rips apart. We are seeing the moment of disarray.

"There's not many artists that I can't remove from their music. I cannot remove her."

The depiction of grief feels both surreal and sincere here and I’ve seen your collaboration with Sevdaliza as "strange synchronous relationship.” Can you elaborate on that a little bit?

It was happening alongside some things in my personal life, emotional loss and difficulty moving forward from it. The process of making this video was a big part of working through it. The relationship with Sevdaliza was just filled with synchronisities, dreams, coincidences. One night I dreamt I was passing my hands over her back as she writhed in pain. I woke from this to a text message from her, which was strange enough as we don't text frequently. I recounted my dream and she told me she'd just seen a specialist doctor about her back pains.

There were other moments like this that just pointed toward two artists working on the same frequency. It really brought back my faith in the artistic process as it was all stuff I'd put to one side in the heavy work load I'd had over that last year.

Why was it important that Sevdaliza appears naked at the end of the video, and did she need much convincing to shoot that scene?

It's just what I saw when I listened to the music. Her naked self wandering into the room with shoes of her dead lover, performing a final swaying dance with his soul. I can't imagine that scene any other way. She was incredibly trusting and had no issue with it as the project was so dear to us both. We had been wanting to make this script for quite some time.

"The thought of it not having a video drove me forward."

Is there anything from the shoot that you couldn’t include or wish you’d done differently?

There's always stuff you wish you have done differently, that's hindsight for you. But nothing that bugs me in any way.

Best of 2017: Promonews' Favourite Music Videos of the Year

Best of 2017: Promonews' Most Viewed Music Videos of the Year