Fred Rowson on Years & Years’ Desire: "Olly's said I can see inside his brain" 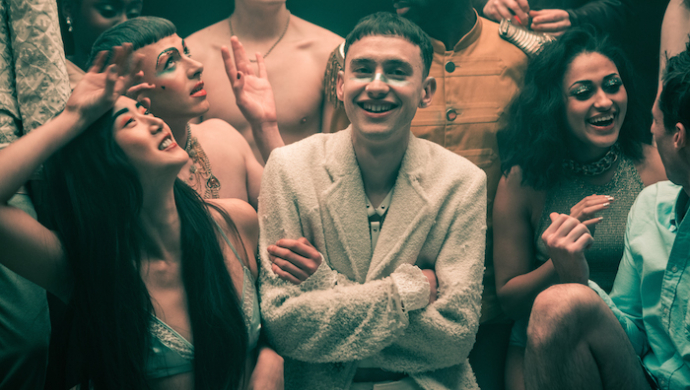 Following their collaborations last year with the video for Foundation, and then the interactive video for Shine, Fred Rowson has now directed his third video for Years & Years - and it's certainly the most controversial.  It's for the new release of Desire, standout track on the outfit's debut album Communion, featuring Swedish singer Tove Lo, and has garnered lots of media attention due to the multiple representation of sexuality in the video - and because lead singer Olly Alexander engages in l'amour à plusieurs with a diverse cast of men and women.

But it's also a proper pop video, with Alexander looking increasingly like a video star in the making. We caught up with Fred Rowson, armed with lots of questions all about it. Photos by R Gershinson

PROMONEWS: This is the second video for Desire. What was the motivation for remaking the video?

Fred Rowson: Everything needed to be new. Years & Years have a voice now that wasn’t quite as established when they released the original Desire, and I know that Olly was keen to do something daring and ambitious with this new campaign. The duet with Tove was really pushing the sexuality in the lyrics. On my part, I wanted to keep an eye on the past – the visual motifs that Years & Years keep returning to – but push them visually to somewhere that was more playful than where they’d previously been. That was my motivation. I wanted to make people smile.

It sounds from the open letter that Olly Alexander released with the new video for Desire, that he wanted to project a new kind of male sexuality on screen in a video. How did you feel about taking up that challenge?

Portraying this kind of sexuality never really felt like a challenge because Olly was so confident in the way he wanted to play it. That said, it did always feel like we were shooting a video that was going to feel very refreshing in the current pop landscape, and it was really gratifying to see that get picked up on when we released, especially in the article that Dazed put up. I was honoured to be a part of it.

You’ve also kept one or two motifs from previous Y&Y videos – namely the characters that surround and touch Olly from the King video (directed by Nadia). Was there a sense of wanting to keep a consistency with previous Y&Y videos?

Years & Years have a repertoire of moods and images that they consistently return to. Whether that’s a set of colours, or a concept like ‘worship’ or ‘voyeurism’. So it wasn’t so much a case of referring back to King specifically as it was playing with the world that they’ve built for themselves. You can spot the hand-on-knee moment from my Foundation video repeated here, alongside the ideas of portals and transition that they established in their early video for Real.

All of these things give you a kind of visual dictionary that lets you play with the viewer’s preconceptions in a way that’s really unique to Years & Years. It’s so much fun.

The art direction, choice of locations and styling feels distinctive but also of a piece with previous Y&Y vids. Where did you shoot it, and how did you arrive at your choices? And where did you find that nice pink overcoat?

My producers will probably agree that I can be very particular when it comes to locations (sorry Amalia and Rob!). I always try to shoot in places that I haven’t seen on screen before. Then when I’m there I try to disguise them even further, and break them down to their most abstract visual parts. It’s something that I pushed to an extreme on my video for Zak Abel’s Wise Enough, and I wanted to bring it back here.

Years & Years are often preoccupied with occult symbolism and ritual patterns drawn on the ground (check out their video for Take Shelter). So in the spirit of taking them somewhere new, whilst still keeping an eye on the past, I wanted to step sideways and find unexpected equivalents of these kinds of imagery. So: a car park in Dagenham and a gym in Peckham. Both shot with very selective angles. My DoP Jake Scott and I spoke a lot about our locations all ‘rhyming’ with each other.

"Our location was an abandoned science laboratory, which was freezing cold, so forget any ideas of it being steamy in there."

As for the colour palette, this is a discussion that have on every job. I love to work with a limited palette, which tells the viewer that they’re being transported to a different world. Here, I coordinated Jake, my art director Lucie Red, Hannah Hopkins, who styled the cast, and Coline Bach, who styled the band, so that everyone was working with non-primaries, and that there was a consistency throughout. The pink coat came out of that, and we have Coline to thank for it!

And who is the woman in costume – who Olly becomes in the end…?

That would be the extremely talented up-and-coming actor Cara Horgan, who spent a long time wearing the heavy head dress. Once Olly put it on, we did have to decide who wore it better…

And so, the sex: in his open letter Olly says: ‘Sex, between two consenting adults can be healthy, positive, safe and enjoyable thing!’ So how pleasurable was it for you to shoot?

It was tough! But not as tough as it was for the cast. We shot it on a ticking clock at the end of the day, with lots of pressure, and our location was an abandoned science laboratory, which was freezing cold, so forget any ideas of it being steamy in there. Plus, the floor was rock hard. But it was fun, too – Jake lit it beautifully, again sticking to the pastel colour palette, so it was joyful to watch the playback unfold.

The scene is notable for the diversity of the participants. How did you go about casting for the scene?

Olly and I shared the view that this couldn’t look like an Abercrombie and Fitch advert. And that we wanted people to be teased, aroused and confused, roughly in that order. So I wanted to take a very gender-fluid approach to casting. I came up with characters – everyone from a cheerleader to a military-priest type – and then had our casting director (the excellent Leanne Flinn) cast each role out to both genders.

Then, during our casting session, we held open discussions with groups of people about what we wanted to achieve, and almost everyone was really trusting and receptive to it.

Never assume. Having said that… this one was very specifically blocked and choreographed. Even though there’s no actual dancing, I worked with Supple Nam on this to get the timing of everything to just where I wanted it. Lots of the match cuts and transitions were blocked out by me on paper beforehand, so we plotted around those and then dressed in all of the other, erm, 'activity' around them as we shot.

"Olly went on trust that it wasn’t going to seem like a drab supermarket parking lot in the middle of nowhere. Ultimately, we share an affinity for what we think is visually exciting."

It was all intricately planned, so there are more anecdotes about that process than about the actual shoot; I spent a lot of time talking about the layers of clothing and how they were going to peel off beforehand with Hannah. She and I had very straight-faced discussions about the nature of what was sexy, and how we wanted to dress people in clothes that you could imagine the feeling and texture of as you watched.

Having said this, a Behind the Scenes crew caught some off-camera body popping, so I’m sure that’ll be turning up on YouTube in the near future…

You’ve now worked with Years&Years on several projects in the past year. What’s the secret to the success of your relationship?

We trust each other. I trust that Olly is a very natural and instinctive actor as well as a great performer. So, with seemingly no effort he can bring a lot of believability to a scene that is otherwise totally surreal. It’s hard to understate how important that is for a director.

And I know that he couldn’t quite picture how the car park sequence was going to play out until he saw an edit, but he went on trust that it wasn’t going to seem like a drab supermarket parking lot in the middle of nowhere. Ultimately, we share an affinity for what we think is visually exciting. Olly’s said on a few occasions that he feels like I can see inside his brain, which is very flattering.

Beyond that, I’ve taken time to get to know Olly and Mikey and Emre individually, so I know what they’re comfortable playing, and that lets me craft little roles and moment for them which they’re going to enjoy, and which are going to resonate with viewers and feel natural.

Any other grand projects planned with Olly and Years & Years?