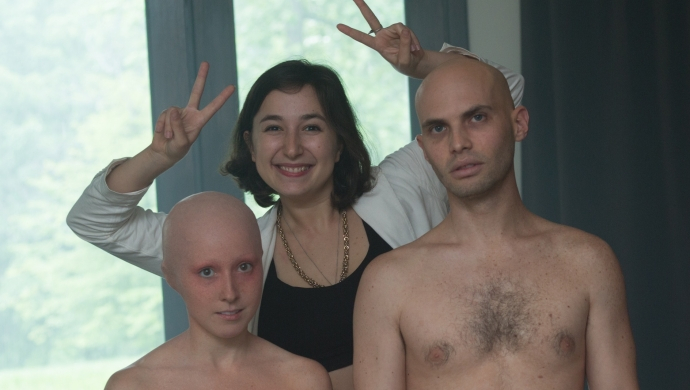 28 year old Allie Avital grew up in Queens, New York, and was exposed to the wonder of image-making with music at a young age - her father is a set designer for opera, and as a child she would be taken to dress rehearsals of productions he was working on at the Met.

Later, Allie studied fine art at Bard College in upstate New York, and started making multi-media installation art. As these experimental pieces involved live performances involving composers, musicians and actors, and then also video cameras, she eventually realised she could do this sort of thing for a living (sort of) as a music video director. As part of the collective BANGS with Owen Donovan and Steven Grisé, she built her profile with a number of well-received videos, before signing to Partizan as a solo director.

Allie likes to bring together the contrasting forces of high art and pop culture. "I grew up watching a lot of Tarkovsky and other Russian films with my family, so I've been accustomed to slow filmmaking which is sort of the opposite of music videos," she says. "But I'm also a massive Rihanna fan. So I think it's that marriage of the two that's most interesting to me."

And now the delightfully contradictory Allie Avital contributes to our very occasional Five Videos That Made Me series, taking us through the crucial videos in her directing career thus far...

1.  School of Seven Bells - The Night

This is my first video that ever got a public release.  I had just met Owen Donovan (DP) and Steven Grisé (Production Designer) and we heard that Genero.tv was doing a video competition for this track. I listened to the song once and immediately thought of Alexa, this charismatic 7 year old that I used to teach art to who looked remarkably like Alley, the lead singer of the band.  I imagined her performing the song in an earnest adult way, and something about that unsettling and somewhat perverse image stuck in my mind.  I was also coming out of a recent breakup so it felt particularly raw and relatable to have her sing about loss etc.

The shoot cost us exactly $10, and most of that money went to candy bars to keep Alexa awake and sugar-energized. At some point near the end of the shoot we even put a Kit Kat bar on top of the camera to keep her eye contact with the lens and it worked!  Her wardrobe came from Salvation Army on 'Half Off Day'.  So we really scrounged to make this one work!

A month or so after we submitted it to the competition, I woke up one day and it was all over the Internet that we won and it was the official video for the track.  It was pretty exhilarating - doing something that felt so personal and small and then seeing it in SPIN and Rolling Stone etc.  I later met Alley and Benjamin from the band, and a year later, Benjamin was diagnosed with cancer and passed away, so all of this added more of an intense emotional layer to the whole experience, as you can imagine.

This was one of those videos that kind of “made itself”, and yet still feels like a milestone for me. I always find it incredible in filmmaking that you work so hard on certain things that don’t go anywhere or get shelved but then certain projects just come out of you in this super organic way.  It’s like waking up from a dream and you’re just in complete awe that this thing got made and that nothing catastrophic happened.

This was a half-day shoot (which is pretty unheard of in music video world) on a freezing cold autumn day in a friend’s backyard.  I found this absolutely stunning German family of four kids, and then I cast the rest of the adults to look like they were related.  There were all of these dead leaves on the ground that ended up working themselves into the video, and the cast was absolutely brilliant.

When the little boy was eating the “dirt” (which was crushed up Oreos), he must have had a little sugar rush because he just started laughing hysterically, and then this collective hysteria kind of overcame the whole crew and the management and label people, and everyone just couldn’t stop laughing for 20 minutes or so while the kid just kept stuffing these crumbs in his mouth.  It was amazing and those shots made it into the video also.

The video was received extremely well and while this is a totally ridiculous thing to say, it almost feels like I gave birth to it and people tell me they love it and I’m like “thanks” but it was such a seamless and easy process from start to finish that I almost feel disconnected.  Or maybe it’s the Jewish girl in me that feels like I need to suffer for something to be worth it. Haha. But really it’s one of those projects that really gives you faith in the magic of filmmaking, when you set up the perfect situation and then allow things to just “happen”: the creation escapes your grasp in a certain way.

I’m putting this one in here because this one felt like one of the earliest videos in which I had a lot of creative control, but also the first in which I worked with an artist that was brave enough to explore some of the sensitive, uncomfortable, sexual themes that I’m interested in dealing with.

Leanne Macomber (the singer of Ejecta featured in the video) and I had a really extensive creative discussion leading up to this shoot, and I sent her tons of reference videos for her performance: everything from Faye Wong in Wong-Kar Wai’s 2046 (one of my faves of all time) to butoh dance videos.  We talked about her performance as being very experiential and authentic: coming from the inside out and not the other way around.  She invented an entire mythology about her character being born from a volcano and discovering her human body for the first time, and this was the narrative we committed to.

4.  The Pains of Being Pure At Heart - Simple and Sure

This video was my first Vimeo Staff Pick, and first video for a larger indie band from Brooklyn, with a slightly more manageable budget that afforded us a pretty large cast and crew.  At the time, I was feeling frustrated that I didn’t know After Effects and didn’t yet have the resources to get real VFX in my work, yet I was thinking about technology and digital culture a lot, so I had this idea that I could use actors themselves to create real human GIFs, and we wouldn’t need to do any of it in post.  I had just watched Buñuel’s The Exterminating Angel and was really inspired by it, so I decided to use that narrative as a starting point.

The most amazing thing about making videos in New York is that there are thousands of talented, diverse, and very humble actors that are excited to work on cool projects, and you can really assemble a bunch of curated characters for ensemble casts like these.  The cast is made up of a mix of professionals and non-actors: musicians, screenwriters, a retired businessman, etc. from Spain, France, Moldova, Puerto Rico, Russia, Romania, Italy, and more.

It was a challenge to teach them the small movements, because actors are used to being dramatic and working in large gestures, so it was against their instincts to move like live digital images, but once they got it, it kind of became the physical language of the shoot, and by the end of the 12 hour day, it almost became second nature for them.

I met Arthur [Ashin, aka Autre Ne Veut] about three years ago and we did a video for Ego Free, Sex Free – one of the songs from his last record. We became really close and started cultivating a creative dialogue, so the three videos we've made for this record were borne out of discussions we were having over the course of a year. We have very similar aesthetic sensibilities and both interested in pushing things conceptually in a way that might not always be safe. We were able to dig a little deeper into what his music was about, what he wanted to say as an artist, as well as what I wanted to say.

I was there when the photoshoot was happening for his album cover, which has two marble figures holding up a piece of glass. While on that shoot I noticed one of the guys during the lunch break, basically naked, painted like marble (wearing exclusively a cock sock - a sock tied with a plastic bag around his penis) and he was just sitting there eating Pad Thai noodles... And I looked at him and thought ''this is an amazing scene.'' For months I just held that in my head, and that’s how the Age of Transparency video came about. It became this nightmarish vision of these stone people in an office.  Even on set, I thought it was really important that the noodles were Thai noodles! I just wanted there to be cohesion, you know?

The Panic Room video was initially inspired by this video that Arthur showed me, from Swedish Idol. They have the most amazing three judges that are just such caricatures, and then there's this girl that comes on and sings. What's amazing is that they all seem very moved by it and she's pretty good, and you watch their eyes fill with tears and then in the end they're suddenly like, 'Nope! You didn't make it!' And she says, thank you and leaves. It's so heartbreaking!

Arthur, in his music, talks a lot about failure and the inherent failure of being an artist and trying to express yourself as well as the failure of trying to be transparent and honest. The Panic Room video is a meeting point of all those ideas in a way.

But I would probably say that World War Pt 2 is my favourite video I’ve done. It was a difficult production but ultimately the creative process felt really pure and intimate in the way that I want music videos to feel. It was a rare opportunity to do something where both me as a director and Arthur as an artist pushed ourselves to our limits, which is a difficult thing to do in this industry, considering all the elements that have to fall into place.

I think a lot of magic came together to make that video. We had some production issues the day of the shoot, and the house where we ended up shooting only fell into our laps in the middle of the day and we had to start shooting eight hours later than scheduled. So it felt like the universe was kind of on our side in an almost religious type of way!

• Allie Avital is represented by Partizan

Trish Sie on OK Go's 'Upside Down' video: "I was petrified of this one!"