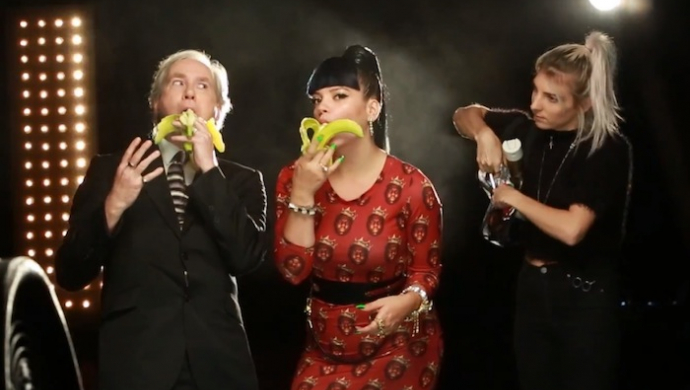 We spoke to Chris Sweeney, director of Lily Allen's Hard Out Here video, a couple of days after the video had dropped and created a sizeable media storm. So just as the official Behind The Scenes video is released, here's what Chris has to say about the making of the video, interpreting Lily's witty critique of sexism in the pop music biz, and the promo's lightheartedly satirical take on the conventions of the classic hip hop video...

PROMONEWS: Are you enjoying all the attention being directed at the Lily video?

Chris Sweeney: It's quite an interesting position to be in. It's almost like you have ringseat seats, while being invisible. Apart from the odd person on Twitter, no-one out there thinks that I made it. As far as they’re concerned, Lily made it. And when you do a video for a song that has the lyrics that it does, you’re putting the icing on the cake with the video. It’s not like she wrote the classic pop song and I said ‘why don’t you subvert everything’. Then I would be much more accountable.

But it’s great. You make things all the time and if people respond to them that’s fantastic - because often you set out to do something and it doesn’t work. This does what it was meant to, so I couldn’t be happier.

What about the negative reactions, including the view of the Guardian columnist who described the video as racist?

If something happens I can write down for you what will happen next. The video will come out, some people will like, there will be backlash, some people will say ‘it's this’. The racism criticism is punchy, and I am disappointed. As Lily has said, it's got nothing to do with race. The problem is that people have said that she [Lily] asked for black girls to be in the video. She didn’t. And we did the casting, so girls actually came to the casting and we picked the best ones. For me it was always about what’s going on at the moment in terms of women being represented in pop.

How did the process start - what was the brief?

It was like: "she’s back, and we want to do something big and potentially subversive". So when I listened to those lyrics I said "why don’t you do something that ostensibly looks like you see on TV, but with each set-up you’re punctuating it in some way, or making everyone think about it." But not to be pompous about it - that was really important. I’m not Julie Burchill, I’m a music video director, so I’m not in the right position to say "this is wrong". I work in that industry, and these things go on. Not in my work, but it does go on.

We met before and talked through what would happen – essentially an extension of my treatment. And then I did storyboards and took her through them. And Lily and I talked about the fact she's complicit in this world. In the video we didn’t make her stand there sneering. The manager character only ever addresses the girls as a group, she’s included in that group. She never separates herself from them – and she does it as well. Because that’s what you do have to do. Not necessarily twerk, but you need to lose some weight when you’re releasing a single, and so on. And it would be so false and not as pertinent if she was going "urgh" from the side. Becauase what do you do for your next video?

Was the prologue a way of getting around that, making Lily's distaste more obvious?

Not really. We started talking about botox, and then she said "lets make it gross". So I suggested that we do liposuction. She wanted to put that in the middle of the video, but I said we should put it at the beginning, to set up what’s going on. We had an idea of what they would say and they came up with most of the dialogue on-set. The actor playing the American manager brought a lot to it - he came to to the interview in character and stayed in character for the whole day, but I think he’s actually English.

Of course we’re caricaturing what actually gets said, but I think its more interesting if it's funny. I’m not saying its laugh out loud funny, but you engage people more easily.

Was Lily anxious about this being her big comeback video?

From what I’m reading from talking to her, not at all. It was more like "right, what are we doing here?" and then her just going for it. She knows what she’s doing and how to do it. I think she enjoys making videos. She comes alive when she shoots them, she comes to the edit and we had loads of fun talking about the clothes.  Some people really like that visual side, some people don’t get it. She’s definitely someone who gets it, and likes to be involved.

Yes – that was her idea, of course. I suggested that we did something with balloons, to nod to Blurred Lines. And she agreed, and said that it should spell out ‘Lily Allen Has A Baggy Pussy.’

There is lots of product placement in the video which is treated in an almost satirical way in itself. How did you get away with that?

It’s a bit of a weird one. We obviously couldn’t take the piss out of brands. You can’t take the money and not give them what they asked for, that’s clearly unfair. But the brands wanted it to be fun. We showed them what we were doing, and made some suggestions - getting them to lick the Beats box, for example – because otherwise it wouldn’t have weaved in with the rest of the video. The section with the Fuji camera - Lily made all that up on the day. It was the end of the day, and we were just mucking around and they really liked it. Then they gave me the camera - and then they took it back!

So you’ve had some fun - and the video has arrived when there is a bit of a feminist backlash going on, in the wake of Robin Thicke and Blurred Lines. Is this going to help make the music industry less sexist?

I don’t think anything could now – everything is too fragmented. It's very tough to get one voice driving things forwards. In the same way that no-one watches the same show on Saturday night, you can’t really gain momentum. Or if you do, its over in three days. So for me I don’t think it will change it. Having said that, if you were someone who didn’t want to do that kind of thing, said "I don’t want to do that", then I think you'd have more back-up now.

The conversation is being had, it’s obviously pertinent to how people are feeling and that’s great. That comes from Lily. She said "I would just like it if each of my songs made people think." But it’s not a campaign – we’d be going about it the wrong way if it was!

They were one of the biggest directing teams of the Nineties, making videos for Supergrass, David Bowie, Smashing Pumpkins and others, but there's only one outfit that can …

Dave East's latest video for Foals finds the band in playful form. In fact, for Wake Me Up the …

Ben Cole & Odunsi (The Engine) direct a trippy promo for Half A Tab.