Behind The Video: Ebeneza Blanche on Jae5's Dimension with Skepta and Rema - "I wanted to show the real Ghana." 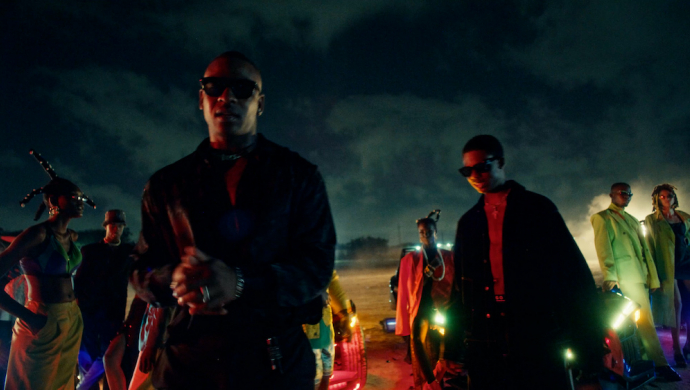 This is where Ebeneza grew up, and where he regularly returns to work, shooting both stills and film. And his background as a fashion photographer comes to the fore in a video that is packed with extraordinarily beautiful compositions, as well as highlighting each performer.

Filmed on location in and around Ghanian capital city Accra, the video for Dimension draws upon both the traditions and new vibrant flowering of creativity in this West African country.

We spoke to Ebeneza about the making of the video - his first since signing to SMUGGLER in London.

How did the project come about? Can you tell us something about your pitch for the video and how were you inspired by the track Dimension?

EB: My executive producer Elizabeth Doonan, and my rep Sam Davey at OB  thought of me when this song came up because I’d been traveling to Ghana quite a bit and working over there. Skepta has been one of my idols and I thought it would be a great opportunity to create something special. Thanks also to Kat Cattaneo the commissioner [at Sony Music] for making it happen.

With him being an OG... it felt unreal at times to give Skepta direction.

What was the appeal for Jae5 and the other artists of going to Ghana? How much time did you get with the artists to talk about what you wanted to achieve beforehand?

They were excited to shoot it in Ghana. I guess they wanted to shoot it with someone that’s quite familiar with the process there. I went to school there, and have been travelling over and back quite a bit for the past three years. So I knew I was the perfect fit to show its truest form.

Was it always the intention to show the contrast between Ghanaian tradition and modernity, and bring them together?

A lot of media shows off the bad side, or only shows it in an extremely flattering light. I didn’t want to do that. I wanted to show the real Ghana, the good and the bad. The modernity and the traditions.

What was it like working with JAE5, and Skepta and Nigerian artist Rema?

The thought of directing Skepta was very intimidating. You know, with him being an OG in the game it felt unreal at times to give him direction.

Rema was very easy to work with. He gave 110% in every scene. Whereas Jae5, being another industry veteran, was very calm and professional.

You’ve created a fantastic number of set-pieces in the video. Were these influenced by your photographic work? Previous times working in Accra? Were there other influences on the style of the video (ie other music video work)?

I think it’s my background in fashion, I always want things to look visually appealing and for each shot to have a strong meaning. Stylistically I wanted to keep to this fashion aesthetic that I always try to bring across in my work. I wanted every frame to be a picture, in a way where you can really digest the meaning behind the visuals.

I wanted to show the real Ghana, the good and the bad.

What were the specific aspects in Ghanaian arts and culture that you wanted to highlight in the video?

I wanted to highlight our traditions like the Adinkra symbols. Skepta’s line about respecting your elders made that really clear. It’s something so simple but something really ingrained in West African culture.

That’s why I envisioned him in that set up with a group of elders. It was a way for me to pay homage to the Ashanti kingdom and give an insight into those traditions that are still deeply rooted in us today.

How much prep time did you have in Accra before shooting? What were the biggest challenges in pulling everything together?

Honestly, things were pretty crazy. There were a lot of obstacles, schedules got changed around last minute, which compromised people’s availability.

At the beginning of the shoot it started raining and I almost gave up. But when it started pouring, the DOP, Jack Exton, showed up like Jesus, and everyone’s spirits just lifted when we saw that first money shot.

[Skepta] with a group of elders... was a way for me to pay homage to the Ashanti kingdom.

How long was the shoot? What was the most challenging shots to achieve – and the most rewarding?

The shoot was four days, but on paper we had planned three. The fourth day was just me getting all of the artsy shots that I wanted and I paid that out of my own pocket. But imagine we didn’t have that day? Imagine we didn’t have those shots in the edit? It was definitely worth it to bring my vision to life.

What were the highlights of the shoot for you?

It was amazing to have such a diverse crew and seeing them all pull their weight to make this project come to life. It was the most rewarding part of the job.

The extra day was me getting the artsy shots.... it was definitely worth it.

Are you satisfied that the video reflects the vision you started out for it?

What’s next? What are you working on now – and anything else on the horizon?

I am looking forward to exhibiting my debut film 20 Ghana this December. It’s my passion project and I’m very excited for the world to see it.

• Ebeneza Blanche is with SMUGGLER in the UK, and represented for music videos by OB Management