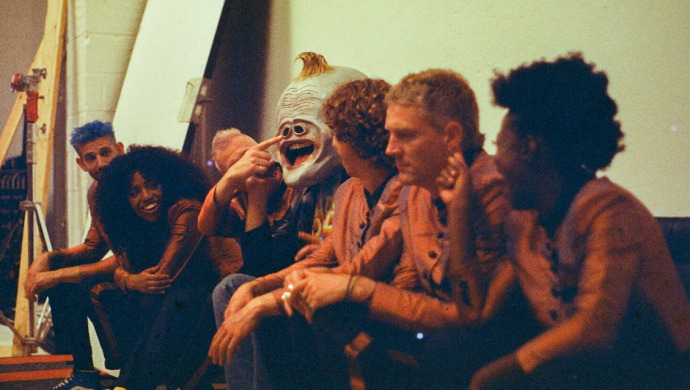 James (aka Ja) Humby is onto something with his live performance series Molten Jets. In outings for the likes of Horsey, Ross From Friends and King Krule he established the distinct style and mood of the series, which is not quite like anything out there: authenticity and deadpan humour take priority over slickness in Humby's series, and the results are cool and very rewarding.

The latest edition features the London band Franc Moody as unlikely (and very funky) lift attendants in a hotel lift heading for the stars, and this manages to strike the balance between a fully immersive and viscerally exciting performance of half a dozen tracks from the band's 2020 debut album Dream In Colour - the likes of which we have all badly missed during the past gruelling year - and a cast of supporting characters that lend it a party atmosphere, and an element of surreal comedy.

So what's going on here? With the release of a breathless one-minute BTS video of the shoot in which Humby and his crew in this Intergalactic Studios production somehow managed to shoot enough footage to create the 25 minute film, we posed a few questions to the man himself...

Tell us about the Molten Jets live series as a whole. How did the series get started? What’s the philosophy behind it?

I think Molten Jets was subconsciously created to avoid having to convince clean-cut professionals to take risks. There was no business plan. It's purely a creative outlet intended to entertain fans of the featured artists.

I try to approach these more like a live album recording than a film.

'Molten Jets' was initially a folder on my desktop containing an absolute mess of videos and sounds I'd made and the name was inspired by an unfortunate toilet episode that left me visibly shaken. I won't go into any more details on that, but I basically borrowed some cameras to carry out a couple of mega low-budget 'live shows' and it grew from there.

A lot of live performances - particularly TV broadcasts - don't sound that great, because they have no option to mix the audio afterwards. I try to approach these more like a live album recording than a film or broadcast, so the audio engineers are effectively more important than the director. I just jog around trying to convince people to do stuff until they eventually refuse.

My main soundy Justin Lyndley (Shame, King Krule, Horsey) actually taught me sound engineering before Molten Jets began and my mate Yigit Bülbul (musician & engineer) has been involved on a few too.

King Krule Live on the Moon was released through XL Recordings as a limited edition picture disc vinyl LP and Molten Jets released a track called Champagne from the Ross From Friends recording before that too. So there might be more of that to come.

How did the Franc Moody project begin?

They approached me as a result of the King Krule and Horsey videos, I think. The collaboration was initiated by a brilliant commissioner, Connie Meade. The band said friends often mentioned playing their songs in the background, which led us down the 'lift music' path and it quickly got out of hand.

Above: King Krule - Live On The Moon, the previous Molten Jets production before Franc Moody's Live In The Lift

I decided to set it in an infinitely ascending lift at 'Hilbert's Hotel' - run by immortal mathematician David Hilbert [featured in the film as the hotel manager]. It would've been nice to include more narrative, but we only had a day to film the whole thing. The band and management were definitely keen to create an upbeat party atmosphere and I hope we achieved that. They were great to work with and really down to earth.

It would've been nice to include more narrative, but we only had a day to film the whole thing.

Can you tell us more about the intriguing characters who become the band’s captive audience?

There are plenty of characters in my head, probably due to a chemical imbalance or emotional trauma, but it's fun to slip them into videos without making it about them. I think people panicked at times, like when the posh businessman was blocking every shot. But there's always plenty of options in the edit, so just trust me, alright?

Extraordinary makeup job on your final lift passenger. Was that designed created especially for the shoot?

Yeah, the alien head was crafted by a talented artist named Madeleine Ellis. I drew her a picture and she made it in a couple of days. I've also wanted metre-long winklepickers for a while, so she made those too. She paints flowers and animals most of the time, but can also make anything.

Fortunately everyone I've worked with has pretty much delivered one-take wonders.

What was your technical set-up for capturing the band’s performance?

I like to let the band play for quite a while before we start rolling. It allows time to get mic placement, levels and cameras set while the band loosen up. That's my excuse when producers are tearing their hair out anyway.

The locations are often on par with the upper floors of the Cecil Hotel, so I think the bands are happy to focus on rehearsing. Fortunately everyone I've worked with has pretty much delivered one-take wonders, but if they're unhappy with it, we'll go again. Otherwise I try to keep things as 'live' as possible.

Above: the alien lift passenger on set - head designed and built by Madeleine Ellis - with Ja Humby (right)

Camera setup all depends on the brief, but I generally have at least one main roaming camera in a three or four camera setup. Tom Wade, the DoP on Franc Moody (and King Krule) is great at looking after the camera department, and if there's one going spare, I'll jump on it to get 'unnecessary' shots of shoes, clothing, reactions, etc.

Did you have any specific requests or demands in terms of their performance?

As these videos are far more about the band than anyone else's 'artistic vision', I prefer them to (mostly) be themselves onstage. My demands are more crew-focused. Due to the nature of getting close to a feature film's-worth of content in a one day shoot, it's impossible to give everyone adequate direction on the day, but I'm an editor well conditioned in rescuing self-inflicted catastrophes. So again, just trust me, okay?

What’s your general principle in maintaining audience focus when the location and band set-up remains the same?

With the right budget I'd change the set/location more frequently throughout. But maintaining audience focus is almost entirely down to the music. Editing definitely plays a crucial part too though, so I'll never hang on a vocalist's face while the guitarist is playing an upside-down solo, unless a camera-op selfishly fainted or died at an inappropriate moment. It seems obvious, but people do seem to get it wrong.

Budding bedroom-musicians who idolise these artists are often the ones returning most frequently, so I try to make sure there's enough focus on fretboards, drum heads, etc.

It's purely a creative outlet intended to entertain fans of the featured artists.

You joined intergalactic Studios before you started making this video, what did they bring to the table?

Having Intergalactic Studios involved is a big help. As I had to produce and direct the King Krule one, I was on the phone saying "sorry" and "please" when I should've been storyboarding the intro. Now someone else is apologising on my behalf. Tom and Rhory at Intergalactic both direct videos too, which makes communicating ideas easy. It was a relief to have Rhory negotiating budgets for frayed bootcut jeans and razor-sharp winklepickers, whilst politely encouraging me to rein it in.

Above: Vinyl issues of the recordings on previous Molten Jets shows for King Krule and Ross From Friends

We have seen you go from moon to lift, where will the Molten Jets Live series take us next?

The latest Molten Jets blockbuster Shame - Live in the Flesh has just been released and we didn't leave planet Earth on this occasion. In fact, we didn't even leave London. I can't go into any more detail on this while the gig promoter Chayse Bigwood remains under police investigation over VIP packages and unauthorised merchandise sold at the event.

Each Molten Jets video is tailored specifically for the artist/album, so I can't say where the next one will be set. Although, I do have some interesting locations reserved for when the time is right.

One thing's for sure though... until streaming platforms pay your favourite alternative artists more than 20p per year, buying music directly from them or their label helps to make this stuff possible!

Shan Phearon's appreciation of the power of popular cinema has influenced his music video work for the likes of One Acen. and Ocean Wisdom. Now he has fused one of the most popular film genres with …